By admin on August 4, 2017Comments Off on AKSHAY KUMAR’S TOILET: EK PREM KATHA – A LOVE STORY WITH A REVOLUTIONARY TWIST! 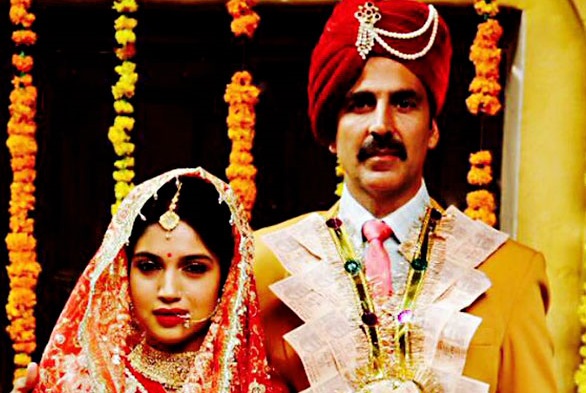 FACT: Over 50% of rape cases which take place in India happen when women defecate in the open

FACT: 60% of the people in the world not exposed to toilet facilities are based in India, with a whopping 564 million Indians defecating in the open

We’ve all heard that love can move mountains, but imagine if every love story created a nationwide revolution for the good of society; the world would be a scintillating dream.

International megastar and National Award-Winning actor Akshay Kumar is set to deliver not just a movie but a movement, with his next film TOILET: EK PREM KATHA (Toilet: A Love Story), not only a cinematic treat that tackles hard-hitting social taboos through the lens of satire, but a latest statement of his intent to galvanise modernisation and equality in his home country,

Set against the backdrop of Indian Prime Minister Narendra Modi’s initiative to improve sanitation across India, ‘Swachh Bharat Abhiyan’ (‘Clean India Movement’), TOILET: EK PREM KATHA is a satirical and light-hearted take on open-air defecation in India, and the fundamental need to provide households across the nation with a functioning toilet.

Aiming to tug the hearts of every single lover, who is willing to go to any lengths for their beloved, TOILET: EK PREM KATHA portrays the real-life love story between Keshav from Nandgaon (Mathura) played by Akshay Kumar and Jaya from Barsana (Mathura) played by Bhumi Pednekar, whose love transcends across barriers of society and tradition but is challenged by the most unexpected hurdle, a toilet. Conflict comes knocking on the first day of their marital life, when Jaya leaves Keshav’s house for good, after discovering that there is no toilet. With Jaya resolute against the village tradition of females gathering in groups to defecate in public before sunrise or after sunset, Keshav sets out on a mission to win back his love – by battling against the age-old values of his country.

The upcoming Hindi-language film is directed by Shree Narayan Singh, best known for his work editing smash hits such as Baby (2015), M.S Dhoni: The Untold Story (2016) and Rustom (2016), and co-produced by dream team Neeraj Pandey and Akshay Kumar himself. The ensemble of cast is led by Akshay Kumar, who is joined by Bhumi Pednekar (Dum Laga Ke Haisha), Anupam Kher (Bend It Like Beckham, Silver Lining Playbook) – to condense a star-studded cast. TOILET also marks the 20th film which has Akshay Kumar and Anupam Kher join cinematic forces.

Akshay Kumar continues to emerge as a pioneer for social renovation in India, using his filmography and humorous craft as a mouthpiece to highlight a series of relevant issues throughout the country. A basic luxury often taken for granted by most of the world, the lack of lavatory facilities in India has long been a critical talking point. TOILET: EK PREM KATHA comes as a result of some extremely damning statistics: 60% of the people in the world not exposed to toilet facilities are based in India alone, that’s 564 million Indians defecating in the open due to lack of facilities.

As well as being a major health, hygiene and environmental concern, open defecation is also accountable for over 50% of the rape cases in India. TOILET EK PREM KATHA is the true story of millions of women in rural India who till date, kilometres away from their homes just to be able to relieve themselves. At break of dawn or fall of dusk, these women face the risk of rape, molestation and/or kidnapping – an inconceivable threat for most of us when routinely going to the toilet. The film spotlights women safety, basic dignity and privacy which form the helm of an ever-growing urgency to address India’s open-air defecation issue. It’s also the crux of the love story between Keshav (Akshay Kumar) and Jaya (Bhumi Pednekar), whose love transcends across barriers of tradition yet is challenged by the most unexpected hurdle, a toilet.

A revolution in the making, TOILET: EK PREM KATHA uses humour to educate the world and bring to light the issues surrounding sanitation and women safety in India. Not to be missed, be sure to catch the film’s release internationally in cinemas on 11th August by Reliance Entertainment and KriArj Entertainment. And remember, don’t forget to flush!

AKSHAY KUMAR’S TOILET: EK PREM KATHA – A LOVE STORY WITH A REVOLUTIONARY TWIST! added by admin on August 4, 2017
View all posts by admin →