By admin on November 15, 2014Comments Off on Australia and the Gum Tree

Member of the Eucalyptus tree genus dominate the tree flora of Australia. Gum tree is the common name used for tree genera of Eucalyptus. Gum tree is one of the most adaptable trees and found common in Australia. Being uniquely Australian, it is recognised as an Australian symbol worldwide. . In the late 1800’s Victorians were referred as ‘gum suckers’, South Australians as crow eaters, Queenslanders as Banana benders and the Western Australian’s as sand gropers. Gum tree even aroused patriotic feelings among Australians at the time of first and second world wars. 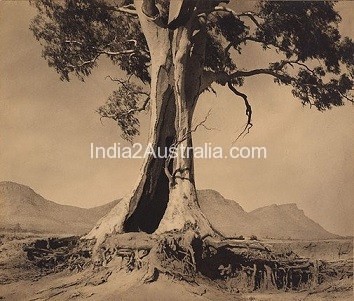 In year 2000 for the Sydney Olympics opening ceremony Gum tree leaves were burnt to create a uniquely Australian ambience. Harold Cazneaux’s 1941 photo of Gum tree was even described as a representation of Australian spirit of endurance. The celebrated photographer Harold Cazneaux in 1941 published the epic shot of a monumental, long suffering river red gum in the desert that has become one of his signature photographs. Cazneaux called this photograph his ‘most Australian picture’. The tree still stands at Wilpena where it is now known as the Cazneaux tree.

The wide spread perception that the British colonists found the Gum trees ugly, aroused a sort of nationalism around these much adored trees. It even represented national pride. During the Second World War, diggers received dried leaves of the Gum tree from their dear and near ones in Australia as a reminder of their home land.

The presence of Gum trees even added an aura of significance to some of the most visited areas of Australia. Blue Mountains of NSW is densely populated with Eucalyptus trees. The atmosphere there is filled with finely dispersed droplets of oil, which together with dust particles and water vapour gives the impression of blue colour around it. The Blue Mountains, got its name due to the blue haze that covers the area.

It was in 1788 the gum tree genus was named as Eucalyptus by the FrenchBotanist L’ Heritier. ‘Eucalyptus’ is a combination of Greek words meaning ‘well covered’, in reference to the cap protecting the bud. In the same year Surgeon General John White who arrived in Australia in the First Fleet recorded the presence of olfactory oil in the eucalyptus which can be a substitute for peppermint oil. It was Joseph Bosisto, a Victorian pharmacist, who explored the possibilities of producing Eucalyptus oil commercially. Bosistos Parrot Brand Eucalyptus oil was born. He collaborated with von Meuller and began producing eucalyptus oil commercially in 1852, Bosisto commenced operations in a small, rudely constructed still at Dandenong Creek, Victoria. Bosisto began exporting the oil to England in 1865.

Gum trees are highly flammable due to volatile and highly combustible oils produced by the eucalyptus leaves. After a forest fire they are quick to regenerate too. Some species of Gum trees drop their branches unexpectedly. This has resulted in some councils issuing warnings, against camping under river red gums.

Kookaburra sits in the old gum tree,
Eating all the gum drops he can see.
Stop Kookaburra, stop Kookaburra
Save some there for me!

Kookaburra sits in the old gum tree,
Counting all the monkeys he can see.
Laugh Kookaburra, laugh Kookaburra
That’s not a monkey, that’s me!

Australia and the Gum Tree added by admin on November 15, 2014
View all posts by admin →