By admin on July 27, 2012Comments Off on Australian English 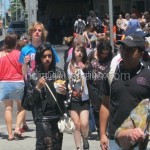 English is Australia’s de facto official language, despite given no official status in the constitution. Australian English is recognised to be different from British English. The reason being, the early settlers included people from all over the British Isles such as Ireland and South East England, each speaking different dialects. Among the early settlers were 25% of the convict population Irish. There were other significant population of convicts from Scottish Highlands and Wales. The intermixing of different dialects made Australian English unique.
Australian English also has the influence of Aboriginal languages. Many of the Australian slangs have roots in Aboriginal languages. For example: Hard yakka means hard work and is derived from yakka, from the Jagera/Yagara language once spoken in the Brisbane region. Aboriginal language influence is especially evident in the name of places and fauna in Australia. For example: Australia’s capital Canberra is named after a local language word meaning,”meeting place”.
There are a few notable regional variations too. Swimming clothes are known as cossies or swimmers in New South Wales, togs in Queensland, and bathers in Victoria and South Australia.

Australian English added by admin on July 27, 2012
View all posts by admin →