By admin on January 12, 2016Comments Off on How to buy $1400 Million USA Power Ball in Australia & make your life a living hell if you win 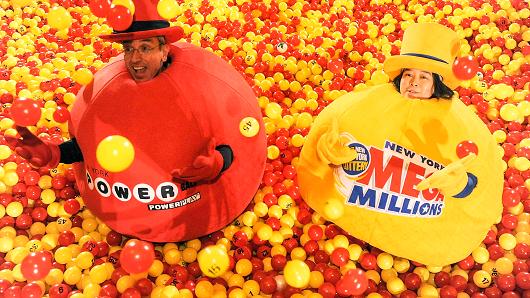 The Biggest Jackpot in the world has grown to $1.4 Billion. This is the first time US Powerball has grown to such a massive amount. The winner has the option to take a lump sum payout of $867.9 Million or can opt to receive the entire jackpot in annuities over 30 years.

USA Powerball jackpot has 9 prize levels including the jackpot. So if you don’t win the jackpot; still there are many cash prizes, which will make you rich. The jackpot has ballooned to the Billion mark after the lady luck took a day off in the last Saturday night’s $900 million drawing.

[stextbox id=”alert”]But beware: the odds of winning the jackpot is 1 in 293 million. The previous record for a US Jackpot was $656 million.[/stextbox]

Aussies can purchase US Powerball tickets online by clicking this link. http://www.wintrillions.com/play-powerball.php

But winning such a massive amount, has a potential to make your life a living hell. Too much of anything is bad.

Winning the lottery can make your life a living hell

The first known kidnapping for ransom in AustraliaN history is related to a lottery win. The 1960 kidnapping and murder of Graeme Thorne for the money that his father Bazil Thorne had won in a lottery.

The NSW Government in 1960 initiated a lottery to fund the construction of Sydney Opera House. The £100,000 jackpot was won by Bazil Thorne. On those days there were no option for privacy and Sydney newspaperS published the news in front page. Graeme Thorne, son of Bazil Thorne was kidnapped and murdered for a ransom of £25000.

The big money has destroyed the life of many a lottery winners in a short span of time after they won the lottery. A few examples are below

Michael Carrol won £9 million in 2002 when he was just 19 years old. He was working as a garbage man at the time of the winnings. Money made Michaels life a living hell. He splurged all his cash on drug fueled luxuries. He was blackmailed by criminals. After discovering five of his Rottweilers dead, with their throats cut, Carroll paid blackmailers the equivalent of $230,000.

In 2010, Carroll was declared bankrupt and, in July 2013, British media reported that he was working in a biscuit factory earning £204 a week.

A successful businessman, Whittaker won US$ 315 Million in an American lottery. He donated $14 million to a charity he established. . In 2003, while he was frequenting a strip club, thieves broke into his car and escaped with a suitcase containing $545,000. Months later, robbers struck again, stealing $200,000 from his car, but this was later recovered. The same year, the boyfriend of Whittaker’s granddaughter, Brandi, was found dead at Whittaker’s home from a drug overdose. The following year his granddaughter also died from an overdose. In 2007, reports emerged that Whittaker was bankrupt after he claimed he was too breaking to pay a woman who had successfully sued him. In 2009, after the death of his daughter, he told reporters: “I wish I’d torn that ticket up.”

Pentecostal preacher Billy-Bob Harrell won $US31 million in a Texan lottery. He was plagued by strangers asking for money. After winning the lottery his wife divorced him. Money made his life a living hell. Two years after winning the life he took his own life. After his death, reports emerged that he had told a friend: “winning the lottery is the worst thing that ever happened to me”.

William post won US$16 Million in 1988. His unhappy brother hired a hitman to murder him. His girlfriend sued him and got almost 1/3rd of his winnings. When he died in 2006, he was living on disability pension. It was revealed that he confided to one of his friends, “I was much happier when I was broke.”

How to buy $1400 Million USA Power Ball in Australia & make your life a living hell if you win added by admin on January 12, 2016
View all posts by admin →