5 most famous Mosques in India

By admin on December 7, 2014Comments Off on 5 most famous Mosques in India

Islam’s entry to India began much before the Muslim conquerors. in fact, the history of Islam in India is as old as Prophet Mohammed himself. Islam was introduced to India through the Arab traders as early as 630CE. The Cheraman Juma Mosque situated in Kerala is considered as the oldest mosque in India. Malabar region at the southern coast of India welcomed the Muslim preachers and the first conversions believed to have happened there. From 10th century onwards, India was on the conquest list of Muslim invaders. With the entry of those conquerors India became a field for mass conversions to Islam. Whatever may be the view of historians about their conquest, they brought in Islamic architecture along with their customs and traditions. Today nearly 15 percentage of Indians are Muslims and mosques play a major part in the community’s religious and cultural adaptation. Here we are giving a brief explanation on the five most important mosques in India. 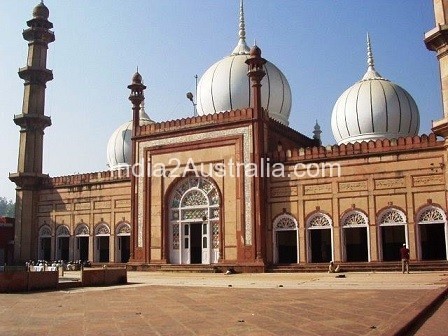 Jama Masjid in Delhi, built by Mughal Ruler Shah Jahan is one of the biggest mosques in India. The mosque was opened for prayers in 1656 AD with the construction costs touching a whopping 10 Lakh Indian rupees at that time. The mosque took nearly 12 years to complete with a workforce of around 5000. The mosque was inaugurated by an Imam from Bukhara, present day Uzbekistan.

The mosque had a turbulent history since then. The British planned to destroy the Mosque in 1857 after they crushed the Indian rebellion of 1857. For a short time, British soldiers were stationed at the mosque. In 2006 there was a bomb explosion and in 2010 the mosque was subjected to a terrorist attack.

The mosque has three great gates, four towers and two 40 m high minarets constructed of strips of red sandstone and white marble. The courtyard is big enough to accommodate around 25000 people. The mosque is built on an elevated platform with steps to reach there.  The floor of the masjid is covered with white and black marble. The mosque houses an age old transcript of the Quran printed on deer skin, the footmarks, sandals, and a red beard-hair of the Holy Prophet Mohammad. The mosque faces the Muslim holy city of Mecca. 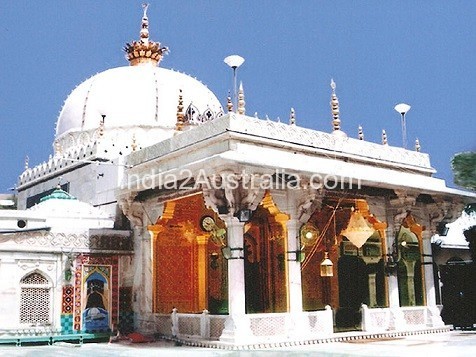 The Ajmer Sharif Dargah is one of the holiest Muslim shrines in India. It also houses shrine of Sufi saint from Persia, Khwaja Moin-ud-din Chishti. Keeping in line with the Sufi tradition of secular preaching, the mosque is open to people from all faiths. Khwaja Moin-ud-din Chishti visited India after Prophet Muhammed appeared in his dream and urged him to go to India. The shrine was built by Mughal King Humayun in honour of the saint. Emperor Akbar during his reign made pilgrimage to the shrine by walking from Agra every year.  Minars are erected at intervals of around three kilometres along the entire way between Agra and Ajmer mark the places where the royal pilgrims halted every day. Some of the construction inside the durga is done during the reign of Shah Jahan.

The Dargah Committee, appointed by the Government, takes care of the maintenance of the shrine, and runs charitable institutions like dispensaries, and guest houses for the devotees but do not care take the rituals of the main shrine.

By Air:  Nearest airport is at Sanganer 135 Km from Ajmer. There are flights from major Indian cities to Sanganer. Pre book cabs are available from airport to Ajmer.

By Train: There are many trains running along the line and Ajmer Junction Railway station the closest railway station.

Nakhoda Mosque is the biggest mosque in the city of Kolkata. It was built in the replica of Akbar’s mausoleum. A Kutchi Memon Jama’at leader Abdur Rahim Osman financed the construction. He was a merchant marine aristocrat. So, the mosque was named Nakhoda, which means Mariner. It can accommodate about 10,000 people. It is located in Jacquaria Street close to the intersection of Mahatma Gandhi Road and Chitpore Road. Abdar Rahim Osman who was the resident of the Cutch, laid the foundation of the mosque in 1926. Nakhoda mosque is built on the lines of Akbar’s tomb in Sikandra.

The masjid is decorated very gorgeously during the Muslim festivities.  There is spacious hall for prayer in the mosque. There are two minarets and a dome. There is a wonderful exhibition hall that displays amazing creative variety & embellishment of the Muslims. The visitors can purchase perfume made of floral fragrance and essential oils.

How to Reach Nakhoda Mosque

Mosque is just 10 km away from Kolkata Railway Station.

Babri Masjid located at the Faridabad district in Uttar Pradesh was built by Mir Baqi on the orders of Mughal Emperor Babur in 1529. Though the mosque is named after emperor Barbur, controversy surrounds on who built the mosque; some giving credit to Aurangzeb and some historians credit it to the sultanate time.  There is an ongoing dispute that Babri Masjid was built after destroying a Hindu Temple of Lord Rama. The issue boiled over since 1800’s and on 6th Decemeber 1992 Babri Masjid was demolished by Hindu Nationalist Groups in an effort to correct what they called a national injustice. 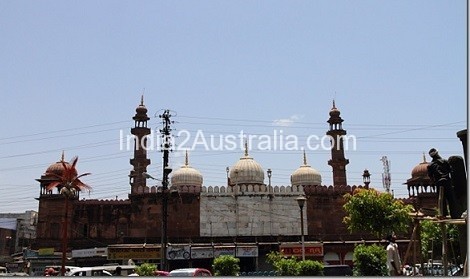 There are lots of monuments and the mosques with historical importance spread across Bhopal. No wonder Bhopal is known as the city of mosques. One mosque, though not large, but still considered as a very important place of Muslim worship is Moti Masjid built by Sikander Begum in 1860. It is though relatively smaller in size, of no less important in significance. Most interestingly, the mosque resembles the well-known Jama Masjid in old Delhi.

Moti Masjid stands regally in red color with front elevation made of white marble. The structure of the mosque’s two minarets has added  beauty to the edifice. Two small domes embellish the top.  The ‘namaz’ or ‘call for prayer’ is performed from the top of the minarets. The minarets of Bhopal Moti Masjid are so well designed, it gives the impression of a doorway from the Heaven to the Earth.

5 most famous Mosques in India added by admin on December 7, 2014
View all posts by admin →