By admin on February 10, 2013Comments Off on St Francis’ Church in Melbourne 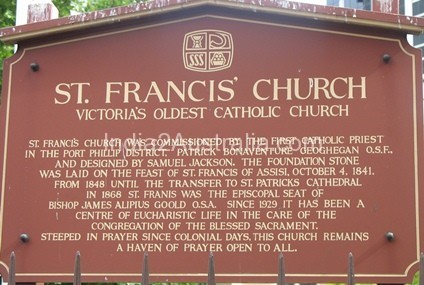 St. Francis Church is the first Catholic Church in Victoria and first Cathedral Church of the Catholic Archdiocese of Melbourne. It is the oldest Church on its original site in Melbourne. The site for the church was acquired on 1839 and mass and other services were held in a temporary wooden chapel while the church was built. The Church was named in the honour or St. Francis of Assisi by the first priest Fr. Patrick Geoghegan when he laid the foundation stone in 4th October 1841. Melbourne’s Catholic pioneers were relatively poor and there was not enough money to build the walls as high as the architect Samuel Jackson had intended. In 1850 front and eastern porches were added. The ladye chapel was constructed on the western side of the nave. The classical style semi- circular sanctuary was introduced in the late 1870’s. In the late 1990’s the church went major restoration of the entire building. 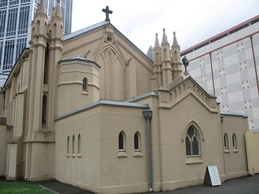 St Francis’ Church in Melbourne
The nave of the Church beneath the southern gallery was built in 1853 to accommodate a massive Bevington organ imported from London. The western side of the nave is the beautiful Ladyne Chapel built in 1855 and decorated over three years between 1856 and 1858. For more than 150 years, this small chapel has been regarded as one of the finest examples fo ecclesiastical architecture to be found anywhere in Australia.
St. Francis church became a Cathedral with the arrival in 1848 of the first Catholic Bishop James Goold. The St Mary of the Cross MaC Killop was baptised at St. Francis Church in 1842. Centrally located in the Melbourne’s CBD, St Francis’ has never lost its place as one of the city’s most popular and widely-used churches, and today is the busiest church in Australia, with more than 10,000 worshippers attending each week. Since 1929 it has been a Centre of Eucharistic Life in the care of the Congregation of the Blessed Sacrament.
St Francis Church Mass timings and other current information please visit the Church website http://www.stfrancismelbourne.org.au

St Francis’ Church in Melbourne added by admin on February 10, 2013
View all posts by admin →