By admin on October 28, 2013Comments Off on Halloween in Australia 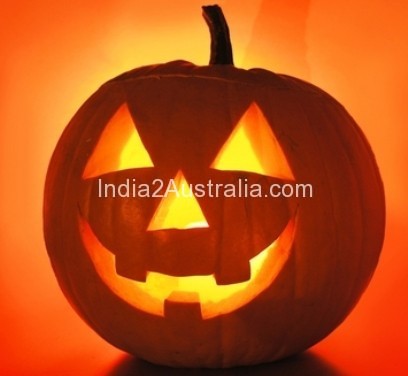 The ‘unwanted American Influence’, Halloween is gaining momentum in Australia, as  retailers spot an opportunity to sell their goods.  They are counting on the European lineage of majority Australians  in bringing Halloween to Australia. Nowadays it is becoming a common sight in Australia, children taking part in trick or treat adventures that involve organised groups visiting neighbours. These children either receive a treat or present a trick to the neighbours.

Halloween is observed on 31st of October annually, the eve of the Western Christian feast of All Hallows’ Day or All Saints day. Halloween is a contraction of hallowed evening or holy evening.

Should we celebrate Halloween in Australia?

Australia’s Celtic influence plays a part, among the families, participating in this tradition. But many associate  this as a celebration of harvest as in Ireland. But the fun part and the influence of American movies have found plenty of eager takers among children and teenagers.

A research conducted by McCrindle Research in 2011 showed a quarter of Australians (26%) planned to celebrate Halloween last year, with 8% certain that they would. Over half of those (51%) with primary school aged children planned to get spooky last Halloween and 7 in 10 (71%) Australians said we are celebrating Halloween more than we used to. Despite Halloween’s growing popularity, new research conducted by McCrindle Research in October 2012 showed that it still has a long way to go, with 2 in 5 (41%) seeing it as the “least meaningful” special event day of the year. In fact, just 2% of respondents rated it as the most meaningful to them. 45% of those who did not intend to celebrate Halloween in 2011 would not do so because they saw it as an American tradition.

This lucky country of ours, never turned its back to any celebration, as long as blokes can have a beer or two. For Halloween to be wholeheartedly embraced in Australia, we just need to add a beer drinking competition as an Australian addition.

Business organisation especially those specializing in marketing, increasingly organise Halloween themed parties for the staff and the clients. Many fund raising events are also taking place in Australia, popping the Halloween culture. It is a recent phenomenon; classified sections of newspapers sporting advertisements for ghost tours, hunts and walks.  The way it goes, it is certain that in a couple of years, the Halloween scare will become a part of the Australian psyche.

Home decorations are also becoming common during this period, with homes decorated with fake cobwebs, images of black cats and witches.  Grocery retailers like Safeway and Coles are also doing their bit to bring the theme to the kids. The new found interest in Halloween resulted in 30 per cent increase in the sale of confectionery and Halloween-related items in Australian supermarkets in 2012. Many party stores and costume shop have started advertising products ranging from Halloween themed decorations to clothing. In a way, Halloween is forced upon Australians by Multinational companies.

Trick-or-treating or guising involves ,children in costumes travelling  from house to house in order to ask for treats such as candy or money with the question “Trick or treat?”. Trick is a jovial threat to perform mischief on the house owner or their property, if no treat is given to them.

A jack-o’-lantern is a carved pumpkin, made by cutting removing the flesh inside a pumpkin and lighting a lamp inside to expose the hollow interior.

Apple bobbing is a game played at Halloween. A tub is filled with water and apples are put in the water, which will float due to low density. Children try to catch on with their teeth with arms tied behind.

Halloween in Australia added by admin on October 28, 2013
View all posts by admin →