By admin on October 8, 2016Comments Off on Hanging Rock of Melbourne 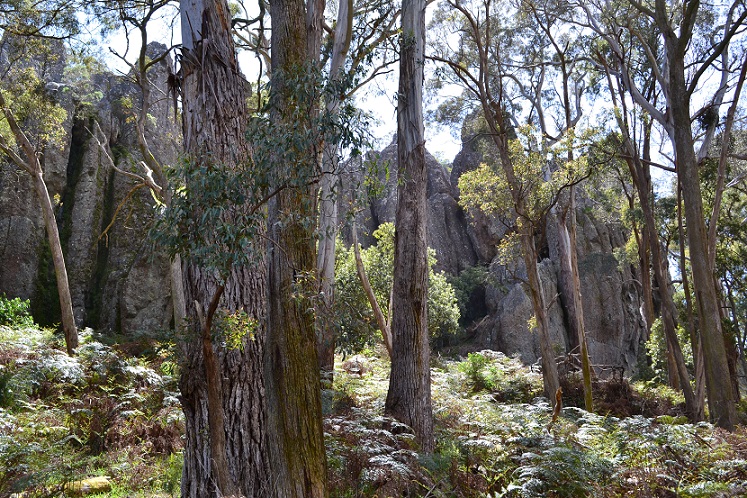 There is a natural wonder of gigantic proportions at Melbourne’s backyard largely ignored by tourists but swarmed by little daredevil adventure seekers accompanied by parents. Hanging Rock, (aka Mount Diogenes) is a rare volcanic formation near the townships of Woodend and Mount Macedon in the Macedon ranges.

We took the Calder Freeway on a fine Saturday morning on the backdrop of a rather dreary rain forecast by Meteorological department. Rain Gods stayed away throughout our journey, the place being one of the most important cultural centres of Aboriginal people. From Calder Freeway to National Hwy M31 and Romsey Road, runs for much of its length, a speed limit of 110km/h. On the way, once half-forgotten villages of pristine beauty, now scarred with Melbourne’s urban sprawl gives an impending warning of the ugliness of changing times. Woodend is a country town, once home to gold diggers and families when gold was discovered in Victoria in the 1850’s. Being in the foothills of Great Dividing Range, it is common to have snow falls in the area. Throughout our journey, we have noticed snow detection cameras installed on the side of the road to detect snow and warn passengers during winter. 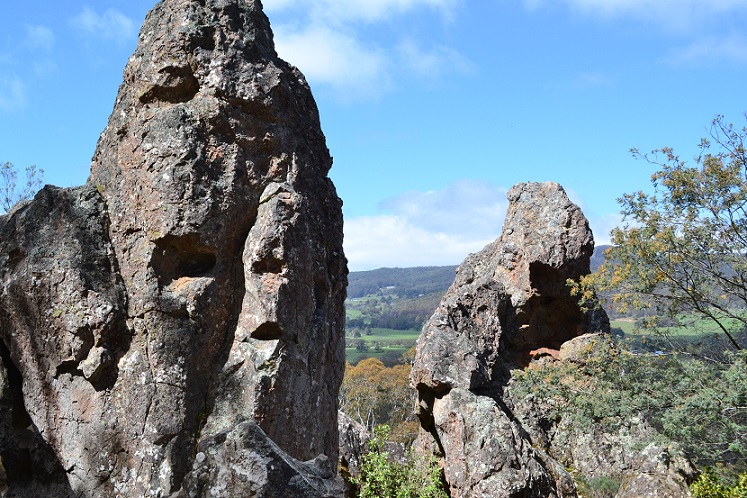 As we approached the site, a sixty – something year old man was standing at the entrance. We slowed the car down. “Good morning”, the man said in greeting. Cars have to pay $10 for entry. Just on the left was the parking area. Quite near to the parking area was the gallery. `Gallery has illustrated history of the Rocks and a few gimmicks to keep children entertained. 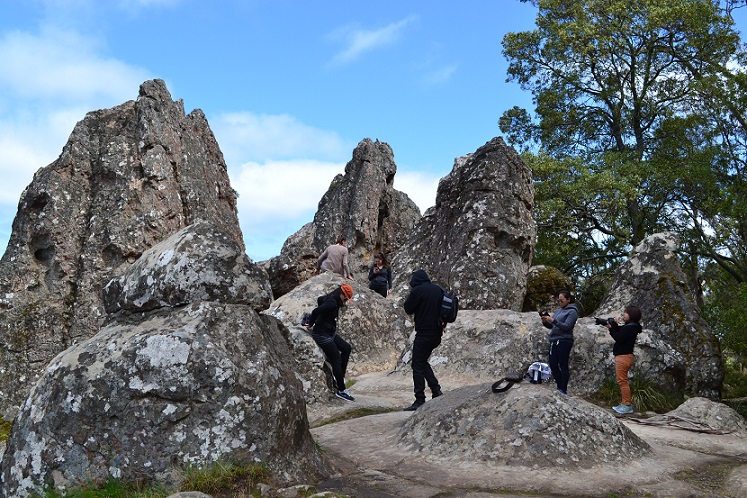 One of their exhibits –  a narrative of an incident happened on 14th February 1900, goes on like this. “A group of twenty girls and several teachers left a private girls school near Woodend for a picnic at Hanging Rock. They arrived at the picnic ground for lunch and were planning to leave about 5’0’ clock. An hour before they proposed to depart four girls took a walk to take a closer look at the rock. Long overdue only Edith returned to the distraught group in picnic grounds. She had no memory of what had happened at the Rocks. Meanwhile, a teacher had also disappeared. Searches over the next few days failed to find any trace of Miranda, Marion, Irma or Miss McCrow.  A week later Irma was found but also without memory. Within a few months the atmosphere created by the ‘College Mystery’ as the newspapers called it, caused the collapse of the school. Many of the students were withdrawn, most of the staff resigned, one girl died falling from the school tower and finally the headmistress suicided off the Hanging Rocks.” 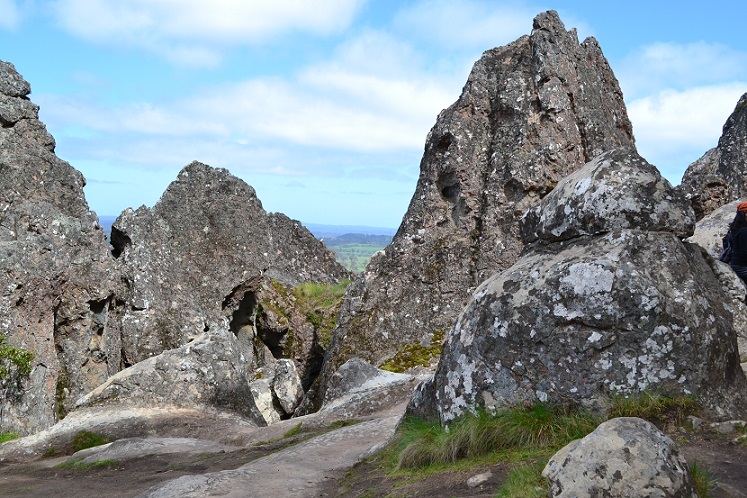 But in the whole narrative, they failed to mention that, it is a fictitious incident from a novel ‘Picnic at Hanging Rock’, which was later made into a movie, or I missed to notice. My whole time there, I was thinking about the ill fate of the school girls. Then my brain started to intervene with even bizarre theories. Was the place haunted by the Spirits of long lost aboriginal tribe’s men? Every squishing, shuffling and clackety – clack reminded me of the gazing but invisible eyes of the ghosts sitting somewhere on the boulders waiting for an opportunity. 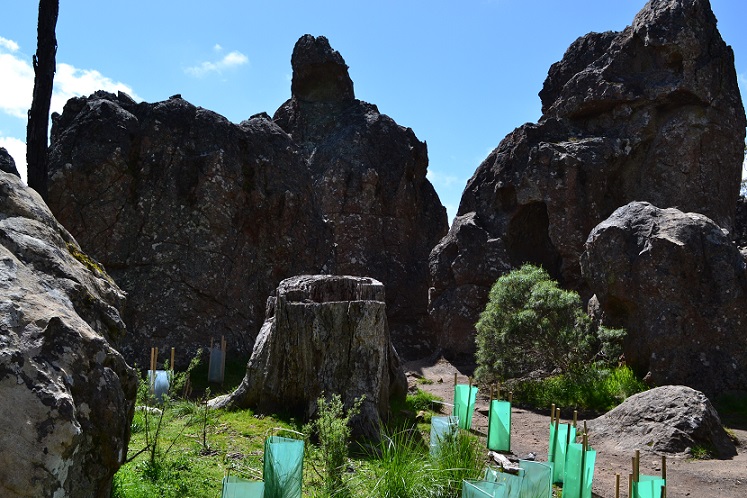 The little kid in front of me was largely unattended, the twenty something mother had another little one to take care while talking on the phone. The tarred road gave way to wooden steps, rocks one over the other make beautiful gateway for the visitors or pass. Though not mine, I kept my one eye reserved for the little devil in front of me. He looked more like an experienced climber, picking through the rocks to go up to the summit ignoring the paved track. While walking I disturbed a little bird that flew away. 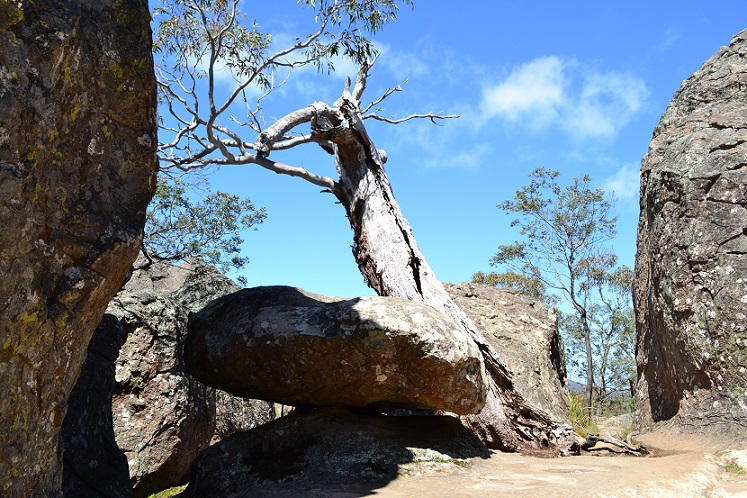 On the summit, the boulders were arranged in a rather mysterious way, giving the impression of a well-designed meeting place. A few teenagers with very high testosterone levels were trying their luck climbing the topmost point. 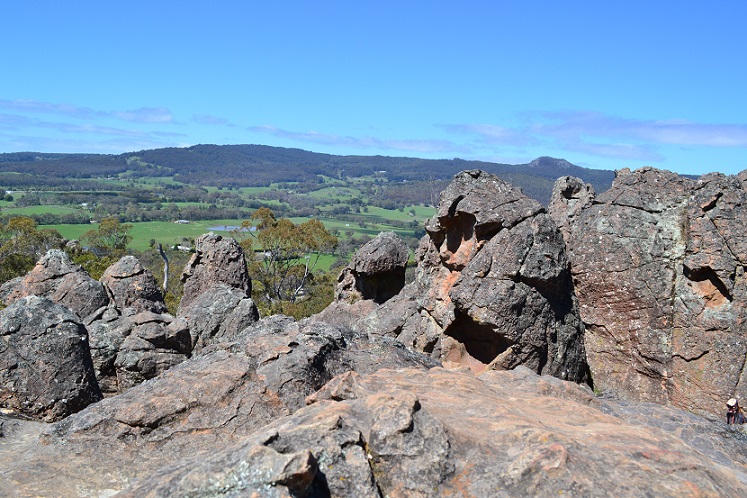 Hanging Rock is also believed to have frequented by bush rangers in their hey days. Their exploits included robbery on the gold fields in the form of gold escorts as well as highway robberies. Mc Donald or Mc Donnel was the leader of a band of bush rangers who was seen at the Camel’s Hump and later captured. Mc Donnel’s lookout on Hanging Rock is possibly named after him. He was supposedly buried a Wellington boot filled with Gold nearby. The naming of the feature at the Rock, “The Morgan’s Blood” has three possible origins: after the renowned bush ranger Mad Dog Morgan, after the James Morgan of the Keilor Gang, or after William Morgan a murdered coach driver. 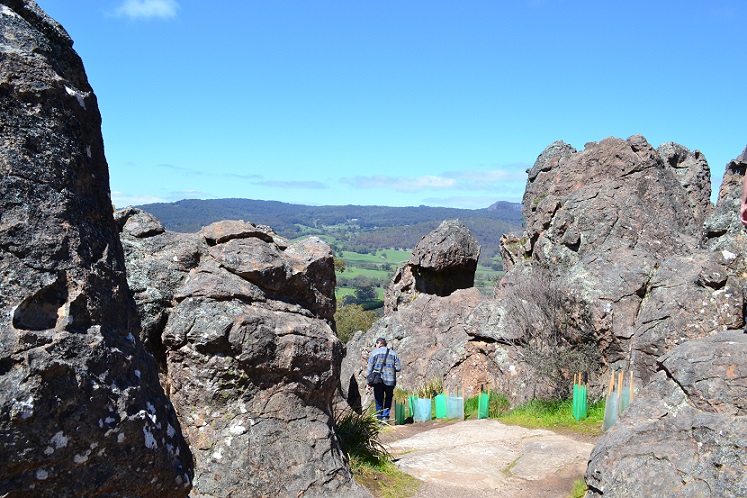 Hanging Rock also have been an important cultural centre for aboriginal people for hundreds of years. This was favourite camping site for the Edibolidgitoorong, a sub clan of the Wurundjeri. They were the custodians of the local area including the Rock and its surroundings. Hanging Rocks provided an excellent look out with several vantage points for monitoring weather and hunting conditions and maintaining the security of the territory. The rock possessed symbolic qualities which evoked powerful spiritual responses in local clans. Present day experiences are common among visiting aboriginal people who describe a sense of “unfinished business” at the rock, making it difficult for them to stay for prolonged period. (Information courtesy: “The Aboriginal History of Macedon Ranges” by Allen Maxwell)

Hanging Rock of Melbourne added by admin on October 8, 2016
View all posts by admin →