India’s Temple of Rats at Deshnoke

By admin on July 6, 2015Comments Off on India’s Temple of Rats at Deshnoke

Thirty Kilometres from Bikaner in Rajasthan, the village of Deshnoke, is famous for the Temple of rats. Rajasthan is a colourful place not just for its traditional costumes, but also for its temples, palaces and above all its people. For a first time visitor, the customs of this temple may seem rather bizarre, but they are thought provoking and amusing for all the right reasons. The temple is home to at least 20000 rats that are revered in the temple. 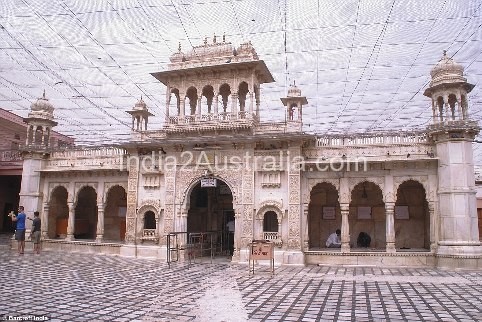 The rats are everywhere in the temple but mostly in the inner courtyard. They scurry all over the place even on the devotees, tasting the food offered to them. They are routinely fed grains, milk and oil in a large metal bowl. The rats inside the temple are called ‘Kabas’, which means little children in Marwari. The rats here are considered sacred as they are regarded as incarnations of Karnidevi’s descendants.

If a visitor happen to step on a Kabas and accidentally kills one, they are required to offer the temple a life size kabas in solid silver or gold.

The temple is dedicated to Karni Mata, a female Hindu sage born in the Charan Caste of Rajastan. She is believed to have lived between the late 1300’s to the early 1500’s. The legend says she was aged 151 when she mysteriously disappeared. She was the official deity of the Royal family of Jodhpur and Bikaner. During her life time she wielded considerable influence on both the ordinary people and the ruling class. She also helped the accession of three consecutive generations of rulers, Rao Ridmal, Rao Jodha and Rao Bika. She is believed to have laid the foundation stones of Jodhpur and Bikaner forts.

Karni mata is believed to have disappeared at the age of 151, returning after visiting the Maharaja of Jaisalmer. She was travelling with her stepson Poonjar and other followers. As they reached Gadiyala and Girirajsar of the Kolayat tehsil in Bikaner district, she asked the caravan to be stopped for drinking water. Mysteriously she disappeared.

There are many legends about the rats in the temple.

Legend has it that Laxman, Karni Mata’s stepson (or the son of one of her storytellers), drowned in a pond in Kapil Sarovar in Kolayat Tehsil while he was attempting to drink from it. Karni Mata implored Yama, the god of death, to revive him. First refusing, Yama eventually relented, permitting Laxman and all of Karni mata’s male children to be reincarnated as rats

There is another legend about the presence of rats in the temple. A 20,000 strong army deserted a nearby battle and came running to Deshnoke. Upon learning of the sin of desertion, punishable by death, Karni Mata spared their lives but turned them into rats, and offered the temple as a future place to stay. The army of soldiers expressed their gratitude and promised to serve Karni Mata evermore.

India’s Temple of Rats at Deshnoke added by admin on July 6, 2015
View all posts by admin →