By admin on March 4, 2016Comments Off on JHANJHARIYA NITE in Sydney for CYCLONE WINSTON Rehabilitation Project 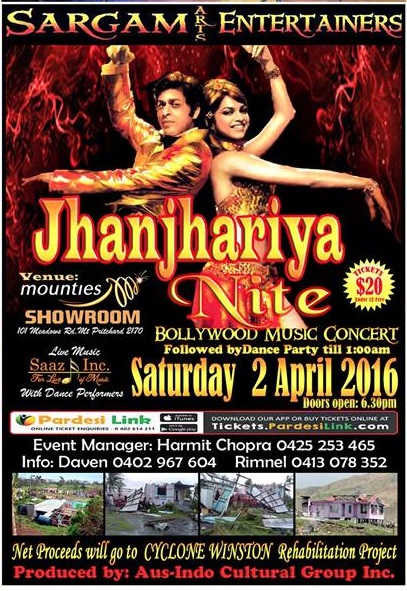 Tropical Cyclone (TC) Winston, the strongest on record in the Southern Hemisphere, hit Fiji on 20 February 2016 and its aftermath has left many families homeless, in financial hardship, losing hope of recovery, and it’s appalling to learn of 43 families losing their loved ones!

There is no short term recovery and it is widely promoted to support Fiji rebuild/recover in a three- phase Cyclone Relief Program for a:

– short-term period from now to 3 months

– intermediate period from 4 months to 12 months

– long-term period from 1 year to 3 years

Aus-Indo Cultural Group (ACG) wishes to congratulate many organisations and individuals who are providing relief assistance to cyclone affected families in Fiji. And we also appreciate that every organisation has its own special way of giving thus relief assistance schemes employed by each one of them are varied, which caters for the livelihood of a family who have lost everything they had.

The members of ACG have decided to divert the Net Proceeds from its 2 April 2016, JHANJHARIYA NITE CONCERT, towards its TC Winston Rehabilitation Project.

This project will be conducted at the ‘intermediate period’, 4 to 12 months’ time, which will allow time to process the accounts after the concert to determine the net proceeds and carry out a feasibility study to decide on a particular Rehabilitation Project to be undertaken at an area in Fiji that we feel is needing the required support!

We are not a charity, thus 2 April 2016 Jhanjhariya Nite is not a fundraising event. The members have undertaken to apply the net proceeds from this concert towards a particular project since we feel that our Association should play a role in helping rebuild Fiji.

The ‘JN Team’ is confident that with your support in ticket sales and sponsorships, ACG will be able to carry out a decent Rehabilitation Project for the cyclone affected families in Fiji!

After our hugely successful Bollywood Concerts, JHANJHARIYA NITE 2015 and DESI VOICE – SITARON KI AWAAZ 2015, our team is back with yet another dynamic Bollywood presentation on 2 April 2016 at MOUNTIES SHOWROOM.

ACG is coming back with JHANJHARIYA NITE 2016, a Bollywood musical extravaganza, presented by our major event partner SARGAM ARTS ENTERTAINERS, unmatched in Sydney for presenting and promoting shows of exceptional and mesmerizing quality.

Event details are as follows:

JHANJHARIYA NITE in Sydney for CYCLONE WINSTON Rehabilitation Project added by admin on March 4, 2016
View all posts by admin →

Most shared Whatsapp Messages
Saravanaa Bhavan Restaurant in Melbourne and Sydne...
How the Indian Origin candidates fared in NSW Stat...
What a migrant should do soon after arriving in Au...
African Cultural Festival in Melbourne
Indian Teen Rahul Kumar missing from Keysborough
International Kabaddi Tournament 2017 in Melbourne