By admin on June 26, 2016Comments Off on Karisma Kapoor in Melbourne 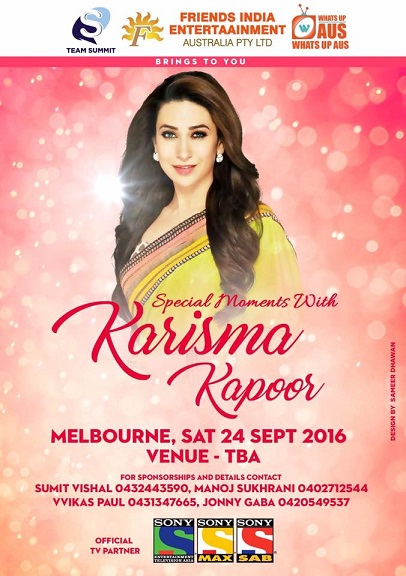 Daughter of Bollywood actors, Randir Kapoor and Babita, Karisma made her acting debut at the age of 17 in the Hindi movie Prem Qaidi in 1991. Karisma Kapoor received her first Filmfare Award for the movie  Raja Hindustani in 1996.  In the 1990’s she was one of the leading ladies of Bollywood.

During her career, Kapoor has received one National Film Award and four Filmfare Awards, among six nominations. Karisma also acted in some Television serials and also appeared as a judge in reality shows like Nach Baliye and Hans Baliye

Drinks will be available be at the bar at reasonable pricing

Karisma Kapoor in Melbourne added by admin on June 26, 2016
View all posts by admin →