By admin on July 25, 2016Comments Off on Magic Hour – Arjun Raina’s Dance Interpretation of Othello in Melbourne 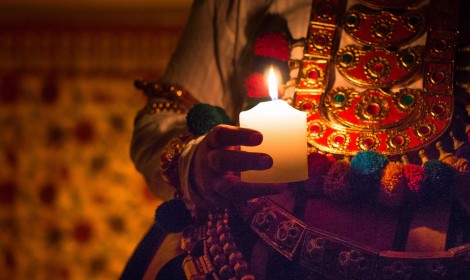 Created by internationally-acclaimed Indian dancer and actor Arjun Raina, who through the vibrant melding of traditional Indian Kathakali dance with the works of William Shakespeare, has astounded audiences all over the world. Trained in classical dance in India and in the British acting tradition in London, Raina is ideally placed to bring the two cultures together, and for his current production he introduces further elements – “Odissi”, the oldest surviving dance form from India plus performers of avant garde Japanese dance forms, “Butoh” and “Bodyweather.”

Together with previous collaborators including local Australian Butoh and Bodyweather dancers Helen Smith and Peter Fraser, Odissi dancer Lillian Warrum, and Indian- Australian actors Ezekiel Day and Cherian Jacob, the group uses the appropriation of Shakespeare’s text as common ground, fusing it with Asian art forms to create a post-colonial commentary on contemporary events through the playful subversion of an English icon. In the process a rich multicultural theatre has been created which will in turn amaze, amuse, stimulate and move audiences.

Arjun Raina’s previous work with Kathakali and Shakespeare has been performed at some of the finest theatre festivals in Europe including Kampnagel – Hamburg, Germany, where it was curated along with the work of Pina Bausch and Sasha Waltz and has since been translated into Japanese, French and Russian.

Lovers of Shakespeare, Asian dance and multicultural theatre will not want to miss this cutting-edge performance. Master Classes in Asian Dance will be taught by the performers in the lead up to The Magic Hour show.  Kathakali and Odissi workshops 22 August from 9am-5pm and Butoh and Bodyweather workshops 23 August from 9am-5pm. For tickets and more information visit www.footscrayarts.com

Magic Hour – Arjun Raina’s Dance Interpretation of Othello in Melbourne added by admin on July 25, 2016
View all posts by admin →