By admin on February 24, 2016Comments Off on Maha Shivratri celebrations in Adelaide 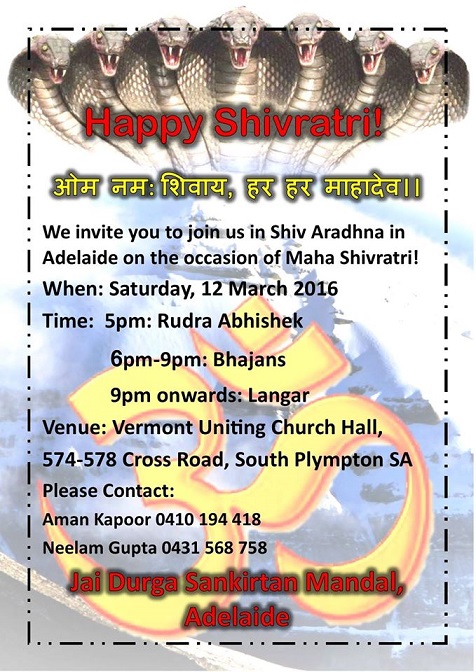 We hope to see you there with your family and friends to make this celebration spectacular!

Maha Shivaratri is a Hindu festival celebrated annually in reverence of the god Shiva. It is the day Shiva was married to the goddess Parvati. The Maha Shivaratri festival, also popularly known as ‘Shivaratri’ (spelt as Sivaratri, Shivaratri, Sivarathri, and Shivarathri) or ‘Great Night of Shiva’, marks the convergence of Shiva and Shakti. Maha Shivaratri is celebrated on the Krishna Paksha Chaturdashi of Hindu calendar month Maagha as per Amavasya-ant month calculation. As per Poornima-ant month calculation, the day is Krishna Paksha Chaturdashi of Hindu calendar month Phalguna which falls in February or March as per the Gregorian calendar. Of the twelve Shivaratris in the year, the Maha Shivarathri is the most holy

Maha Shivratri celebrations in Adelaide added by admin on February 24, 2016
View all posts by admin →