By admin on December 2, 2017Comments Off on Mohanlal Starnite in Sydney, Brisbane, Perth and Melbourne 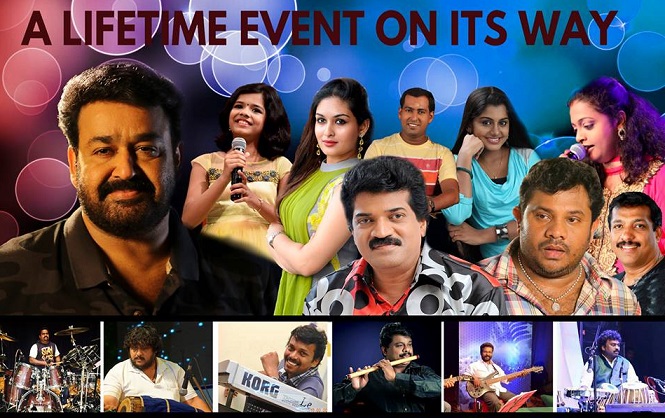 South Indian Mega Star Mohanlal comes to Australia for the first time for a star show in 2018.  Mohanlal Starnite with a cast of stars’ like

Mohanlal Viswanathan Nair is a Malayalam actor and Producer with a career spanning 4 decades in South Indian Cinema. With more than 300 films behind him, he is still the King in Malayalam film industry.

His entry to the filmdom as a Villain in “ Manjil Virinja Pookkal” a super hit of 1980, was a good start for both him and the Malayalam film industry. He brought in a welcome change from the typical “overacting actors” to the natural looking, guy next door feel to the Malayalam Cinema.

During his career he also bagged numerous awards which include, five National awards —two Best Actor, one Special Jury Mention and Special Jury Award for acting, and an award for Best Feature Film (as producer) and Nine Kerala state Film Awards. He was also bestowed with many honorary awards and positions like that of Lieutenant Colonel and Doctorates from many universities.

He has worked with all great movie directors of Malayalam Film industry like G. Aravindan, Hariharan, M. T. Vasudevan Nair, Padmarajan, Bharathan, and Lohithadas. With director Priyadarshan he has done 44 films. The super hit movie of 1987, ‘Nadodikattu’ was a turning point for Mohanlal as it showed he can do humour better than any other actor in Malayalam film industry.

Apart from being an actor, Mohanlal has also produced many super hit movies.

Mohanlal Starnite in Sydney, Brisbane, Perth and Melbourne added by admin on December 2, 2017
View all posts by admin →