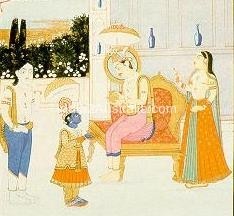 The Legend – Vamana with Mahabali

Onam –  a Kerala Festival is more or less a nostalgic feeling for non-resident Malayalees.  The new generation of Kerala kids from nuclear families, may never have experienced or celebrated Onam , the way the  baby boomer generation had experienced. While the way this festival is celebrated remains the same, the attitudinal change is reflected in the wholeness and togetherness it used to create among neighbours, families and friends. For example the main attraction of the festival is the flower mat (floral design arrangement) children lay in the front yard of their houses. Even today this practise is continued, but with a major difference. In olden days, the most fun part was the collecting of flowers for floral mat. Children collectively went around, singing songs and making merry collecting flowers. Today flowers are mostly bought from shops, resulting in much bigger and much better flower carpets. But the wholeness, togetherness and the happiness Onam brought has vanished without a trace.

But this change is not an overnight phenomenon.  If I turn the clock back by twenty years, I can remember my Grandmother complaining about the way we used to celebrate Onam . The other main attraction of Onam festivities is the OnaSadhya , which means the feast .  Preparing traditional Onasadhya is an elaborate process. My mother used to make sure that everything is ready by one ‘o’ clock at noon.  A stomach full of Kerala delicacies, we shared around the dining table were definitely counted as a celebration for us. But my Grandmother found that absurd; “What is the fun in you cook and you eat ? You should share it with those who can’t afford it, at least on a festival day like this –’.”  That was her way of thinking or I must say, the way her generation viewed Onam as a festival. One thing is sure; what Onam represents for Keralites today is not what it used to be  a hundred years back.  After all, the legend behind this festival is all about giving rather than partying.

The legend behind Onam

During the reign of Asura King Mahabali, Kerala witnessed its golden era.  People were prosperous and righteous.  Indra, the King of Gods, became jealous of  Mahabali, who was infact placed in this position by Maha Vishnu to contain the pride of  Indra. Indra approached Maha Vishnu to seek his help to overthrow Mahabali to ensure his supremacy.  Vishnu assumed the form of a dwarf named Vamana .  Vamana requested three steps of land from Mahabali to live in . Mahabali promised to give  the land to Vamana against the advice of Asura Guru Sukracharya.  Vamana enlarged himself to such dimension to stride over the three worlds. He measured earth with one step, heaven with the other, and Mahabali offered his head for the third step. , Vamana placed his foot on King Mahabali’s head and sent him down to the netherworld. Maha Vishnu promised to reinstall Mahabali as the King of heaven in another yuga and allowed him to visit his subjects once a year. It is this visit of Mahabali that is celebrated as Onam every year. People celebrate the festival in a grand way and impress upon their dear King that they are happy and wish him well.

The ten day celebration starts on Atham day and the next ten day till thiruvonam is celebrated with various rituals and traditions. Onapookkalam (floral carpet) is made on all these days.  The traditional way of making Onapookkalam is different from what is done today. . Traditionally, cow dung is smeared where the pookkalam is made. Once it is dried, patterns are scored into it with coconut tree reeds. On the Atham day, there will only be a single ring, the second day which is Chithira there will be two rings and finally on the Thiruonam day there will be 10 rings.

( A large onapookkalam at Kannur , Kerala )

On the first day only a single colour flower is used, second day two colours and on the final day 10 different colours of flower is used. Symbolically the ten rings or steps represent the ten deities in the Hindu pantheon. First step is Ganesha, second is Shiva and Shakti, third is Shiva, fourth is Brahma, fifth is Pancha Boothangal, and sixth is for Shanmughan or Muruga, seventh step is for Guru, and eighth step is for ashta digpalakar, ninth is for Indra and tenth is for Lord Vishnu. 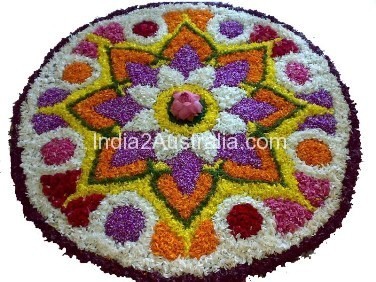 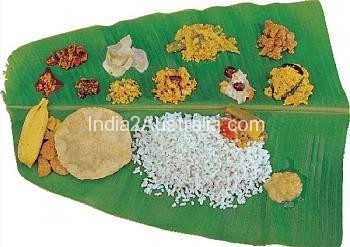 Sadhya is traditionally a vegetarian meal served on a banana leaf, with the narrow end of the banana leaf pointed to your left. People are seated cross-legged on the floor on a mat. The main items in an Onasadhya are Parippu , Sambar  , Rasam , Aviyal , Kaalan , Olan , Koottukari , Kichadi , Pachadi  , Puliyinchi , Thoran, Achaar . This followed by a payasam ,mostly a Pradhaman .  These items are traditionally served at particular places in the Banana Leaf. There is a strict order for serving Onasadhya . On the left bottom portion of the leaf, pappadam is served. Next to it banana is placed. Beside that banana chips and sharkara varatti are placed. On the top left corner, different types of pickles like inji puli, big lime pickle, mango pickle are served. Then comes thoran, olan, avial, pachadi, kitchadi, erissery, kootucurry and salt. On the lower middle portion of the leaf rice is served only after the person who is going to eat is seated. The first course is the parippu curry, ghee and pappadam. Next sambhar followed by pulissery, kalan and then rasam. Next payasam is taken. Ada pradhaman, paal payasam etc. The course is completed with butter milk. This aids in digestion of this large meal.

There is an order for serving Onasadhya and every item need to be served at a certain place in the Banana leaf . Below is an image showing a served banana leaf 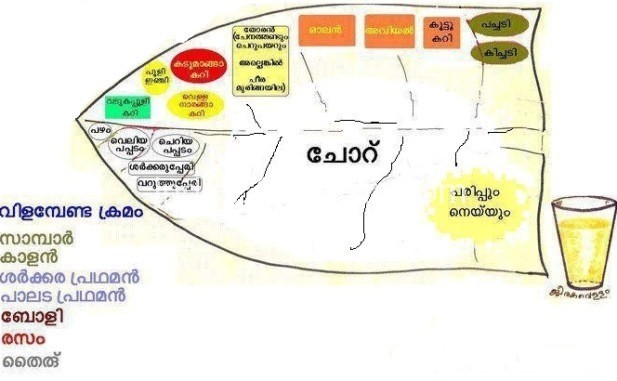 How Onam is celebrated in  Kerala 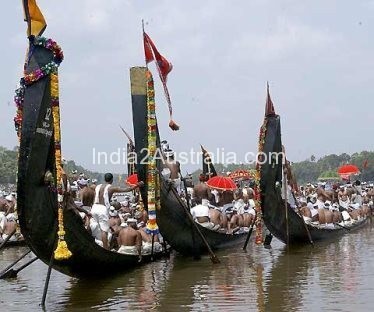 Aranmula snake boat race conducted on Thiruvonam day is another world famous Onam attraction.  Aranmula is a village in Pathanam thitta district in Kerala around 128 Kilometres from the state capital. 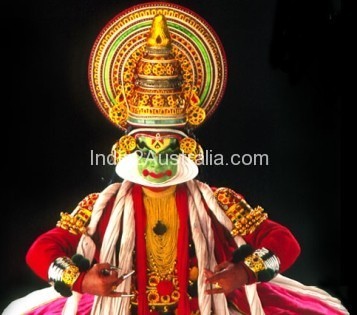 In Some parts of Kerala Kathakali performances are conducted during this festival. 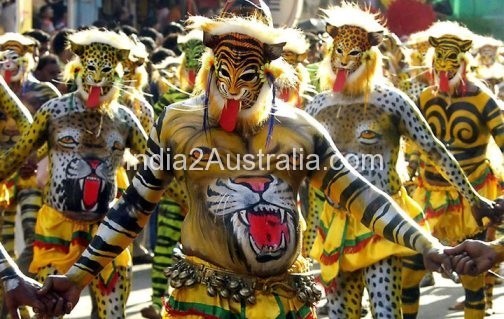 Kaduvakali or pulikkali is a dance performed during Onam.  Dancers dressed as a tigers , with rhythmic body movements are viewed  and  enjoyed by both children and adult alike.

Thiruvathirakkali or kiekottikkali is more or less an Onam dance. Woman dressed in traditional Kerala attire , gold bordered mundum , neryathum , in a group of eight to ten performs this dance clapping in unison. 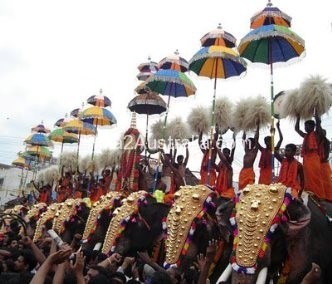 Elephant procession at Trichur in Kerala ,during Onam Celebrations 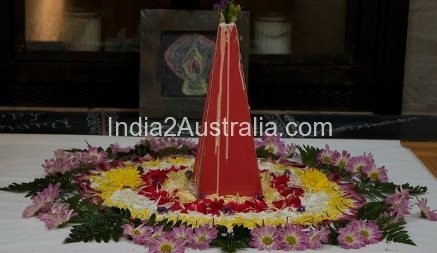 A traditional onapookkalam or flower carpet in Kerala

Video of Tripunithara Athachamayam procession during Onam festival in Kerala