By admin on September 29, 2012Comments Off on Sherrin’s Child labour and Corruption in India 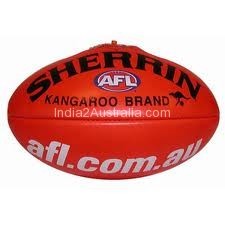 Australian footy ball manufacturer Sherrin was in hot water for the use of under aged workers by one of its subcontractors in India. The company responded immediately by terminating the contract with the Indian manufacturer. In a couple of weeks’ time, the issue of child labour will fade away from public memory preventing any concrete action to address the issue. On the part of the Australian public, raising the issue and the swift remedial actions were appropriate and has come out of compassion. But for the  Indian media, this was not even a news worthy item.
2001 Indian National Census estimates that 13 million Children work in India, which can be classified as child labour. Article 24 of India’s constitution prohibits child labour. Child labour deprives children of their childhood and educational opportunities which denies them an opening for betterment in the future. So it becomes a moral obligation for any sensible person to oppose employing children in a way that interferes with their schooling and other childhood activities.
But there is another side to the coin. What will happen to these children if they are not working? while right and wrong can be segregated easily as black and white in this issue, the wider implications of a legal approach will be conveniently ignored. Will they go hungry, if the income from the work disappears?
Out of a total child population of 223.5 million in 2004–05, 2.9 million children or 1.3 % Were ultra-poor, 66.7 million children or 29.8 % were poor; 124 million children or 55.48% were in the non-poor low category, and 29.9 million children or 13.38 % were in the non-poor High category. Contrary to the wider perception, Indian Government has implemented many schemes for helping children from poor families. As a part of the eleventh Five year Plan (2007–2012), the central government of India outlined an expenditure of 65.6% of its total education budget of INR 438.25 billion (US$8.28 billion) i.e. INR 287.5 billion (US$5.43 billion) on elementary education; 9.9% i.e. INR43.25 billion (US$817.43 million) on secondary education; 2.9% i.e. INR12.5 billion (US$236.25 million) on adult education; 9.5% i.e. INR41.765 billion (US$789.36 million) on higher education; 10.7% i.e. INR47 billion (US$888.3 million) on technical education; and the remaining 1.4% i.e. INR6.235 billion (US$117.84 million) on miscellaneous education schemes.
The Government of India’s budgeted expenses for poverty elimination, Education and industrialisation are much  higher than  countries of same stature.But ground realities paint a different picture . In many instances studies have found that a family’s income from child labour helps the family attend to the basic necessities of life. In the absence of that income the children will go hungry. In all essence, child labour proved to be a necessary evil. In  Sherrin’s case , footballs were being hand-stitched by children as young as 10, for as little as 12 cents a ball. The children, almost all of them girls, were being pulled out of school to stitch balls, for up to 10 hours a day, seven days a week. On the surface it may look sinister, but those children most probably had no other option. If it was not Sherrin, It would be some other cruel Marwari businessman.
The issue is not of punishing a Sherrin , Nike or any other global brand . The issue is of uplifting millions of Indians who live below poverty line. Where are the Billions of dollars spent by the Government disappearing? Who are the actual beneficiaries?
The answer lies with India’s highly corrupt politicians and the bureaucracy   . The money is swallowed by the middle men and never reaches the needy. Neither the anti-corruption legislation nor the people’s movements had any impact on addressing the corruption issue. From Maharashtra irrigation scam to Adhar Scam, billions of dollars were swallowed by these unscrupulous elements.
Without eliminating corruption in India, India will remain poor and unmanageable for centuries to come. India may shine for a few IT professionals and other entrepreneur elite, but the rest will live in the dark ages.
Now the question is, “what should be done to address the corruption issue in India?’. It is nearly impossible to punish the rich and the powerful through the legal process in India. So the only answer is mob justice. Mob justice for the politicians and other powerful brokers within the ruling class . With mob justice emotions may run high and many injustices may be committed.   But the lessons will last for ever. The lessons that may create a corruption free India.

Sherrin’s Child labour and Corruption in India added by admin on September 29, 2012
View all posts by admin →