Significance of moles in your palm

By admin on December 12, 2015Comments Off on Significance of moles in your palm

The debate over Palmistry, whether it is a science or superstition is irrelevant, as it has survived many skeptical views over  thousands of years. Palmistry is best utilised as a tool to predict diseases and unforeseen events in life well in advance. It is unfortunate that those who are convinced about the inherent power of this science fail to use it to their advantage. The main reasons for people to view palmistry with a skeptical eye is the lack of systematic study in this field and too many fraudulent individuals have made a career out of it with the sole intention of filling their pockets.

In this article we are looking into the significance of moles on the palm and how these moles represent weakness of internal organs or changes in natural course of life.

Moles can appear in different colours, sizes and shapes and each has different significance, but only a learned Palmist will be able to distinguish each precisely. This article should be used only as a guidance and if you require to explore more, please consult a learned Palmist with good knowledge in the field. 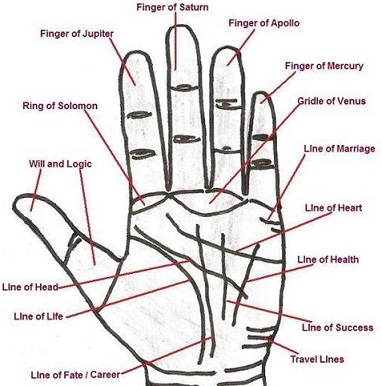 White spot on the nail

Spot or moles on lines in palm

For an accurate reading of spots and moles divide your palm in half vertically with an imaginary line from the middle of your middle finger to the bracelet. Moles found on the middle of the palm on the right hand side of the line are auspicious. It is an indication of happy married life and good relatives. If you have twin moles on the back of the palm almost in the middle, it is an indication of good and rich life.

A black spot on the head line shows accidents and injury to the head. If a round white spot is found, it shows trouble to the eyes.

Mole on mars line shows timid nature of the bearer.

A purple coloured mole on the quadrangle near the heart line shows blood related diseases.

A mole on the health line shows general weakness of health.

A black spot on the marriage line shows marriage failure.

A brown colour mole on heart line shows the bearer a flirt who will fail to find love. A red mole on the same place shows heart trouble.

A black spot on the fate line is an indication of career troubles during the period where the mole is placed. (Fate can be serrated showing age)

A black mole on the fish line at the end of the life line near the bracelet is an indication of troubled married life. 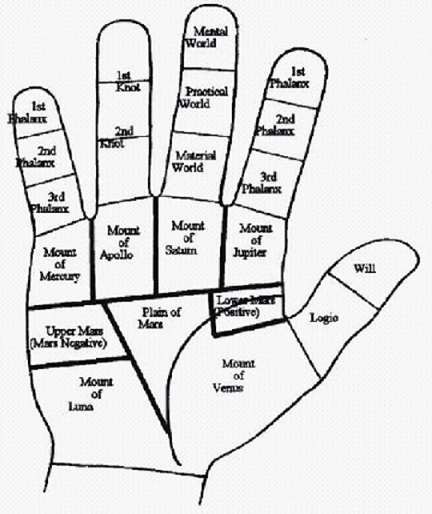 A mole on the top phalange of the right hand thumb makes him/ her very hardworking and financially sound. But on the left hand it is an indication of loss of wealth.

A mole on the second phalange of middle finger indicates someone who is more likely to be injured with weapons.

Mole on the tip of the right index finger makes a person just and successful. On the left hand index finger, it could be an indication of quick temper and the habit of picking fights with others and can give sudden losses.

Those with a mole on first and middle phalange of index finger never stick to anything and goes on changing their mind. If you have a mole on the lowest junction of index finger, you are more likely to be cheated by a family member.

A mole on the tip of right middle finger gives a balanced life and a happy one. On the left it gives hurdles in achieving goals and serious illness.

A mole on the tip of right ring finger is not good. If the mole is dark in colour, it indicates sadness and also an indication of heart problems. If it is reddish in colour it shows that you are a scholar. If the moles are on the left hand it shows success in life.

A mole on the right little finger shows, loss of fortune. If it is in light red colour, it shows you will recover most of it later in your life. On the left hand it shows lucky children.

Significance of Spots on the Mounts

A mole on the mount of Venus in the shape of a flame is an indication of electrical shocks. If a mole is found on the Mount of Venus nearer to the base of the thumb it shows rise in life after the birth of a child.

A mole on the mount of mercury is an indication of bad reputation in business.

A black mole on the sun mount shows failure in family life. If it is on the right palm it shows current and if on the left palm it shows the bad family reputation of your parents.

A black spot on the mount of mercury is an indication of marriage failure.

A mole on the mount of mercury is an indication of the delay in finding a partner which results in delay in marriage.

A mole on the Jupiter mount shows obstacles in marriage. In some cases it shows lack of capability or efficiency in getting things done.

A mole on the right hand bracelet is good and if the three are a chain of moles, it shows tremendous success in life.

Mole on the Saturn mount in most cases shows a womaniser and an indication of resultant troubles in married life.

If there is a black mole between the heart and head line on the left hand on the left side of the imaginary line drawn at the middle of the palm, shows abnormality in mental activity.

Significance of moles in your palm added by admin on December 12, 2015
View all posts by admin →