The Sikh Gurudwara at Craigieburn is an eye catcher because of its size and the distinctive architecture from the surrounding buildings. It was my well cherished wish to visit a Gurudwara and offer my prayers. The Sikh culture and traditions are very much different from that of Hindus. For my generation, Sikhs are not the calm, turban wearing, religious and successful people as perceived today. We lived through Bhindranvala , Operation Blue Star and Khalistan . Indian media’s portrayal of Sikhs as terrorists in the 80’s and 90’s were more than enough to generate a sort of fear and suspicion towards the turban wearing Sikhs.
Moreover I wanted to know a few things about the Sikh religion: like what is their deity, how they pray and how many Gods they have etc. etc. Finally this Saturday I gave my secret fears a holiday and drove straight to the Gurudwara at Craigieburn in Melbourne. 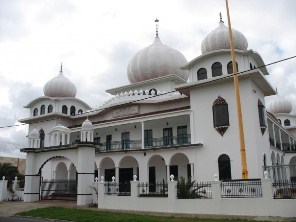 I reached inside the temple complex around 9:00 am in the morning. The front gate was closed but the parking lot was open, allowing me to park inside. I carried my favourite Canon Camera with me to make use of any opportunity to photograph the inside of Gurudwara . I soon realised that, my daring attempt has become futile as the front door was locked and no one answered my knock. As I was reversing my car to go out, I noticed a few cars parked at the back of the complex. Fortunately the back door was open.
I approached a lady with two kids entering inside the temple. To avoid any adverse consequences, I declared that I am not a Sikh and would like to offer my prayers. She assured me that people of any religion are more than welcome to offer their prayers. I was directed to a box where used scarfs are kept. I selected a yellow one and covered my head. Inside the Guru Grand Sahib no one is allowed to enter without covering the head.
The room I entered was large, with kitchen utensils and cleaned plates. The Sikh guy standing at one corner hand gestured me, which roughly could be interpreted as “are you looking for food”. It did not take much time for me to realise my mistake. The prayer hall was on the first floor and all these while, I was wandering through their kitchen. He directed me to the prayer hall. Here are some of the photos I have taken and the information I have collected. 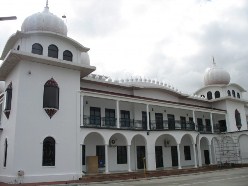 This Gurudwara Sahib is the centre of the local Sikh community, spreading the values of Sikhism and fulfilling the religious needs of the community. People from a radius of around 35Kms come here every Sunday and Wednesday, for the Diwans (Prayers). This Gurudwara Sahib offers some free facilities to the public, such as the Use of kitchen, Van for Sri Guru Granth Sahib Ji, and Rooms for stay.
Gurdwara Sahib has a spacious and well equipped kitchen (Unfortunately I spent most of my time, wandering here. Offcourse a real huge one) which the sangat can use during their weekly programmes. The families who would like to use the kitchen for private functions can contact the management committee prior to use.
Gurdwara Sahib offers the Sikh Sangat rooms for short stay. 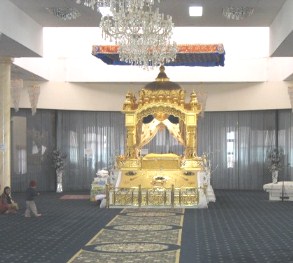 Code of Guidelines for entering the Gurudwara

1. Should not Bring Tobacco into the premises of Gurudwara and inside the prayer hall.
2. Should not be under the influence of alcohol.
3. Should take off your shoes on entry & wash your hands.
4. Cover your head at all times in gurudwara sahib

Guru Granth Sahib compiled by Guru Arjan Dev in 1604  as the first definitive edition of the teachings of Guru Nanak and other Sikh Guru’s is the principal Sikh book of Scriptures. The Guru Granth is the central object of worship in a Gurudwara.  The Guru Granth Sahib is kept within each Gurudwara and brought out for services, to be placed upon a raised and cushioned dais beneath a decorated canopy . Sikhs worshippers bow before the GuruGranth Sahib
Sikhs believe in oneness of God. God is without form being neither male nor female. God is omnipotent, omniscient and omnipresent. He is the supreme spirit, the ultimate spiritual reality. In Sikhism God is termed.’ Vahiguru’ .
There are no priests in a Gurudwara. Temples are usually run elected committees. A class of professional scripture readers, called Granthis , together with musicians (ragis) accompany the hymns .
Upon entering the Gurudwara , Sikhs make an offering and bow to the Guru Granth Sahib, then sits never turning his back on the book. A religious service normally includes singing the hymn, accompanied by music of the ragis and a reading from Adi Granth, while a ritual fan (chaudri) is waved above it. A hokum nama (Divine order) or vak ( a randomly selected hymn) is read first . A Prasad and a communal meal will follow.