By admin on May 16, 2018Comments Off on The 3 Idiots Comedy Night in Sydney, Melbourne, Perth, Brisbane and Adelaide 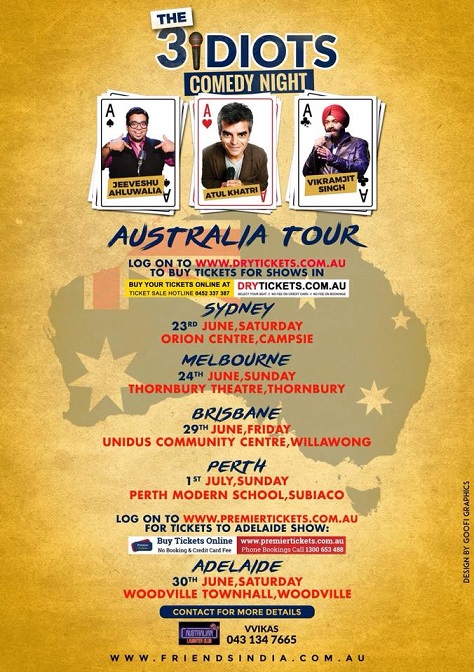 Atul Khatri: Rated by CNN-IBN as one of the best Indian Comedians, Atrul Khatri is the only Indian comedian to perform in the Hong Kong International Comedy Festival. He is also the winner of the “CEO’s Got Talent” award by FremantleMedia. Atul Khatri joined the company East India Comedy which was founded by Sorabh Pant in 2012 and is one of the busiest comedy groups in India. He is also featured in TV advts for Amazon.com, Muthoot Finance, Rebtel, Aegon Religare Insurance, Philips and Matrix SIM card

Jeeveshu Ahluwalia: Jeeveshu is supercool, Fair n Cute PUN-jabi in the comedy world. His comedy career began as an extension to his antics at a mundane desk job. His humour style is derived from observational everyday conversations, quirky monologues, peculiar situations and some eccentric friends.

Vikramjit Singh: Vikramjit Singh is a stand-up comedian and writer. When he’s not disguising his jokes as ‘opinion’, he disguises his opinion as jokes for corporate people and bar-goers alike. The many pressures of urban India are his muse, and useless rhymes like this one blow his fuse.

The 3 Idiots Comedy Night in Sydney, Melbourne, Perth, Brisbane and Adelaide added by admin on May 16, 2018
View all posts by admin →