By admin on January 4, 2018Comments Off on The Great Ocean Road 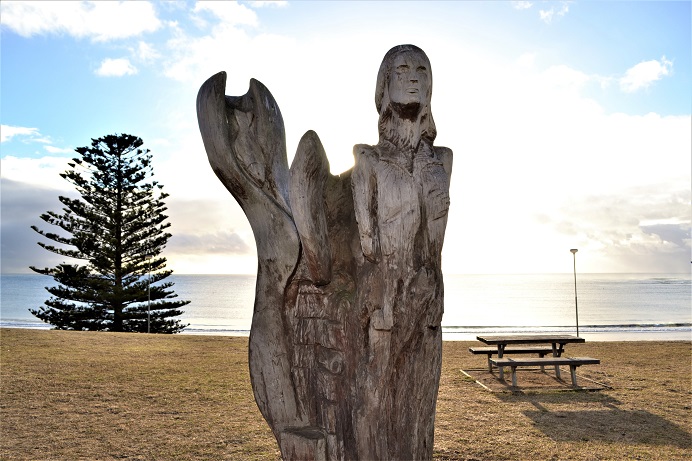 The Great Ocean Road is counted as one of the best coastal drives in Australia. It starts at Torquay and travels 244 kilometres to finish at Allansford near Warrnambool. Squeezing the whole length of the drive for a one-day trip, means to skip the relaxing stroll at the little towns on the way. I took an alternate approach of making a cut off at Port Campbell and reserving the rest of the journey for some other time. Anyway, The Twelve Apostle and Loch Ard Gorge at Port Campbell are the Gems of the Great Ocean Drive – A feast the nature has prepared for us; with the patience of a million years. 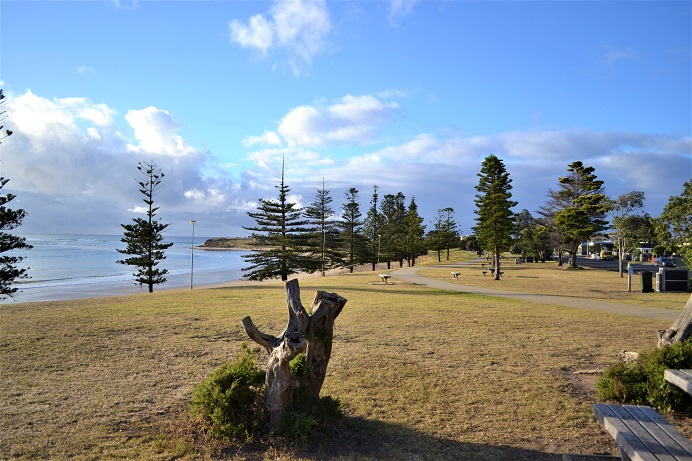 Torquay is a little above hundred kilometers from my home, taking the Hume Hwy means an uninterrupted 100km/h on a cruise controlled drive.  But starting early in the morning at 5’o’ clock was necessary to avoid the office hour traffic. Australia, slowly but surely is making a change from the much celebrated laid back approach to life – the nearly one month long Christmas holidays are becoming a thing of the past.  Though it is only 3rd January most Offices and companies are open for business, which was unthinkable a few decades back. 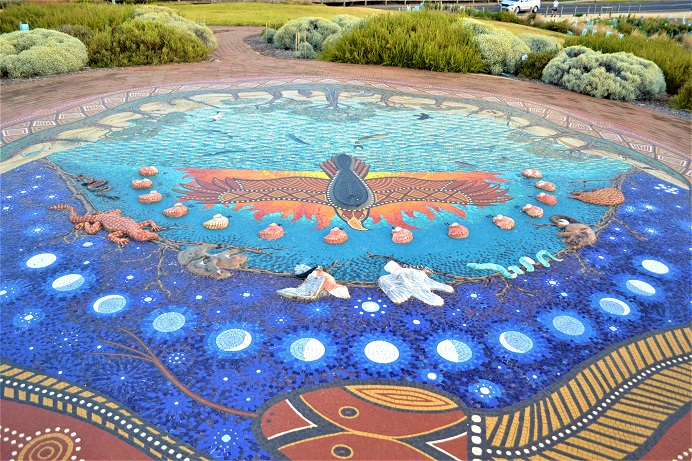 One-hour drive from home took me to Torquay – A little town which depends on tourist revenue. In the past Torquay was also known as Spring Creek and Puebla. One of the early settlers, James Follett, came from Torquay in Devon, England, which was also a sea side town. It was his suggestion that changed its name to Torquay. On the foreshore land at Fisherman’s beach  has an Analemmatic  sundial.   It consists of a central analemma and a number of hour markers. A person standing on the Analemma can tell the time from his or her Shadow. But I did not bother to check the accuracy of the Sundial. A glance around, surprised me with the number of joggers at the foreshore – from age five to those  in their nineties.  Most probably the effect of” New year resolutions” – this phenomenon may repeat only at January next year. 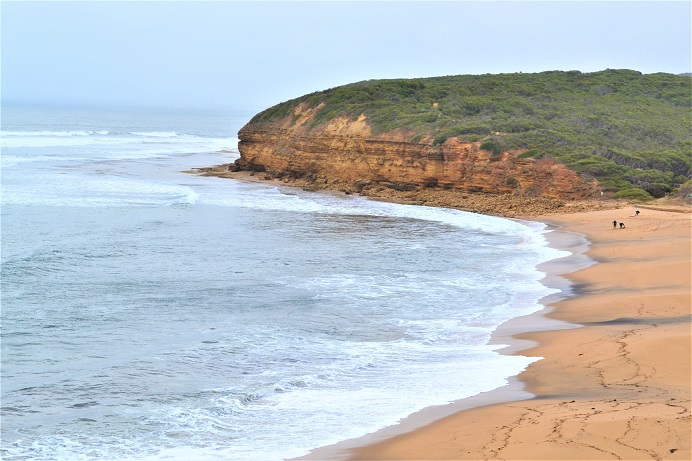 The world famous Bells beach – which is home to world’s longest continuously running surfing competition, is just four kilometers from there. The competition was first held in 1962. When I stepped out, the weather did not look good as it started raining. An early morning rain was the forecast, but I did not expect it to strike at that time, as it can wash away all my plans for the day. But the rain did not deter those with high adrenalin levels, and the beach had so many cars parked with some getting ready with their surf gears.  At least forty surfers were showing their might against the waves; among them could be some of world’s most famous surfing celebrities. 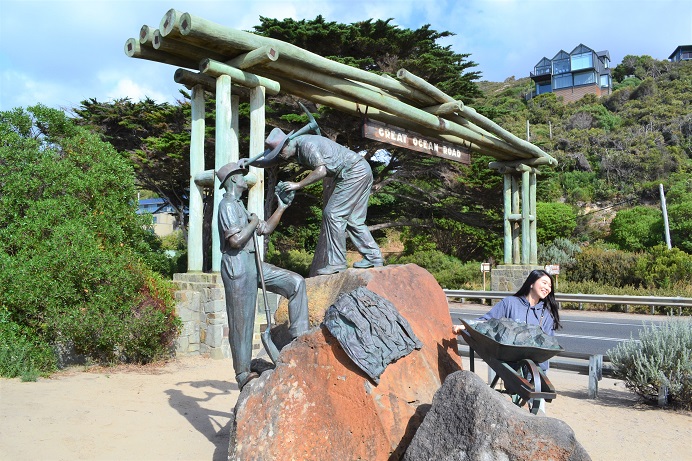 There are provisions for horse riding and also a berry farm nearby but my eyes were set on another place which I wanted desperately to visit. “Bellbrae carriages” – A sort of a museum which displays different types of horse carriages. The address given was Corner of Hendy Main Road and Brush fields Road, around 10km from Bells Beach. But the 10km diversion turned out to be fruitless as I could not locate it at the above said address. 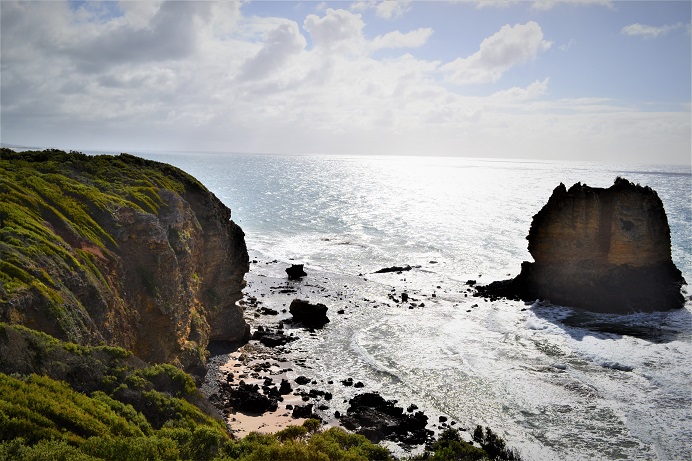 It was time for me to enter the scenic Great Ocean drive set at the midst of Otway National Park. The park features rugged coastlines, sandy beaches, pristine rainforests and misty waterfalls, which makes the drive, one of world’s most scenic coastal drives. The road was planned as a war memorial providing employment to soldiers returned after World War 1. Before the road was built, the coastal towns in the area were accessible only by sea or bush track. The survey for the road began in 1918 and the construction on 19 September 1919, with nearly 3000 returned soldiers involved in the project. It was a perilous task to build a road through the dense wilderness and many lives were lost.  There is a memorial for Howard Hitchcock, the man behind the Great road at Mount Defiance, near Lorne. But the soldiers who fought a war for the country and then lost their lives building the road, are forgotten. The road began its life as a Toll Road but soon made free to travel. As I drove enjoying the beautiful sea on one side and the forests on the other,  I silently paid homage to the thousands who endured the struggle and hardship behind it. Nothing good ever materialized without the vision and hard work of people willing to sacrifice their life for a cause. 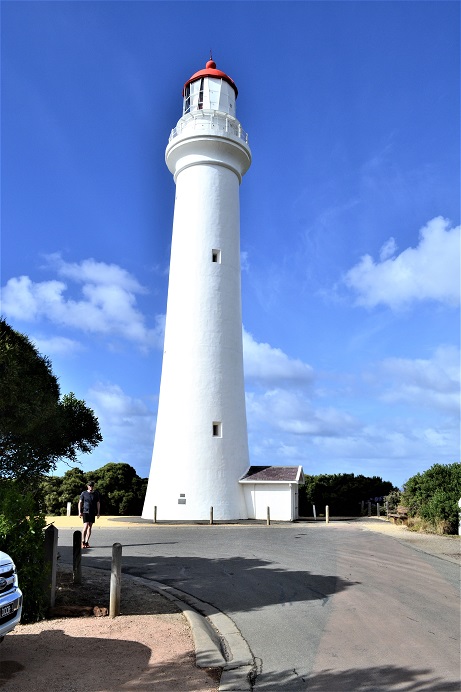 My next stop was Anglesea. A small town with nothing much to boast about. A couple of look out points at Great Ocean drive, like Point Road Knight and Point Addis gave a snap shot of what is ahead. 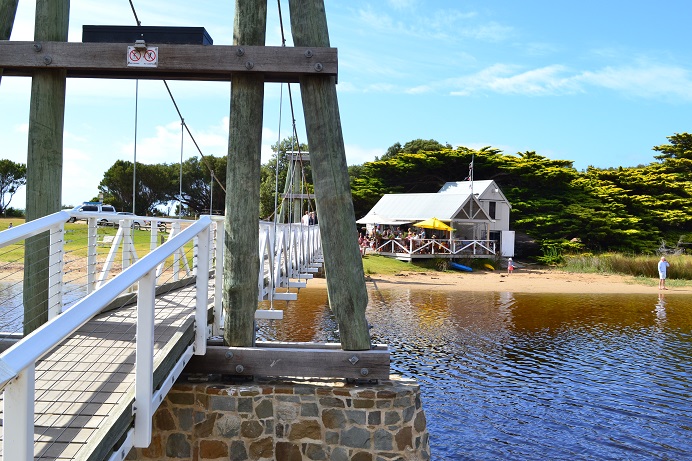 Just 10km away from Anglesea, lies Aireys Inlet. With Fairhaven beach closer by, tourists make a stop here. Aireys Inlet was named after John Airey, a Navy Officer turned Politician, who settled in the area in 1842. But the main attraction here is the 34m tall Split Point Lighthouse, which was constructed in 1891. Visitors can climb the light house at designed times every day. Anderson and Sons, a Melbourne Company built the lighthouse from concrete rubble on a clay foundation. The original Kerosene light was converted to automated operation using Acetylene gas in 1919. The light is visible on a clear day upto 33km on the sea.  Locals fondly call the lighthouse the “White Queen”. 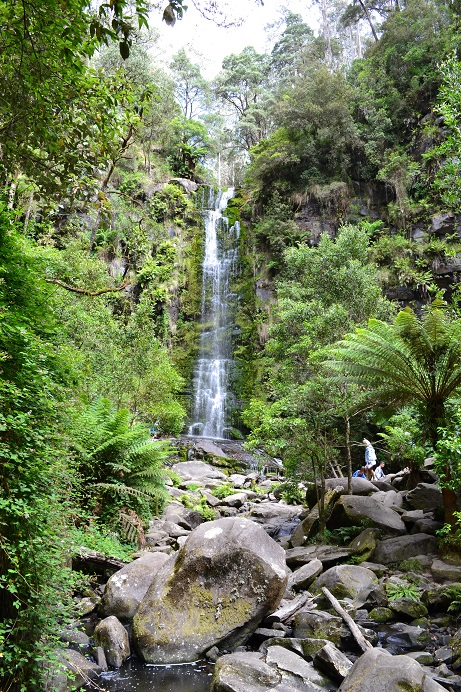 But the real Queen of the Great Ocean road was yet to come. With its waterfalls, white beaches, café culture and beautiful scenery, Lorne is the Queen of the coast. With around ten waterfalls around the town, I shortlisted Erskine falls as the one to visit which is nearly ten kilometres away from Lorne.  It falls around 30m from above. There are two viewpoints – one at the top and the other, at the base of the fall. There are steps to take the visitors down. With no distinction, both the young and the old, were struggling to climb up the steps to return from the base. I don’t recommend, the old, and the weak, to go to the base of the falls as climbing up  left me nearly exhausted. 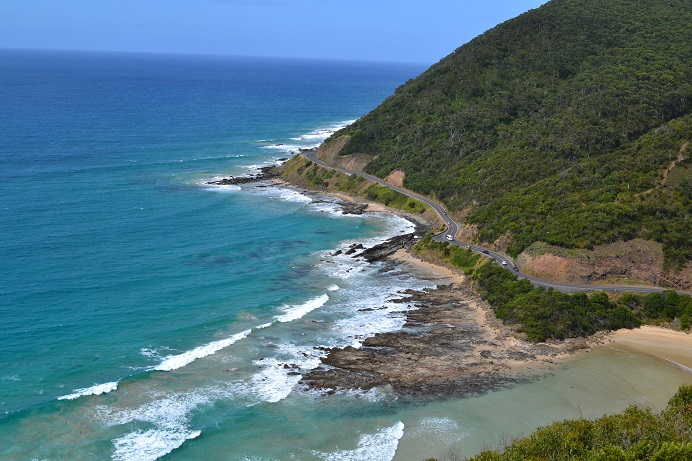 A short diversion on the way, takes us to the scenic spot known as Teddys lookout. This is one of the best lookout points, to have a breathtaking view of the surf breaking into the mouth of the Saint George River and the narrow lanes of the Great Ocean road. 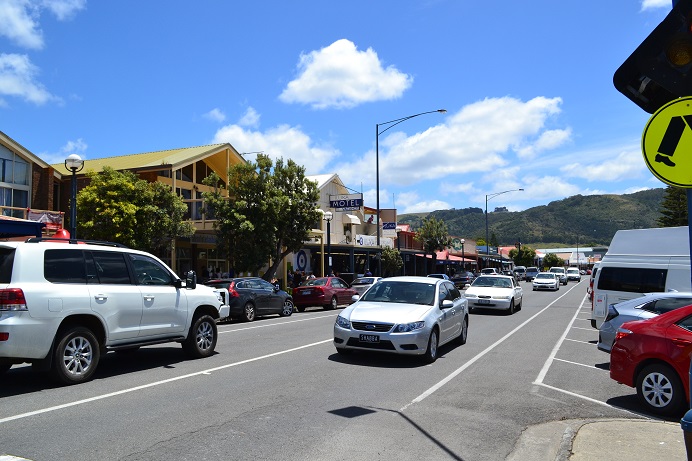 From Lorne to Apollo Bay is around 47 km and this is the best stretch of Great Ocean Road, in terms of spectacular views, where rain forest meets the ocean and the beautiful beaches along the way. 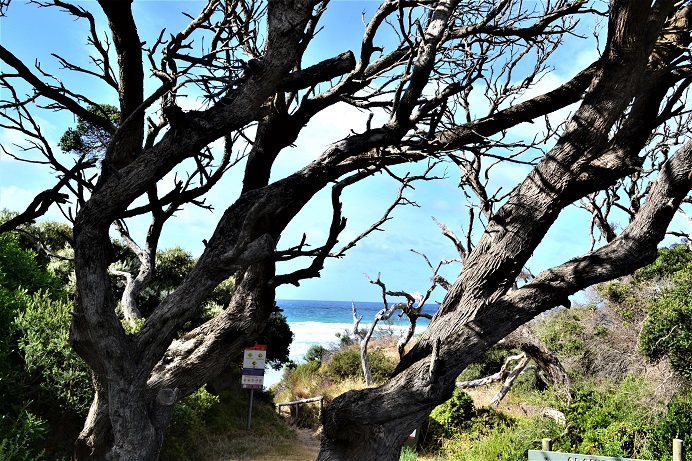 Apollo bay is a smaller yet vibrant township. To save time I did not step into any of the beaches around. But made it sure that I will get a fish and chip takeaway from Apollo Bay. Soon I spotted a Chinese fish and chip shop at the shopping strip. The shopping strip was full of people and the cafes around were fully packed.  With so many people queued up inside the Fish and Chip shop, it took a while to get my pack of flake, scallops , prawn and large chips. But the wait was worth it and fortunately it was not of Chinese quality. With a full stomach, the blue sky looked lovely with no white clouds and the rain has cleared declaring the arrival of a fine day ahead.  Next on the agenda was Mariners falls- but skipped that and went straight to Barham Paradise scenic Reserve.  The pinch of disappointment the place offered resulted in a U turn, and it was time to head to the final destination – Port Campbell. 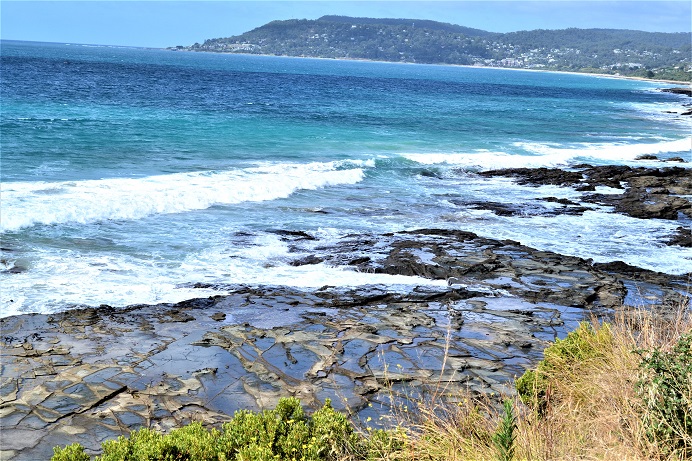 The beauty of the beaches

Apollo Bay to Port Campbell is nearly 100km, a stretch that will take around one and a half hours to cover. The speed limit on the road ranges from 50 to 100 with many bends and turns, with only a few spots on the road availed to overtake with two lanes. A ‘P’ plater ahead, moving slightly more than 50km/h all through, made the journey a real drag and it took around 2.5 h to cover the distance. This being the Christmas holiday season, there was a huge crowd at the 12 Apostles, made worse by the road works along the way. Another separate parking spot near the helipad was set up. It was nearly 2km walk to Gibson steps and 1.5km walk to 12 Apostles from the Parking spot. 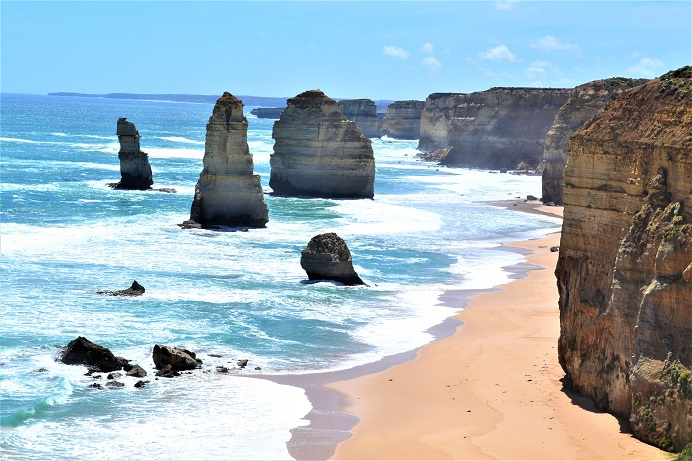 The Twelve Apostles is a collection of limestone stacks formed by erosion. As the erosion continues, the stacks finally collapses and disappears. Though they are called 12 Apostles, now only 8 stacks remain. These magnificent rugged stacks are Victoria’s most famous tourist attraction. Watching the might of the sea and the aloofness of those monolithic structures could be overpowering, for those with an imaginative spell. This is nature at its creative best.

Last time when I visited, I made a big blunder by not going to Loch Ard Gorge which is just 4km away from 12 Apostles. Loch Ard George offers a much more magnificent view of the structures compared to what we can see from the 12 Apostles viewing area.  Even if you skip 12 Apostles, make sure you visit Loch Ard Gorge. 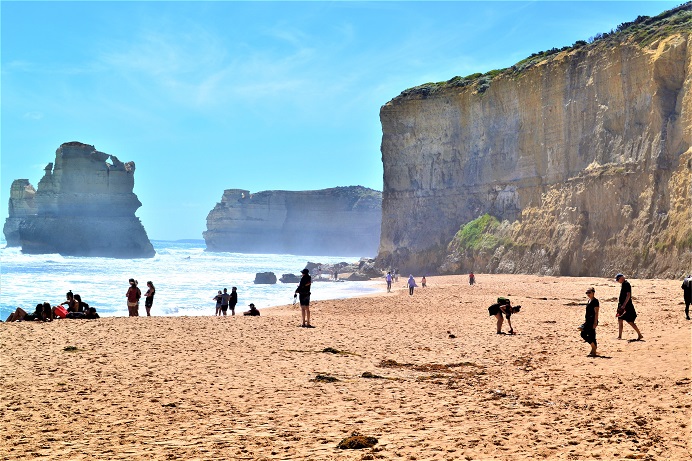 The name Loch Ard Gorge may seem a bit strange for an Asian Visitor but there is a tragic story behind the name. Loch Ard was a clipper ship which ran aground on nearby Muttonbird Island in 1878 after a three-month journey from England to Melbourne. Out of the 54 passengers and crew only two survived. Two 19-year-old teenagers, Tom Pearce, ship’s apprentice and Eva Carmichael – an Irish girl emigrating with her family to Australia. Pearce washed ashore, rescues Carmichael after hearing her cries for help. Unlike a Bollywood movie, this was no love story.  After losing 4 of her family members to sea, Carmichael returned to Ireland after 3 months. But as long as Loch Ard Gorge remains, Tom Pearce and Eva Carmichael will live on along the stories the sea breeze brings for visitors like me. 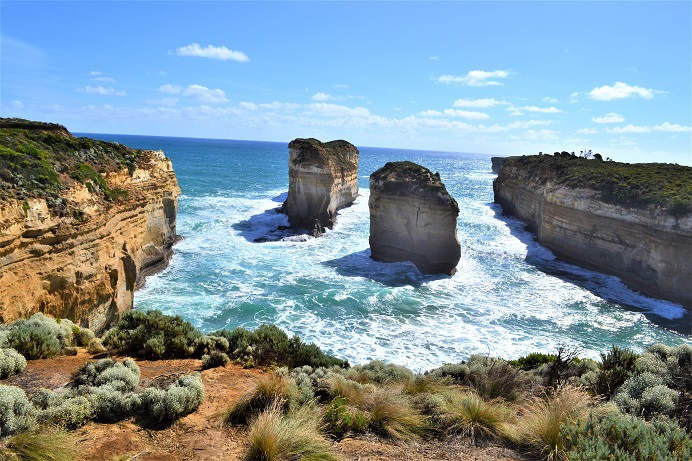 It is six ‘0’ clock and my Marvellous Melbourne is 261 km away – a three-hour journey through the mostly 100km zone. I will opt for the Freeway all through instead of the Great Ocean Road to return to my nest. During summer, it gets dark only by 9’0’ clock and by choice I never prefer to drive at night. Perfect time to make a return.  But I will be back within six months to continue the rest of the Great Ocean Drive and further upto Port Fairy. 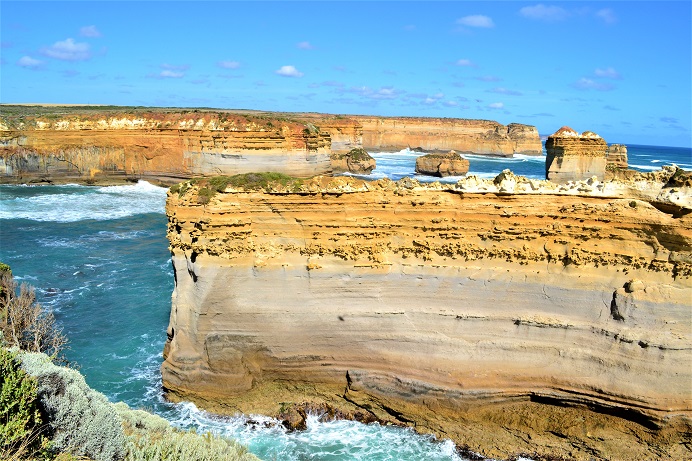 The Great Ocean Road added by admin on January 4, 2018
View all posts by admin →

Bollywood Music and Dance Festival and Bridal Show
Werribee Open Range Zoo
Minoti Apate , NSW Woman of the year 2015
Music of A.R.Rahman in Melbourne
From Pakistan with Love
Ganesh Festival 2017 in Adelaide
THE RHYTHM OF BOLLYWOOD 2016 in Sydney