The true story of Bajirao and Mastani

By admin on November 23, 2015Comments Off on The true story of Bajirao and Mastani

The story of Bajirao and Mastani caught public attention after the release of the Bollywood movie Bajiro Mastani. In the absence of concise historic records, the story is infact a borrowed plot from the local folklore.

Bajirao (born 18 August 1699 – died 28 April 1740) served as a Prime Minister and General to the Maratha Chhatrapati Shahuji Raje Bhosale.. Bajirao is considered as the most valiant of Peshwas. Mastani was bajirao’s second wife. There are no court records of Mastani, so the stories about her are mostly from local folklore. One distinct disadvantage of depending on folklore is , usually there will be many versions of one story and most of the time they contradict each other. 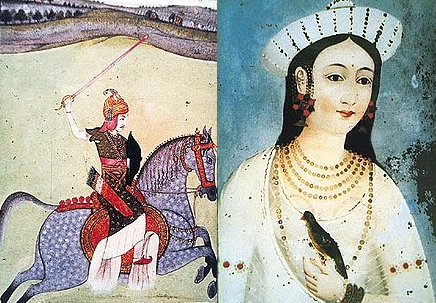 Paintings believed to be of Bajirao and Mastani

Mastani was the daughter of Bundela Rajput leader, Maharaja Chhatrasal (1649 -1731) , the founder of Panna State in Bundelkhand province. Chhatrasal was a very brave warrior, who revolted against the Mughals in Bundelkhand from the age of 22. During his revolt against the Mugals he conquered large tracts of land, but what made him  prosperous as a king was the diamond mines in his Kingdom at Panna. Mastani was his daughter born to his Persian Muslim wife Ruhaani Bai.

Chhatrasal had engaged his whole life fighting against the Mugals , though he succeeded to a large extend, at times he suffered set backs. In 1727, Mugal General Mohammad Khan Bangash had laid a siege in Bundelkhand and Chaatrasal  appealed for the help of Marathas, but Marathas could reach out in time. Chattrasal was wounded in the war and was captured by Muhammed Khan’s army. As a last resort Chhatrasal sent a secret message seeking Bajirao’s help as he was undertaking some military operations in the nearby area. Bajirao came to Chattrasal’s rescue. Bajirao’s army surrounded Mugal army at Jaitpur forcing them to concede defeat. Muhammed Bangash pleaded Bajirao for a free passage to Delhi and Bajirao granted his plea on one condition of making a pledge of not troubling Chattrasal  in future.

In return, Chattrasal married his daughter Mastani to Bajirao. There is one more version to the story that Mastani was a dancer in Chhatrasal’s court and Bajirao fell in love with Mastani and married her. But it is unlikely to be the correct version, considering other matters. Historians say that Bajirao and Chattrasal had maintained a father – son type of relationship.

Mastani was skilful in martial arts and was a talented dancer herself. Bajirao’s marriage to a Muslim woman did not go well with his own family as well as the upper cast Brahmins. Bajirao was married to Kashibai, and had two sons together; Nanasaheb and Raghunathrao. Nanasaheb was later appointed Peshwa by Shahu in 1740.

Bajirao’s mother Radhabhai was enraged to hear her son marrying a Muslim, and she along with her other son Chmnaji Appa tried to persuade Bajirao to send Mastani to exile. Mastani bore a child who was named Krishnarao. But the local Brahmins refused to accept the boy as pure Hindu as the mother is a Muslim. Bajirao wanted to bring him up as a Brahmin, but the local Brahmins refused to conduct his sacred thread wearing ceremony. So Krishnarao was renamed Shamsher Bahadur. Shamsher was killed in the battle of Panipat in 1761 at the age of 27. Shamsher Bahadur’s son, Ali Bahadur later ruled over Bajirao’s lands in Bundelkhand.

Mastani lived with Bajirao at his palace in Shaniwar Wada in Pune. Because of the indifference from his family towards Mastani, Bajirao later built a separate residence for Mastani at Kothud. Bajirao died suddenly in 1740 at the age of 39, believed to be of heat stroke. Mastani died at Pabal Village in Pune soon after that. Some say Mastani committed suicide, hearing Bajirao’s death. But others maintain that she jumped into Bajirao’s funeral pyre and committed Sati. Mastani’s grave is in Pabal. Kashibai also committed Sati but some records say the contrary.

The true story of Bajirao and Mastani added by admin on November 23, 2015
View all posts by admin →

0 Responses to "The true story of Bajirao and Mastani"