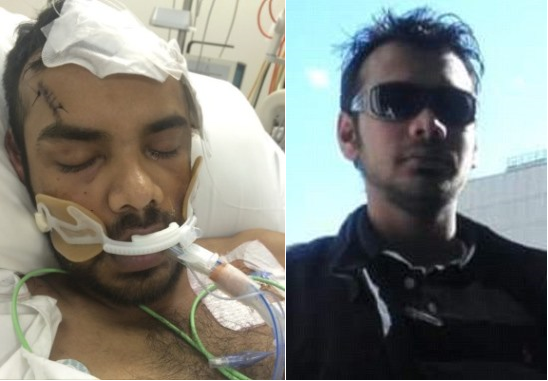 NSW Police has released CCTV footage of a man in red shorts and seek the help of the public to identify the man to solve the mystery of Indian man Vineshwar Pal’s assault case three weeks ago.

29 year old Vineshwar Patel is in a critical condition and has not regained consciousness after being involved in a fight on 4th November 2015. Early morning at 5am on that day, Police were called to Brown Street in Parramatta following reports of a fight. Vineshwar is under treatment at the Westmead Hospital.

Police assume that Vineshwar was assaulted by a group of people on that day, but could not make any headway as they could not find anyone with injuries at the location.

The now released footage from 4pm on 4th November shows a man who may be able to assist with their inquiries into the assault case,

Strike Force Ramox investigators released CCTV footage on Thursday of a man who may be able to assist with their inquiries into the serious assault.

Anyone with information about the identity of the man or other information that may assist with the investigation is urged to come forward.

Police have released CCTV footage of a man they believe may be able to assist with inquiries into the serious assault of a man at Parramatta earlier this month.

Officers were first called to Brown Street just before 5am on Wednesday 4 November 2015, following reports of a fight.

Police attended and spoke with people at a number of nearby properties; but did not find anyone injured.

About 8.20am, officers were called to a nearby location, after a man was found unconscious in the front yard of a property.

The injured man, 29-year-old Vineshwar Pal, was taken to Westmead Hospital in a critical condition.

He remains in hospital and has not regained consciousness.

Police have formed Strike Force Ramox to investigate the matter.

Officers believe Mr Pal was assaulted by a group of people and are looking to identify all involved in the incident.

Today (Thursday 26 November 2015), police released CCTV footage of a man they believe may be able to assist with inquiries.

Anyone with information about the identity of the man, or anyone with other information that may assist with the investigation is urged to come forward.

Police are urging anyone with information in relation to this incident to call Crime Stoppers on 1800 333 000 or use the Crime Stoppers online reporting page: https://nsw.crimestoppers.com.au/ Information you provide will be treated in the strictest of confidence. We remind people they should not report crime information via our Facebook and Twitter pages.