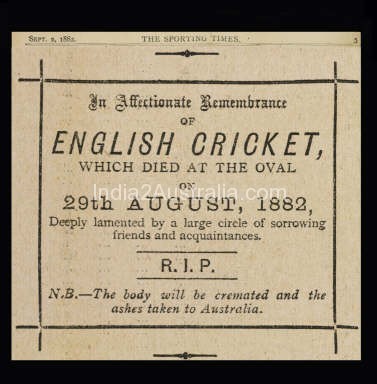 The Ashes test cricket series is played between England and Australia since 1882. The series got its name based on the satirical obituary published ‘ The Sporting Times’ a British Newspaper in 1882 after a match at the historic Kennington Oval in which Australia beat England on an English Ground for the first time.    The first Test match between England and Australia was played in 1877, though the Ashes legend started later, after the ninth Test, played in 1882.
The Newspaper report went on like this.
‘In affectionate remembrance of English Cricket, which died at the Oval on 29th August 1882. Deeply lamented by a large circle of sorrowing friends.  R.I.P N.B. The body will be cremated and the ashes taken to Australia.
The Sporting Times, 1882 on England’s defeat at home to Australia
During the match, William Lloyd Murdoch’s Australian side was doing really bad, reaching a total of only 63 in the first innings. The genius of Fred Spofforth saved the day for Australia as he took 14 wickets for 90 runs. This has inspired the obituary report by ‘The Sporting Times’ .
The Captain of England’s next tour to Australia Ivo Bligh, jokingly referred to the ‘Ashes’ while in Adelaide. Bligh promised that on the tour to Australia in 1882–83, which he was to captain, he would regain “the ashes”. He spoke of them several times over the course of the tour, and the Australian media quickly caught on. While in Melbourne, Ivo was presented with a little urn, by a group of ladies, which is thought to contain the ashes of Cricket equipment, probably a bail, ball or stump.
The matter did not end there, as Ivo had taken fancy to one of the ladies in the group, Florence Murphy, whom he proposed and later married.
‘The Melbourne Punch printed a poem to them both which was about the Ashes.
When Pelham Warner took a team to Australia in 1903, with the promise that he would regain “the ashes”. As had been the case on Bligh’s tour 20 years before, the Australian media latched fervently onto the term, and, this time it stuck. Having fulfilled his promise, Warner published a book entitled How We Recovered the Ashes
The Urn presented to Bligh remains in the Marylebone Cricket Club Museum at Lord’s since being presented to the MCC by Bligh’s widow upon his death. Replicas of the urn are often held aloft by victorious teams as a symbol of their victory in Ashes series