By admin on November 6, 2012Comments Off on Aboriginal art 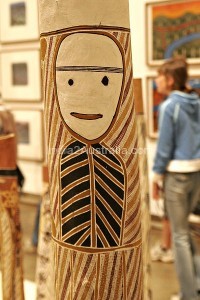 Aborigines believed to be migrated to Australia from Africa 40000 years ago, but some put that figure at 125000 years. There is a great diversity among the aboriginal community in Australia. They live in clans or groups of related families, and lead a semi-nomadic existence. At the start of European settlement there were around 300 Aboriginal languages with around 600 dialects. This diversity in aboriginal culture is evident in aboriginal art too. The artistic tradition of aboriginal people dates back to thousands of years. Aboriginal art included rock paintings, sand painting and bark paintings.
The importance aboriginals give to the land, they live and survive, are evident as it features in most rock engravings. The land is sacred to the aboriginals. The land is where their ancestors lived and contains their heritage, culture, history and their spirit. Aboriginals believe that the land owns them and not that they own the land. The creativity in aboriginal art forms is abstract in nature, so other than serving the purpose as decorative items; aboriginal paintings have deeper meanings associated with aboriginal myths and beliefs.
Aboriginals believe that supernatural forces inhibited the earth before the creation of human beings. These supernatural creatures created all the features of the landscape and animals by taking their shape . All natural formations and living creatures on earth are created during the dream time. The part of dream time’s uniqueness is its connection to land. Aboriginal artists choose their subjects from their own clan’s myths and paint only those myths associated with their clan. The central concept to aboriginal belief system is dreaming or dream time. Dreaming is an approximate translation of the aboriginal concept. The distinctive clans use different words to define dream time. The Pitjantjatjara people use the term Tjukurpa, the Arrernte refer to it as Aldjerinya and the Adnyamathanha use the word Nguthuna. Art is used as a means to open communication channels with dreaming. When people take on the characteristics of dreaming ancestors through dance, song and art the spirit of the ancestors are relived.

Aboriginal people from the desert have a tradition of body painting, making elaborate ground sculptures and painting on objects like boomerangs. The artists creating ground paintings are matured men, with extensive knowledge in the culture and myth of the land and the clan they represent .No one man can create a ground design. In the complexity of Aboriginal social situation, each site that is still ‘living’ has at least two men who stand in a ‘keeper-owner’ relationship to it and two men called Kutungulu (‘inspectors’ or ‘policemen’) who ensure that their keeper-owners maintain correct protocol. Similarly, unless given formal dispensation, men can create only those paintings over which they are recognised as having authority: there is no concept of total artistic freedom in the Western sense (Courtesy: http://aboriginalart.com.au)
Rock engraving which has a history of around 40000 years is still practised by aboriginals. Arnhem land and its surrounding areas are famous for bark painting. To make bark paintings large sections of bark from Eucalyptus trees are peeled and dried . Once the textured outer layer is removed the smooth interior layer is used as the canvas. Traditionally red, yellow, black and white paints are used for bark painting. Like all other forms of paintings subject is chosen from land and mythology of the clan. Until recently aboriginal language did not have a written language. Paintings were used as recording legends and myths of aboriginal culture to be passed through generations. So the significance of aboriginal paintings is much more than an average viewer can contemplate. Australian animals are also a main feature of aboriginal paintings. Aboriginals paint animals in the context of their activities during the dreaming time. It could be a hard task for an outsider to understand the meanings of aboriginal paintings as our views are more fixed and based on a much narrower frame work.

Geoff bardon , an school teacher in Papunya settlement, which was built to relocate aboriginals became the driving force in the development of contemporary aboriginal art. Canvasses and acrylic paintings were introduced and the art form which flourished on barks, rocks and the ground made its foray into canvas. Contemporary paintings have become a way of livelihood for aboriginal artists. These painting have made great impression and found its place in museums and galleries around the world. Paintings made with a series of dots are a prevalent technique of aboriginal artists. Some paintings are made entirely of dots while in others lines and arcs are used. Most of these paintings are an abstract version of aboriginal myths and need to be interpreted for an average viewer to get a deep understanding.

Aboriginal art added by admin on November 6, 2012
View all posts by admin →