By admin on July 22, 2017Comments Off on Alka Yagnik Live Concert in Sydney, Melbourne, Brisbane and Perth

Alka Yagnik is touring Australia in September and October 2017 with Shravan Rathod of Nadeem Shravan duo. This live music concert is planned for Melbourne, Brisbane, Sydney and Perth.

The dates are as follows. 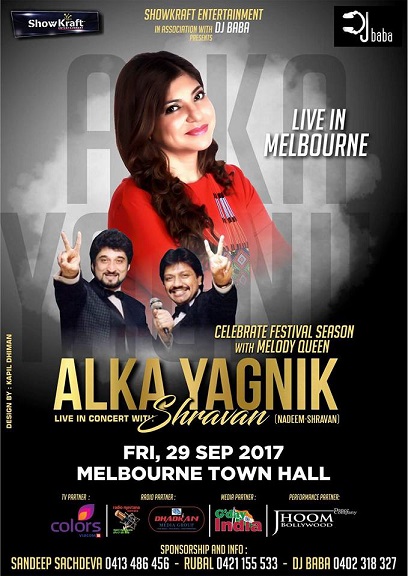 This program is during the Grand Final Long weekend 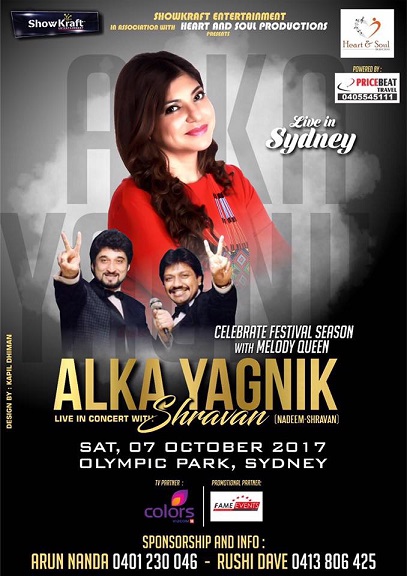 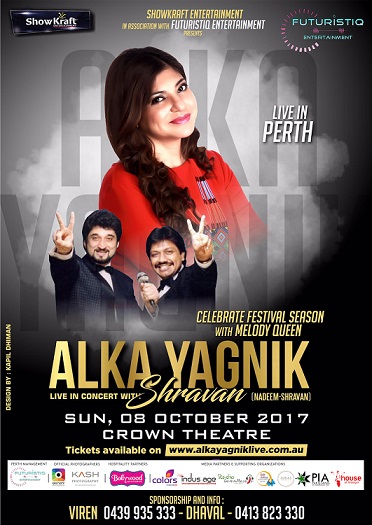 For any further information regarding the concert or to be a part of it, please contact :
Dhaval Patani: 0413 823 330
Viren Pabari: 0439 935 333
The concert is set to be hosted at Crown Theatre, Burswood, WA. With its impressive two-tiered auditorium and seating for up to 2,300 people, Crown Theatre is the perfect venue for major theatrical productions and world-class performers in Perth. Drinks (alcoholic and non-alcoholic) will be available for sale at the venue.
E: info@futuristiqentertainment.com
★ Official Event Organizer: Showkraft Entertainment / Sandeep Sachdeva
★ Register to Futuristiq Updates: www.futuristiqentertainment.com
★ Like our Facebook Page: www.facebook.com/FuturistiqEnt
★ Past Futuristiq Events: http://www.facebook.com/pages/Futuristiq-Entertainment/153169498034099?sk=photos

This program is during the Queen’s Birthday Long Weekend

Alka Yagnik is an Indian playback singer with a career spanning nearly three decades. She is a two time receipient of National Film Award for best Singer and 7-time winner of Filmfare awards. She started her singing career at the age of 6 , singing bhajan for the All India Radio. She has sung 2,486 Hindi songs in 1,114 films

Shravan Rathod is the Shravan of Nadeem – Shravan music director duo. They were the most successful music directors of Bollywood in the 1990’s. Aashiqui (1990) was their first major success in the Bollywood.  In 2005 the duo split and Dosti was their last music compilation. Though Nadeem came back to music direction as a solo director Shravan put his efforts on the music careers of his children.

Alka Yagnik Live Concert in Sydney, Melbourne, Brisbane and Perth added by admin on July 22, 2017
View all posts by admin →