By admin on September 30, 2017Comments Off on Bendigo

On the grand final eve of 29th September 2017, a public holiday in Melbourne, the Melbourne CBD was buzzling with activities –a large crowd gathering in the city to watch the Grand final parade. I was heading on the opposite side of the city on an aimless journey. By the time the car reached the Calder freeway, I made up my mind. I decided not to take any turns and go straight to see where it takes me. 130km later, without turns and twists, finally I reached a town. A town, where if we close our eyes and stay still, we can hear the footsteps and whispers of a generation’s hopes, aspirations and struggles. A town that attracted only those people with need, greed or an attitude of thrill seeking. Between 1850 – 1900, this was considered as the richest city in the world. I must say – no prize for guessing and most probably you got it right –It is Bendigo.

The city got this unusual name for an unusual reason. Bendigo was a corruption of Abednego , the popular name for William Thompson, a prize fighter in Victorian-era England. A shepherd on the Ravenswood run near Bendigo was handy with his fists and became renowned as a good fighter who uses the Bedigo style of fighting. He lived in his hut on a creek which flowed through the valley where gold was found. The stream that ran from Big Hill towards Murray river, soon got the name Bendigo Creek.  The diggings here also became known as Bendigo, and were registered as such on the licences when the proper Commissioner arrived there. But when the place was named in 1852, it was first given the name, Castleton. One month later it was renamed as Sandhurst. In 1891 it was renamed again to Bendigo. 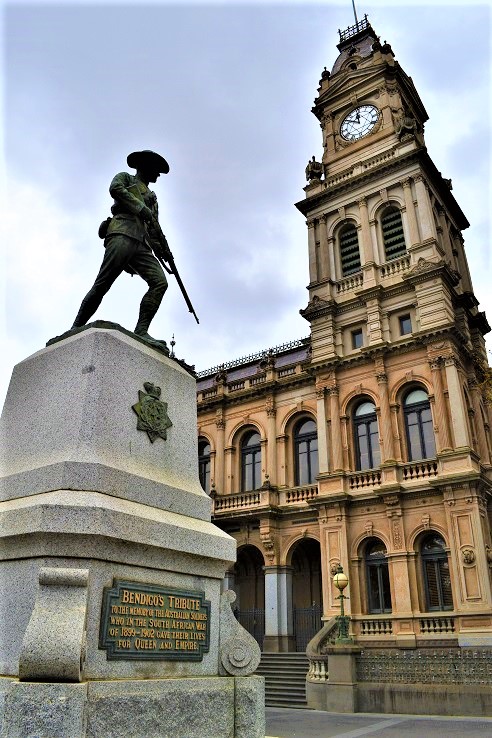 Deborah Mine had a short working history of 15 years between 1939 to 1954, much after the Gold rush of 1852. Now this mine provides a peak back to the visitors. Visitors are taken 61metres underground to explore the mining process.

Golden dragon museum on the other hand displays the Chinese history of Bendigo. Chinese diggers were very much active in the area during the time of Gold rush. Apart from the history of Bendigo Chinese, the museum also displays stunning imperial era artefacts. The classical Chinese gardens and Guan Yin temple sit beside the museum.

Bendigo pottery is Australia’s oldest working pottery, which was established in 1858. This features a collection of heritage listed wood fired kilns. The pottery production process is also in display here.

The Chinese Joss temple was constructed in the 1870’s. The temple a part of Chinese worship was a part of the Ironbark Chinese camp.

Bendigo trams are the oldest running tram network in Australia. The tram museum houses around 45 vintage tram fleet. You can drive the rails of Australia’s oldest vintage tram feet, which is in operation since 1890.

During this time of the year the town holds an annual Tulip display. The display is presented throughout the centre of Bendigo and features more than 36000 tulips in an assortment of colours.

This is one of the towns, where you will acknowledge at the end of the trip that there is a lot more to feel than see. Though getting modernised, it still holds the charm of country Victoria that still stuck in the gold rush days. Most likely, you would want it to be like this forever.

How to reach Bendigo

From Melbourne Airport it is around 1.5 hours’ drive through Calder Freeway. Bendigo is nearly 150km from Melbourne. The freeway has a speed limit of 110km for most of its length.

Catch a train to Bendigo from Melbourne’s Southern Cross station. It is a 90minutes trip. Train time tables can be found here. www.vline.com.au

Bendigo added by admin on September 30, 2017
View all posts by admin →