By admin on October 21, 2014Comments Off on Bharatanatyam

Bharatnatyam is a Natya Yoga or Yoga in the form of art. It is considered to be the oldest type of classical dance which combines Philosophy, Culture, Literature and Music. It is originated in Tamil Nadu. The word ‘Bharata’ is the root word out of which Bharatnatyam is originated. ‘Bha’ stands for bhava or expression, ‘Ra’ stands for raga or melody and ‘Ta’ stands for  tala or rhythm. ‘Natya’, means dance. Bharatnatyam style is more than 2000 years old, but most astonishingly, the essence of the dance remains same as before. The present day Bharatanatyam had been standardized systematically by four brothers who are known widely as ‘Thanjavoor Brothers.’ They are Chinnayya, Ponnayya, Vatively and Sivanandam.

Bharat Natyam is a brisk dance where the body weight is placed on the center of the body. Striking the floor with feet is very important here. The dance is performed in sequences like: Alarippu, Jathiswaram, Sabdam,  Varnam, Padam and Thillana . The dance lasts for 2-3 hours and ends with chanting mangala slokam. The dancers use costume made of Banaras and Kanchipuram silk.

The dancer puts on a lot of shinning ornaments on neck, hands, ears and head. The adornments are studded with stones and wore on neck, ears, hands, and head. A garland of jasmine is worn around the bun, and a trinklet is fitted with tiny bells is worn around in the feet.

The Carnatic classical music is the base of Bharatanatyam composition. The musical instruments that are used in the recital are Flute, Veena, Violin, and Mridangam. The direction of the dance is given by the ‘Nattuvanar’ who gives Thaalam with his symbol of hands and sing ‘Vaaythari’. The two singers sing the songs for the dancers.

In Sanskrit the word Karanas means “doing” and it is expressed in 108 important intermediary movements of the limbs. The interpretations include the movement of the body, hip and legs accompanied by hand gesture or “hasta mudra.”

Hastas
The expressive hand gesticulation is highlighted in Bharatanatyam. It is one of the important features of it. The wide variety of hand gestures are shown by the artists. These are nothing but a variety of symbols. The most important of the hand-gestures is the symbol of salutation or Anjali to greet the fellow dancers. Hastas are broadly divided into two types Samyukta and Asamyukta.

Adavus
It is a sequence of steps but all the steps are not similar to the other. They are, in fact, different from style to style in executions. Most of the schools recognize108 adavus styles. While most of the proficient performers use 60 adavus.

Bhedas, Eye & Neck Movements
The Bhedas is compulsory in Bharatanatyam. The dance is virtually incomplete without it. It is the meaningful eye movement of the dancers. Bhratnayan dance will be considered unexpressed without the movement of the eye. In every dance form and style the performer use their eyes and neck extensively. The head movements or shiro bheda has its different forms:

Every performer is expected to do this very carefully for bringing brilliance in the performances.

Steps involved in the dance

Bharat Natyam is a blending of rigid codes of tradition and convention with science. It is composed of three most important dancing styles: bhava, raga, and music. That is, mood, music and melody respectively. Bharatanatyam performers usually make use of 64 kinds of synchronized movement of face, hand, foot, and body. This movement is performed together with dancing syllables.

The dancers usually perform dance with knees. The different kinds of hand movement convey the idea of different emotions. The performer visualizes their body as a triangle. Every step of the dancer depends upon the right consciousness of the body weight and balance that helps enhance the fundamental form of the dance. The dancer must have enough knowledge about  several types of dancing features of Bharat Natyam.

The clothing used for Bharatanatyam is the combination of different dresses that are stitched to each other. The highly customized ethnic wear is very easy to use by the performers for flawless steps. The costume with multiple plated pieces and hued borders of sari enhances the beauty of the dancers. The most essential piece of costume is a pair of Anklets or Ghungroo. The anklets make the appearance of the dancer audible with the striking of the feet on the floor. The dancer wears red color on the tips of the finger, and draw circle on the palm, and lines their feet.

Decline of the Art in Medieval period

Bharat Natyam is the expression of earliest ideas of celebrating the grace and beauty of human body. The elaboration of gestures in the dance expresses different moods and sentiments. Some of the emotions can be traced back to Kaisiki style. During the Medieval period,  Royals families or wealthy Zamindars  used to invite the dancers to their court or houses. In royal households there were positions of  rajnartakis, who dance exclusively for the King’s audience. As India became a republic and the Zamindar families lost their financial clout, Bharatanatyam and other traditional dance forms lost their patronage.

The Revival of Bharatanatyam

It is E.K Iyer, a renowned Indian freedom fighter and a well known artist, helped enhance the status of Bharat Natyam and did everything to make it popular again. Rumkini Devi, a renowned dancer and choreographer, is another prominent person who contributed a lot in reviving the dance. Bharatanatyam has changed its image as a temple art form to a traditional art form performed for masses in public stage shows. Nowadays it is performed  in various festivals and dance competitions, which eventually provided the much sort after lifeline. The dance is now regarded as one of the greatest manifestations of art and adopted as a way of artistic expression by people of all faiths. Finally Bharatanatyam has broke away the chains of suffocation as a temple art form to become a popular art form. 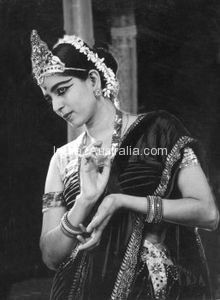 How Bharatanatyam is performed on stage

Bharata Natyam is performed on bare floor with musicians accompanying the dancer sitting at the right of the stage. Usually an image of Nataraja (Dancing Shiva ) is placed on the stage with oil lamps lit in front.

The Dancer enters the stage from the left and does the salutations to the deity or the Guru who usually leads the musicians. The dancer usually wears a silk sari of six yards, interwoven with gold threads. Sari is worn short so that the lower end is 9 inches above the floor. One end is draped between the legs displaying fan like folds in front. A short sleeve blouse with golden borders is worn on top.

The dancer wears gold jewellery both in their hands and neck. The hands and feet have designs painted.

Bharatanatyam added by admin on October 21, 2014
View all posts by admin →