By admin on January 9, 2015Comments Off on Charlie Hebdo – Freedom or Foolishness? 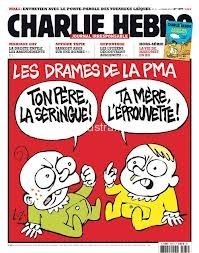 French Satirical Magazine Charlie Hebdo Often Mocked Religion, but this time it did not go well for the publishers and cartoonists working for the magazine. Today, Two Muslim shooters entered into the press room of Charlie Hebdo and picked the journalists, asked for their names, and shot bullets in their head. As per the BBC report “the Arabic cry of ‘Allahu Akbar’” rang out amid the gunfire and one of the gunmen instructed a bystander, “tell the media that we are from Al-Qaida in the Yemen.”

It is not the first time Charlie Hebdo has fallen out with Islamic fundamentalists. Magazine’s previous satires on Islam drew threats and reprisals. In 2012 the magazine published an edition as guest-edited by the prophet Muhammad and titled “Charia Hebdo.”, and its offices were fire bombed by the extremists. Now the question is: who is right and who is wrong; What is freedom and what is abuse of freedom?

Freedom or abuse of freedom?

It will be presumptuous for anyone to suggest what is right and what is wrong but it depends on, which side of the fence we are standing. For the  western world, it is definitely an attack on their freedom of expression but for the Muslim world it was only an act of retaliation for hurting their religious sentiments. On a wider plane, the issue was never of freedom of expression or lack of it.

The real issue here is the concept of a ‘Nation’, whether should we limit our concept of nation within geographical boundaries or religious boundaries. If we confine our thought process within the geographical boundaries, we will find the actions of those terrorists deplorable. But if we adhere to religious boundaries, it is a matter of crime and punishment. Here the justice is served by the self-proclaimed enforcers of Muslim Nation.

Moving on to the question of, “what is freedom?”; definitely freedom is not the right to restrict someone else’s freedom. In this case, the freedom of the Muslims to practice their religion, the way they want . Though the Quran does not explicitly forbid images of Muhammad, the prophet’s teachings prohibit the visual depiction of Prophet Mohammed for a good reason. The key concern is that the use of images could encourage idol worship. This happened in Buddhism and Christianity. Though Jesus was against idol worship, history shows that  Christians saturated their churches and prayer rooms with idols of Jesus and saints .

Do you think Charlie Hebdo was right ?

The French Government – The culprit

No one benefits by going against the wishes of the Muslim Community by visually depicting the Prophet’s Images. The only intention and achievement will be creating racial hatred and racial tension . What we should probe at the moment is the dubious motives of the proponents of freedom of expression. So it is the duty of every government to prevent such actions by introducing laws. What happened in France is the failure of the Government to address such issues. The concept of freedom is not based on one’s right to hurt others. With freedom comes responsibilities to use it wisely. This is not the first time; the Muslims are reacting against depicting the prophet’s image. It happened in Netherlands and around the world many times before. The failure to act and introduce laws to prevent such incidents repeating again is callous.

The use of Nazi salute or Hitler salute is currently a criminal offense in Germany, the Czech Republic, Slovakia and Austria. In Switzerland and Sweden, it is an illegal expression if used for propagating Nazi ideology. In effect the Government has limited the right of an individual to express their freedom in doing one particular sort of salute and being a part of one particular ideology.  By making it a criminal offense Government has in fact restricted the freedom of expression of its citizens. But it was conventional wisdom to restrict that freedom. In a similar way, It is best for the French Government to introduce such level headed laws to protect the religious sentiments of the Muslims, instead of treating it as a prestige issue..

Charlie Hebdo’s comic book on the prophet doesn’t deserve the sort of decent criticisms or a dignified protest the Western world expects it to generate in the Muslim World. Such actions will only whip up further hostility towards the West and portray them as inherently Islamaophobic in the eyes of the Muslim world. Such deliberately provocative actions are a threat to the world peace itself and under estimating the after effects will be foolish.

It is time for the Western Governments to show some levelheadedness and stop being Islamaphobic. It is time to rise up to the occasion to take action to prevent such incidents occurring again.It is best for all concerned to make peace with the Islamic world . All we need is levelheaded  politicians.

Charlie Hebdo – Freedom or Foolishness? added by admin on January 9, 2015
View all posts by admin →

Gun Shots fired at Billu’s Indian Eatery in Harris...
Usha Rayudu to sue Greensborough’s WaterMarc Aquat...
Karuppan
The Fundamental Analysis of share price
What a migrant should do soon after arriving in Au...
Indian man charged with wife’s murder in Sydney fo...
Sri Lankan Migration to Australia and the Civil Un...