Best attractions for Children in Melbourne

By admin on December 13, 2013Comments Off on Best attractions for Children in Melbourne

Melbourne, the most liveable city in the world has many attractions that will engage the children during school holidays. Among these attractions, a few are better suited during winter, which makes it even more special.  Please feel free to use comments column, if you have been to a place, you would like to recommend. 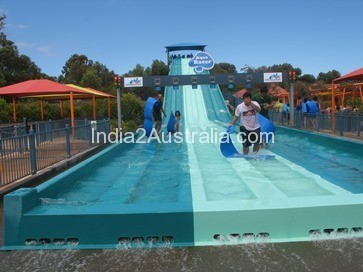 This attraction is best for Children above the age of five.

Adventure Park is an amusement and water park in Wallington, which is ten minutes’ drive from Geelong. The park contains many attractions such as numerous water slides and water playgrounds. 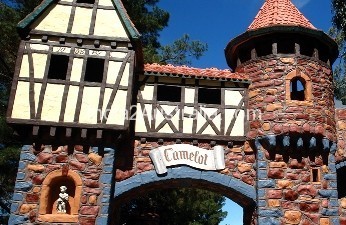 This attraction is good for Children or age 2 or above.

A spectacular rocky hilltop has been crafted into a truly unique place where family and friends come to relax and enjoy a day out together in a tranquil environment.

Most visitors spend here a whole day, but if you are in a hurry allow a couple of hours to get a feel for the place.

The three main areas that combine to form Fairy Park are the Fairytale Land, Camelot Playground and the Elephant Rock Picnic Grounds.

The only true Australian National Narrow Gauge (3′ 6″) Heritage Railway Collection. Ride and see heritage steam and diesel trains from every state all in one very scenic location. The Geelong Steam Preservation Society  is the operator of The Bellarine Railway

Your child can get a close up experience with farm animals . Suitable for children of any age. 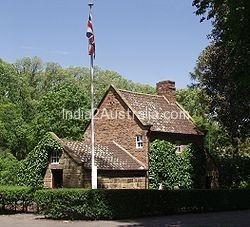 Cooks’ Cottage (also known as Captain Cook’s Cottage) is located in the Fitzroy Gardens, Melbourne, Australia. The cottage was constructed in 1755 in the English village of Great Ayton, North Yorkshire, by the parents of Captain James Cook, James and Grace Cook .In 1933 the owner of the cottage decided to sell it with a condition of sale that the building remain in England. She was persuaded to change “England” to “the Empire”, and accepted an Australian bid of £800, by Russell Grimwade as opposed to the highest local offer of £300.

The cottage was deconstructed brick by brick and packed into 253 cases and 40 barrels, for shipping on board the Port Dunedin from Hull. Cuttings from ivy that adorned the house were also taken and planted when the house was re-erected in Melbourne. Grimwade, a notable businessman and philanthropist, donated the house to the people of Victoria for the centenary anniversary of the settlement of Melbourne in October 1934. 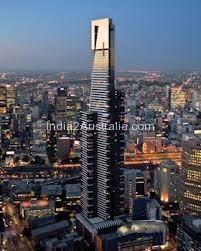 Healesville Sanctuary, or the Sir Colin MacKenzie Fauna Park, is a zoo specializing in native Australian animals. It is located at Healesville in rural Victoria, Australia, and has a history of breeding native animals.

IMAX movies are designed to educate and enlighten as much as they are to entertain. 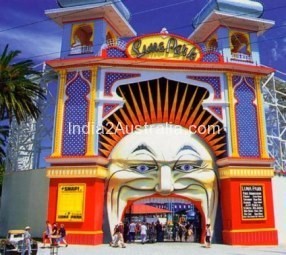 Melbourne’s Luna Park is a historic amusement park on the foreshore of Port Phillip Bay in St Kilda, Melbourne, Victoria. It opened on 13 December 1912 and has operated almost continuously ever since 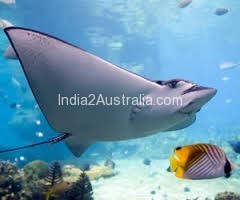 Melbourne Aquarium is a Southern Ocean and Antarctic aquarium in central Melbourne, Australia. It is located on the banks of the Yarra River beside and under the Flinders Street Viaduct and the King Street Bridge.

Melbourne Sports and Aquatic Centre is an international sporting venue in Albert Park, Victoria, Australia. The centre  opened on the 24th of July 1997 at a construction cost of A$65 million.

The Royal Melbourne Zoological Gardens, commonly known as the Melbourne Zoo, has more than 320 animal species from Australia and around the world. The zoo is 4 kilometres north of the centre of Melbourne

The Enchanted Adventure Garden is an award-winning natural attraction nestled in the beautiful hinterland of Arthurs Seat. From humble beginnings, the Enchanted Gardens have grown into a wonderland of family adventure with mazes, gardens and adventure activities that  designed to enliven the senses and challenge the mind.

The National Gallery of Victoria, popularly known as the NGV, is an art museum in Melbourne, Australia. Founded in 1861, it is the oldest public art museum in Australia

The National Sports Museum is a museum dedicated to Australian sport and is within the Melbourne Cricket Ground in Melbourne, Australia

The Old Melbourne Gaol is a museum and former prison in Russell Street, Melbourne, Victoria, Australia. It consists of a bluestone building and courtyard, and is next to the old City Police Watch House and City Courts buildings

For detailed information visit the link

Point Nepean is truly one of Victoria’s beautiful natural landscapes. A special place with so much to see and discover. It has a rich history and played an important role in shaping the early settlement, quarantine and defence of Victoria. The park is  at the very tip of the Mornington Peninsula, with outstanding coastal scenery and panoramic views of Bass Strait, the Rip and Port Phillip Bay.

Polly Woodside is a Belfast-built, three-masted, iron-hulled barque, preserved in Melbourne, Australia, and forming the central feature of the South Wharf precinct.

The Puffing Billy Railway is a narrow gauge 2 ft 6 in gauge heritage railway in the Dandenong Ranges near Melbourne, Australia 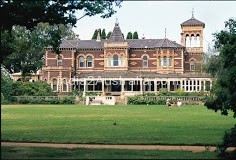 Located only 20 minutes from Melbourne’s CBD, you will find the last of Australia’s grand suburban estates – with a pleasure garden of 5.7 hectares (14 acres) of sweeping lawns, magnificent trees, a tranquil lake, the Southern Hemisphere’s largest fernery, and an orchard with over one hundred varieties of heritage apples and pears.

The Royal Botanic Gardens Melbourne is internationally renowned botanical gardens located near the centre of Melbourne, Victoria, Australia, on the south bank of the Yarra River

There is one more Royal Botanic Garden in Cranebourne

The spectacular 40-minute trip on the Queenscliff Sorrento Ferry Service links Melbourne’s most magnificent coastal regions: the Bellarine Peninsula and Mornington Peninsula.Both destinations have a vast amount of attractions to explore. Then, from Sorrento on the Mornington Peninsula, it’s a leisurely 2-hour scenic drive to Phillip Island and the famous Penguin Parade. From Queenscliff on the Bellarine Peninsula, you’re very close to the glorious Great Ocean Road.

Scienceworks is a world-renowned science museum in Melbourne, Australia. It is a venue of Museum Victoria which administers the cultural and scientific collections of the State of Victoria. It is located in the suburb of Spotswood.

Werribee Open Range Zoo is an African themed zoo in Werribee, about 32 kilometres south-west of Melbourne

Buxton Trout and Salmon Farm is Australia’s first trout farm where trout have been bred for over 50 years. The gravity fed water supply originates from the snowfields of Lake Mountain before cascading down Stevensons Falls and through its streams providing the perfect place to grow a clean, natural food. No antibiotic chemicals or growth hormones are used on our farm. Our farm is a vertically integrated experience – we hatch the fish here and sell them ready for you to eat.

Wilsons Promontory National Park, commonly known as Wilsons Prom or The Prom, is a national park in the Gippsland region of Victoria, 157 km southeast of Melbourne 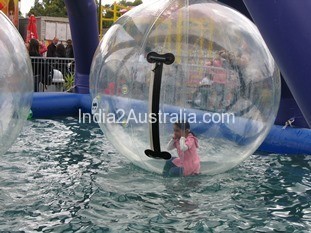 There are many other attractions for Children in Bendigo , Ballarat , Sovereign Hill , Great Ocean Road, Sorrento etc etc.

Best attractions for Children in Melbourne added by admin on December 13, 2013
View all posts by admin →