By admin on October 10, 2014Comments Off on Traditional Costumes of Punjab

The name ‘Punjab’, came from combination of two Persian words, ‘punj’ means five and ‘aab’ means water. The land famous for the five rivers Sutlej, Beas, Ravi, Chenab and Jhelum is also famous for its fertile soil.  For the invading armies of central Asia and Europe, Punjab was historically a gateway to India’s wealth.  No wonder Punjab became the melting pot of various cultures.   The social and cultural formation of Punjab is the combination of number of jatis or groups like Parthians, Kushans, Hephthalites and Greeks. This interesting mix of civilisations is evidently visible in their deeply rooted traditions and customs. The costumes of Punjab are unique in style like their dances and music.

All worldly relationships, Are false and ugly, the only authentic bond is with the mother, and Mother is the very image of God

Punjabis consider their homeland, Punjab in par with their mother, Wherever they may go around the globe and settle, somewhere deep down in their heart a special place will be reserved for their culture, festivals and family ties.

The Punjabis consider it very pious to perform duties and responsibilities to the family members or to those with whom they are closely related. The family unit plays a foremost responsibility in the traditions and the customs of Punjab. Each member of the family performs their respective duties in a very delicate manner in everyday life and activities. Whether it is marriage, birth, initiation ceremonies, funerals or other societal occasions, the Punjabis remain very traditional . 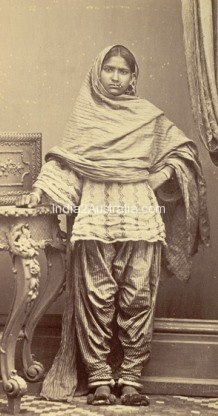 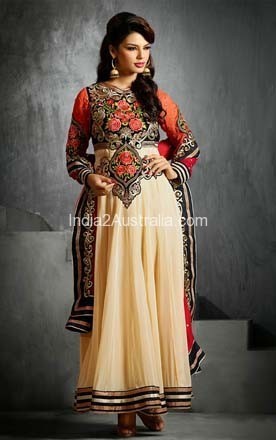 The Salwar Kameez worn with vivrant duppatta is the common clothing for the women of Punjab. It is a variation of that worn in Afghanistan and is different from sari worn in rest of India .  The dress includes a top and a bottom piece. It is a compulsory traditional costume that comes in bright colors with intricate design works. The women also wear shawl designed with excellent phulkari embroidery. 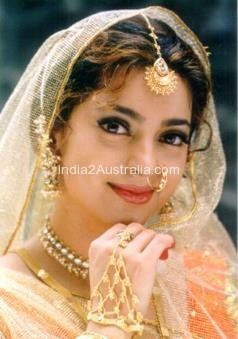 Punjabi traditional dresses are  a wonderful combination of color, style and comfort. In most of the Punjabi costumes Phulkari is very common. The floral design has made it very special for the costumes of women in Punjab. During traditional ceremonies and festivals women wear an amazing type of Phulkari known as Bagh, enriched with excellent needlework of radiant colors and striking patterns. Phulkari embroidery technique literally means flower work, but usually denotes embroidered shawls and head scarfs. 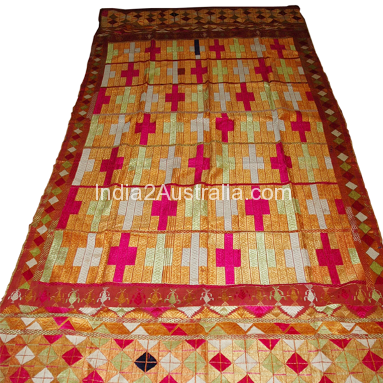 Men generally are found to be dressed in the traditional dress of Kurta and Pajama compared to full sleeve shirt, but without any front opening. Some men are also found to be wearing the lungi or long-established tehmat, with the kurta.

The Punjabi Padgi or Turban

Padgi or the Turban worn by men is a unique headdress considered very special by the Sikh community in Punjab. Around the world,  the Padgi or Turban still remains as a symbol that makes them easily distinguishable from the rest of the crowd. The turbans could be of any color that matches with their dress. Sikhs consider the turban as  a symbol of pride which makes them unique. Most Sikhs grow their body hair without cutting or shaving . However, in the course of time the modern Punjabis shun the custom and cut their hair like other males. 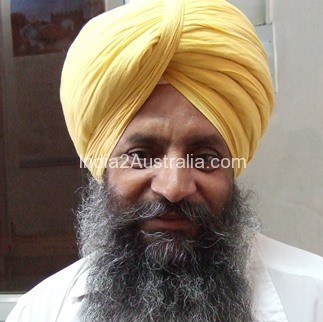 A Video on How to wear a Turban

There is a saying in Punjab, “you can judge a man by his walk, speech and Turban”. Turban represents the essence of a Sikh male. The kind of cloth, the skill in winding the turban, the style in which it is tied can indicate the character of the man. The Sikh Gurus were usually pictured with round free style of turban, starting with a pech (turn, round, layer) at the forehead and building successive pech to cover the head with the rest of the cloth

The traditional Punjabi men never forget to wear traditional shoes called the Jutti, a type of handcrafted footwear typically associated with the Punjabis. Most interestingly, the juttis are without distinction of right or left foot. Over a period of time the juttis acquire the foot sizes, though there are differences between the Juttis of men and women in design. The men’s juttis are extended with a curve at the tip. On the other hand, the one worn by women are extensively embellished.

The Punjabis are very colorful during their festivals like Baisakhi. They put on dazzling dresses to make the occasion more traditional and outstanding. Apart from Salwar Kamiz the women embellish themselves with various kinds of jewelry.The participants of the bhangra and giddha dance also wear the traditional dress to represent typical Baishakhi fiesta as celebrated in  Punjab.

The Bhangra dress is as vibrant and exciting as the Bhangra dance. The costumes for Bhangra dances expose the prosperous and radiant hues of countryside of Punjab and also the enthusiastic pulse of Punjabi folk culture. The men’s costume for Bhangra is very plain and simple  in rather mild colors.

Look at the constituent parts of the traditional Bhangra dress.

Though every part of the Bhangra dress is colourful the Pag is the most striking of them. It is additionally decorated by fixing broad golden lace or gota. Several other dancers are sometimes found with colorful chunni tied around their waist.

Traditional gidda dress for women is quite graceful and also comfortable for them to perform the dance with ease. Giddha dress is rather simple, the rural women are found to wear them almost every day. The bright colors of the dress are only the visible differences between the gidda dress and the usual wears. The ornaments they wear complements the dress. 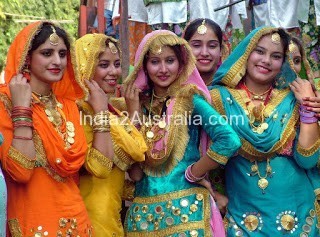 The constituent parts of the Gidda Dress

A Punjabi wedding is an occasion for many to display the exemplary designs and modern trends in the otherwise traditional Punjabi costume. Every wedding ritual is conducted wearing  special costumes. “Kurmai,” The wedding veil or Chunni is given by the Groom’s family after the engagement. All through the days of ceremony , the traditional costumes are meaningfully presented by family members of both the Groom and Bride.

Guru. They enable them to keep their vows made at the time of Amrit initiation. TheSikhs are known to be ready to face torture and death rather than cut their hair or remove any of the sacred symbols.

Keeping one‟s hair in its natural, unspoiled state by not shaving or cutting hair as removing hair and is seen as maintaining the perfection of God’s creation.

The comb is necessary to keep the hair clean and tidy. A Sikh must comb his hair twice a day and cover it with a turban, tying it daily. Wearing a turban declares sovereignty, dedication, self-respect, courage and piety.

The iron bracelet symbolizes restraint from inharmonious deeds. When Sikhs look at the Kara, is made to think twice before doing anything wrong. The round bangle also carries a message that life is never ending.

The soldier’s shorts must be worn at all times. It reminds the Sikh, willingness to be ready at a moment’s notice for battle or for defense. Apart from its moral significance, it ensures briskness during action and freedom of movement at all times.

The sword is the emblem of courage and a weapon of self-defense. It symbolizes dignity and self-reliance, the capacity and readiness to always defend the weak and the oppressed.

Traditional Costumes of Punjab added by admin on October 10, 2014
View all posts by admin →