By admin on December 10, 2015Comments Off on Devadasi 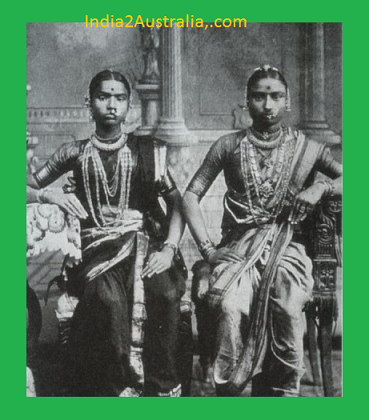 Devadasi literally means “maid servant of God”. Devadasi is a girl, offered to or married to God to serve God for the rest of her life. The earliest mention about ‘Devadasi’ was found in a cave in Banaras and is believed to be from the days of Emperor Ashoka. The carvings on the cave reads: “The excellent young man Devadinna the painter loved Utanuka, the slave girl of the God”.

The Origin of Devadasi System

The origin of the Devadasi practise in India is still a little obscure. This practise could have begun as an escape route for a girl child, from the strict social restrictions or could have emerged as a short term solution for a society wide social problem. There is a distinct possibility that, the custom of dedicating girls to temples emerged as a substitute for human sacrifice to the Almighty to appease and secure blessings .Over the generations, the devadasi system corrupted itself to sacred prostitution and later when patrons of the system became weak financially, to general prostitution.

The origin and evolution of the Devadasi system may find parallels in the Christian community. Even today, Christians in India offer their girl child to the Church to become nuns. In most cases, these offerings are made even before the child is born. A nun is someone who dedicated her life to serve  others or an ascetic who voluntarily chooses to leave mainstream society and live her life in prayer and contemplation in a religious institution. If media reports can be believed, Nuns are exploited by the Catholic clergy across the world .In a similar way, the origin of Devadasi system also could have been based on a noble cause but corrupted over generations.

The rituals of becoming a Devadasi

The Devadasis married to the God (deity) gained the respect and a lasting auspiciousness. Not all women were chosen equally to be a Devadasi. A woman needed to be attractive, smart, audacious, a hard worker, lively, skilled in dance, and have many other good qualities. The parents also could offer a child from birth. A few hundred years back, the tradition demanded a ritualistic sacred ceremony for a girl to become a devadasi.

There used to be a special marriage ceremony for woman to become a Devadasi. The girl is married to the deity. The first part was a vow, which was made, in some cases, before the child was even born, and offered the girl as a gift to the deity. For the marriage ceremony, the girl applies oil, bathe and go to the temple to give gifts to the custodian, who then stood as a proxy for the girl in a worship ceremony. The girl then receives a sacred necklace of beads and her parents celebrate the occasion by feeding the friends and relatives exactly as a real marriage ceremony. After the marriage ceremony Devadasis are owned by the temple. The duties of the devadasis were to sing and dance in the morning and evening attends marriages and other family gatherings bringing auspiciousness to the family. The devadasis did not live in the temples, but were given tax free land by the royal family.

It is believed that the custom of dedicating girls to temples became quite common in the 6th and 7th centuries. Hindu religious texts written during that periods stand testimony to the fact. Some of the texts suggesting that, arrangements should be made to enlist the services of singing girls at the time of worship at temples. A few even recommend the purchase of beautiful girls and dedicating them to the temples. The wealth of the temple was directly proportional to the number of Devadasis in the temple. Devadasis had a very prestigious status as a consequence of their religious dedication and proximity with the rich and the powerful in the society.

Devadasis were considered not to become ritually impure even when they were menstruating. This enabled them to enter the temple even when they are menstruating. Devadasi system in their early years of existence had expected devadasis to perform very important religious responsibilities. But their status in the society is diminished over the years and today Devadasis are looked down as Prostitutes.

The Changed status of Devadasis in society

The caste system in India is based on domination and subordination of people based on caste and gender. The socially constructed concepts of gender inequality acted as a catalyst for the subordination of Devadasis as sex slaves of the upper class. In Indian culture woman are treated as a transferable property gifted to husbands by the father of the girl. But devadasi is gifted or offered to the God, so cannot be married to another individual. By the 20th century a devadasi was considered as the servant of God but the wife of the whole town.

Devadasi practise is also credited with developing and preserving classical dances like Bharatanatyam and Odissi . Bharata Natyam is a modern incarnation of the Sadir dance performed by devadasis of Tamil nadu where as Odissi was performed by Devadasis of temples in Orissa.

Today devadassi practise is outlawed in many parts of India. But wherever it is practised, has become nothing more than flesh trade. The priests of the temple as the representatives of God has the first right to the Devadasi. These weird traditions were prevalent in India since ancient times. Even on those places where Devadassi system never existed Priests maintained their rights for sex through other channels.   In certain parts in Rajastan and Gujarat, there was a custom of sending young brides before marriage to temple for one night to be spent with the priest. Similarly, there was a tradition prevalent in Gujarat, of sending one woman from every household at night to visit the temple priest during the nine nights in navaratri.

As a recently developed custom, the deflowering of the girl is auctioned among the well to do in the society by a mediator in the community. The highest bidder gets the honey pot. Prior to the deflowering ceremony an agreement is made between the upper caste man and the devadasi’s family for the payments and the provision of subsistence, ornaments and clothes to be provided to the girl. It is a traditionally accepted practise that the person who deflower the girl can have enduring sexual relations with her as long as he desires and capable of maintaining her.

Now a days many parents from Devdassi communities dedicate their daughters to God, fearing that the social customs prevalent in their region prevent their daughters having a different future prospect and otherwise will remain unmarried . The financial backwardness of these communities, turn out to be a pressing factor that prevent change in the existing social norms.

Government and the NGO’s around the country are working hard to eliminate the Devadasi system. Complex web of superstitions, beliefs and above all socio – economic backwardness., make their struggle even harder All those issues has to be addressed at a wider level to ensure that a poor mother in India, with tears in her eyes, don’t have to initiate her beloved daughter to prostitution in the name of an out dated practise.

M.S. Subbulakshmi, the Carnatic vocalist was from Devadasi Community. Her mother was a music exponent and Grandmother a versatile violinist.

Devadasi added by admin on December 10, 2015
View all posts by admin →