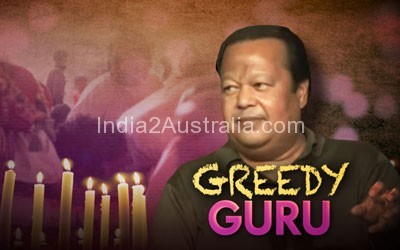 Prem Rawat’s recent event near Peak Crossing, 20km south of Ipswich which ran from September 7 to 11th 2015 has attracted the ire of both the locals and the Australian media. This is a yearly event running for many years. Prem Rawat spoke at a total of nine events over a five day period at the outdoor facility here.

Around 4000 devotees of the Guru from 70 countries, attending the conference paying around $3500 per person, this is a multimillion dollar business for the Guru and the charity that runs the show.

The property, where the meeting is conducted is owned by companies controlled by local delegates of Prem Rawat. These companies are registered in the tax haven of Channel Island.

In 2012 Courier Mail has reported that the 55-year-old guru, who was introduced to Australians as a teenager in the early 1970s and then had followers or “Premies” lining up to kiss his feet, also enjoys access to a riverside Fig Tree Pocket mansion on 1.7ha bequeathed by a devotee and now owned by another Channel Islands company.

The Indian born Prem Rawat is settled in United States since the age of 15. His devotees call him Maharaji. Prem Rawat’s teachings include a meditation practise he calls ‘ Knowledge’ and peace education with its foundations in inner strength, appreciation and hope.

Rawat’s father was also a well-known Guru in India, Hans Ji Maharaj was the founder of Dibya Sandesh Parishad ( later known as Divine Light Mission). Rawat, at the age of 8 , became Sadguru after his father’s death. Rawat had ashrams around the world, and some of those Ashrams encouraged communal life for the devotees.

In May 1974, he married Marolyn Johnson, a 24-year-old follower from San Diego, against the wishes of his mother. With his marriage he severed his ties with his mother and brothers.

As the accusations of running a cult became more prominent, he moved away from the trappings of Indian Culture and religion. His Elan Vital and Words of Peace International projects independent culture, beliefs and lifestyle and not bound by the traditions of India,

In 2001 he established Prem Rawat Foundation. Rawat is reported to have residences in London, New York, Colorado, California, India, and Australia.

Thousands of people follow him wherever he goes; posters of his round, cheerful face adorn the walls of buildings in every major Western city; newspaper reporters and TV cameras cover his every public appearance – particularly his mass rallies, which attract hundreds of thousands of followers each.

Rawat is often criticised for living an affluent life. But his devotees maintain that there is no conflict between worldly and spiritual riches and that Rawat did not advise anyone to abandon the material world.