By admin on February 8, 2013Comments Off on The invasive introduced species in Australia 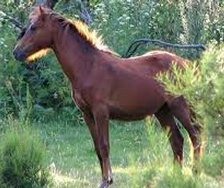 Brumby is the term used for a feral or wild horse that free roam in Australia. It is estimated that Australia has around 400000 Brumbies. How the word ‘Brumby’ came into existence is still debatable. Horses arrived in Australia aboard the first fleet in 1788. The first fleet carried one stallion, four mares, a filly and a colt. In the early days of the settlement, horses were essential for movement around the colony and for working in large properties. This resulted in import of horses from UK, India and other British Controlled areas. Brumbies are the descendants of escaped or lost horses. The properties on those days were not fenced properly and this resulted in horses escaping or lost . Many were released into wild by the owners to fend for themselves.
Today Brumbies are mostly found in Australian Alps region in south-eastern Australia,  Northern Territory and Queensland. Now a days captured brumbies are trained as stock horses or other saddle horses. Brumbies are also sold into European horse meat market and this brings in millions of dollars in revenue for the Australian economy.
Wild horses can do severe damage to the Australian landscape.

With almost a million feral camels roaming Central and Central west Australia, it is no laughing matter for the Government to control the population. Camels are culled annually as a method of population control. Camels were brought from India and Afghanistan as working animals to transport men and material across this arid continent. With the arrival of motorised transport in the outback, thousands of domesticated camels were released into the bush. Camel trains were used in the outback for transport of minerals , construction and other materials.

Camel can go without water for upto 17 days . Camels are  introduced species in Australia

In 1935 Bureau of Sugar Experiment, introduced Cane Toads from Hawaii to Australia in an attempt to control native cane beetle. These beetles were native to Australia and they were detrimental to sugar cane crops. Adult beetles eat the crop’s leaves, but the main problem was the larvae, which feed on the roots. Cane toads were introduced as a biological control method to eliminate the beetle population. But it failed, and the result was a huge population of around 200 Milllion Cane toads hopping around and making merry. Cane Toads have a voracious appetite and will eat almost anything from small birds to bees. The Venom oozing from Cane toads can kill almost any animal and even human beings.

Cane toad skin is used to make fashion accessories
It can squirt its venom upto 1metre.

Rabbits landed in Australia with the Europeans in First fleet as food animals in 1788. The. Infestation of rabbit is appeared to have originated with the release of 24 wild rabbits by Thomas Austin n his property in VIC, in 1859. Austin was an avid hunter and wanted to continue his hobby even after arriving in Australia. Austin brought in rabbits from UK and released them into wild to hunt them later. Many followed Austin and released rabbits in the wild. This resulted in a population explosion of rabbits in Australia. The spread of rabbits in Australia is the fastest spread ever recorded of any mammal anywhere in the world. Rabbit is an introduced species in Australia

Red fox is considered as one of the world’s most invasive species. Red Foxes were introduced to the British colonies of Van Diemen’s Land (Tasmania) and the Port Phillip District and Sydney Regions of New South Wales for the purpose of the traditional English sport of fox hunting. Today there are around 7 Million red foxes in Australia. In Australia, foxes are considered responsible for the extinction of native species wherever they are in large numbers.

Goats originally came to Australia with the First Fleet in 1788. These goats were the ancestors of the feral goat populations present in Australia today. During the 19th Century, the goats were set free by mariners as a measure to ensure emergency supplies of food. However, most feral goat populations have a domestic origin. For instance, cashmere goats were brought into South Australia in 1837. In the 1860s, angora and cashmere goats were imported from Asia in an order to start a goat fibre industry] Some herds were set free when the industry collapsed in the 1920s. Goats were also taken around Australia with settlers, railway construction groups and miners. The recent populations of the feral goat have established from goats used to control weeds in plantation forests and woody weeds in inland New South Wales and Queensland. The current feral goat populations in Australia represent a mixture of these origins. (Courtesy: Wikipedia)
The other introduced invasive pests in Australia are feral cats, feral pigs and the Indian Myna.

The invasive introduced species in Australia added by admin on February 8, 2013
View all posts by admin →