Kailasa Temple – The greatest Man made structure in India

By admin on June 30, 2015Comments Off on Kailasa Temple – The greatest Man made structure in India

For the western world, Taj Mahal represents India. The majestic mausoleum built by Mugal King Shahjahan for his wife Mumtaz Mahal, is considered as an architectural marvel. Elephants hauled in tons of Jodhpur marble and an army of 20,000 stonemasons, gem cutters, marble fitters and laborers toiled for 22 years to complete the tomb in 1648.But nearly a thousand years before the construction of Taj Mahal, India’s greatest architectural wonder was carved out of a rock, The Kailasa Temple. Never before and after, has the world seen such a marvel, which is difficult to create even today with all the modern equipment. 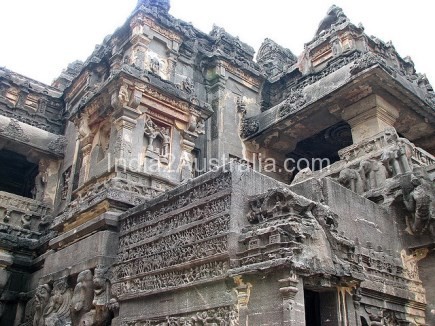 Kailasa Temple is one of the largest rock cut structure in the world. It was built in the 8th Century by Rashtrkuta King Krishna 1. This is one of the 34 temples and monasteries collectively known as the Ellora Caves. The whole temple is carved out of one single rock.

It is estimated that around 400000 tons of rocks were removed in the process of carving the rocks. The difference with this temple compared to other rock cut structures is that, the carvers started at the top of the rock and carved downwards. Even with the modern equipment it will take nearly half a century to build such a structure. 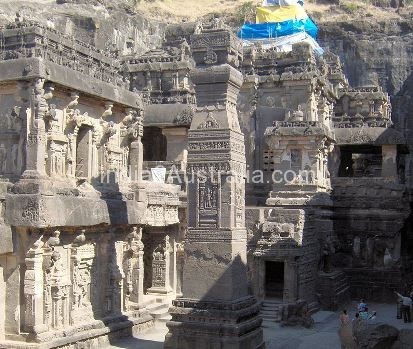 The two storeyed gate way opens to a U shaped courtyard. The monolithic pillar with nearly the height of a three storey building stands in the courtyard with intricate carved designs. The courtyard is edged by a columned arcade three stories high. The arcades are punctuated by huge sculpted panels, and alcoves containing enormous sculptures of a variety of deities. The temple houses several panels with intricate carvings depicting stories of Ramayana and Mahabharata.

The central temple within the courtyard houses the Shiva Linga. The Nandi Structure fronts the temple. All these structures are decorated with elaborate carvings. A rock bridge connects the Nandi Mandapa to the porch of the temple. The structure itself is a tall pyramidic South Indian temple. The shrine – complete with pillars, windows, inner and outer rooms, gathering halls, and an enormous stone lingam at its heart – is carved with niches, plasters, windows as well as images of deities and other figures. 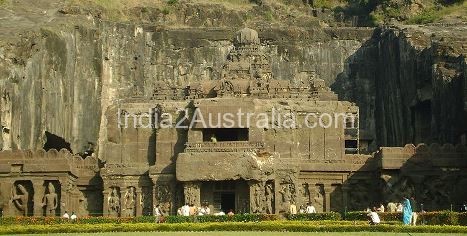 How to reach Kailasa Temple

Kailasa Temple – The greatest Man made structure in India added by admin on June 30, 2015
View all posts by admin →