By admin on October 14, 2014Comments Off on Kali Puja in Bengal

Goddess Kali is often portrayed with startling ferocity with her four arms   carrying variously, a sword, a trishul, a severed head, and a bowl for catching the blood of the severed head. The iconography of this portrayal is often subject to interpretations suitable only for the modern times. She is black in color, with red eyes burning with rage with reddish tongue protruding out of her mouth. The raw form of female power – an interpretation that will satisfy our modern version of Good, Bad and the Ugly, may not be behind the original conceptualisation of Kali.

The literature surfaced in the early 19th century and after, tried to explain the bad form of otherwise supposed to be good Goddess rather explains our mindset than the actual concept behind it. Sakti has many forms and Kali happens to be just one of it. What level of importance and influence the concept of Kali had a few thousands of years back is unknown. Leaving the often amusing modern interpretations of Kali legend behind, an honest and unbiased view will take us to conclude Kali as a purpose built form of Sakti. The nature itself has many forms, sometimes can be ferocious with earth quacks, Tsunamis, volcanoes and storms, but mostly calm and offering all goodness to sustain life. Hindu Gods are personifications of mother nature and Kali happens to represent the ferocious side of mother nature. Reading more into it will prove to be a waste of time. The ferociousness of mother nature may seem destructive for the living entities, but are beneficial for sustaining life in the long term. It is a way of correction or changing the status quo for long term sustainability and Kali as a destructive figure, just represents mother nature in that aspect.

The word “Kali” derived from the word “Kal” that means time. This Sanskrit root word suggests “time” that is all-pervading and all-consuming. There is nothing that can escape the purview of time. There is nothing that can escape the march of time. The other explanation is the name Kali comes from kāla, which means black, in honour of being the first creation before light itself. Kālī means “the black one” and refers to her being the entity of “time” or “beyond time. All these explanations suit the nature as well and this again proves the point that Kali represents the ferocious aspect of mother nature – nothing less and nothing more. Philosophers, writers and theologians have been working overtime to fit Kali in our mindset of right and wrong and the good and the bad, an exercise that took us nowhere.

A few such self-serving interpretations of Kali may take us to a philosophical dead end and they go as follows.  Among the multiple forms of the goddess, Kali is more compassionate than the other deities. Because she, as a counterpart of Shiva, is the destroyer of the evils. She sanctions liberation. She is the counterpart of Shiva, the destroyer of unreality. The ego beholds Mother Kali and observes in her its impending demise. But, those who have a strong attachment to ego can’t be receptive to goddess of Kali.

A fully developed soul that engages in the sacred practice to do away with the misapprehension of the ego observes Goddess Kali as very charming, loving, and brimming with unfathomable love for the devotees. She treats her children  with great care and affection.

Why Kali is a purpose built form of Sakti?

The legend behind holding a sword, as well as a severed head with swooping blood represents a great battle in which she destroyed the demon Raktabija. The black skin symbolizes the possibilities of the manifestation out of all the creation, and at the same time the possibilities of eventual breaking up. Kali iconography is mostly based on the legend of Kali’s battle with Raktabija, a demon. In the battle, the demon Raktabija is undefeated because of his ability to reproduce himself from every drop of his blood that reaches the ground. Countless Raktabija clones appear on the battlefield. Kali eventually defeats him by sucking his blood before it can reach the ground, and eating the numerous clones. 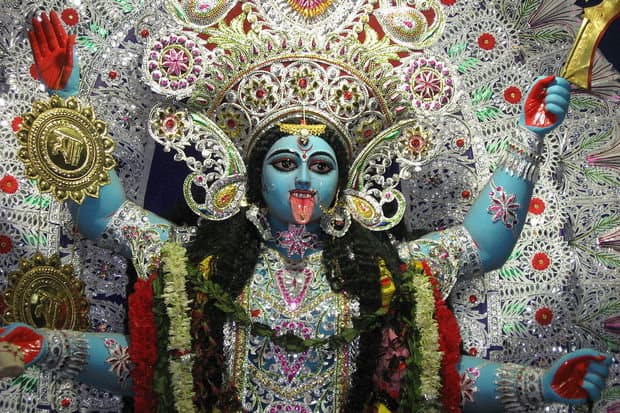 The biggest disaster that engulfed Hinduism and the concepts of Hinduism was the invasion of India by European countries. The British, naturally took an interest in Indian mythology and tried to fit it in the western mould. They found an urge to explain everything to fit the western mindset. If some of the Hindu Gods are portrayed fair in colour, there is  no need to give an explanation on why some other Gods or Goddesses are portrayed black especially in a country like India where people of varying skin colours live.

The whole concept of Hinduism lies in explaining the nature in easily understandable symbols and at times they used human or divine conceptualisation. One may get stuck when curiosity bites with a pressing question, “why should an ancient civilisation try to explain nature with symbols, when nature is all visible and easy to understand even without a symbolic representation?” . There lies the little, well-kept secret of Hinduism. The power of nature can be invoked into forms and thus invoked forms are as powerful as mother nature herself. The forms can be specific representations to do specific deeds. The Tantric Vidya was in fact the soul of Hinduism. That explains the 33 million Hindu Gods. The western civilisation which was stuck debating one God is the right way to go or not would have never understood the power of nature and the ways to invoke nature in forms to achiever almost anything. They were running in the wrong direction as far as God is concerned, but they reached somewhere near it through another route and they called that route, “Science”. Science used the power of nature to create material comfort. Same route but different goals, Sanathana Dharma and western civilisation differed there. To make it simple for dummies, if we show a latest model of Ferrari car to a boy from the Amazon Jungle, and explain to him that it is created by things available in earth, how does he react?

Though Kali is as ancient as the Indian civilisation, Kali puja as a celebration has its roots grown only few centuries back. There is a mention of Kali Puja in 17th century Hindu devotional poem, Kalika Mangalkavya. Kali puja was introduced in Bengal during the 18th century, by King Krishnachandra of Navadvipa. It gained popularity in the 19th century, with Krishanachandra’s grandson Ishvarchandra and the Bengali elite; wealthy landowners began patronizing the festival on a grand scale.

How Kali is worshipped?

During Kali Puja, Kali idols made of clay are worshipped at home or at Pandals (Pavilions) in public spaces. Kali is mostly associated with Tantric Vidya so there is a slight difference in way the Kali is worshipped compared to other Hindu Gods. Along with Kali idol, idols of Kali’s concert Shiva is also placed.  During the Puja offerings are made of red hibiscus flowers, animal blood in a skull, sweets, rice and lentils, fish and meat. Mostly Pujas are conducted at night and those who strictly follow the customs, pray and meditate all through night. There used to be animal sacrifices for Kali Puja but nowadays there is a shift toward non tantric worship of Kali especially in the households. 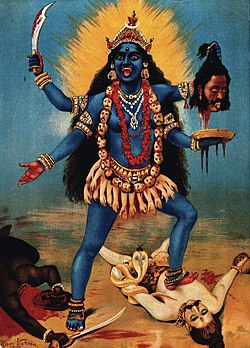 At the Kalighat Temple in Kolkata and in Kamakhya Temple in Guwahati, Kali is worshipped as Lakshmi on this day so as to reflect an essence of Vaishnava Haldars on Kali worship. Goddess Lakshmi is worshipped in her three forms, Maha Lakshmi, Maha Kali and Maha Saraswati on this day. The temple is visited by thousands of devotees who offer animal sacrifices to the goddess. Another famous temple dedicated to Kali in Kolkata is Dakshineswar Kali Temple. The famous Kali devotee Ramakrishna was a priest at this temple. The celebrations have changed little from his time.

There are number of Kali temples or shrine in Wes Bengal. Each of them has a particular interesting background and history.

Kalighat Temple: Kalighat temple is regarded as one of the 51 Shaktipeethas in India. Though the current temple is only 200 years old, the worship of Kali where the temple is located dates back many thousands of years.

Dakshineswar Kali Temple: Built in 1855 by Rani Rashmoni, a pious lady from a zamindar family, the temple became well known in India due to its association with Ramakrishna Paramahamsa, a mystic of 19th Century Bengal.

Mayureswar – II Temple: The temple is in the jurisdiction of Mayureswar-II Panchayat Samity has a long history and rich heritage. Its glory reached great heights during the medieval period. The most admired chief of the Gour community of variety Vaisnavism, named Nityananda Mahaprabhu found his roots of devotion in this village of the region Mayureswar. Actually, in every district of West Bengal there are lots of such temples. There is an adage that with “10 Bengalis together, a Kali Temple is there.”

Kali Puja in Bengal added by admin on October 14, 2014
View all posts by admin →