By admin on October 21, 2017Comments Off on Kalaripayattu and places to learn in Australia

Bodhidharma, the Buddhist Monk from South India, is credited as founder of  martial arts at the Shaolin Temple in Henan Province, China. The martial art he taught at the world famous Shaolin temple 1500 years ago was based on Kalaripayattu, which originated in the southern state of India, Kerala. Kalaripayattu is considered as one of the oldest martial arts. In mythology the origins of kalaripayattu is attributed to warrior Sage Parasurama. Parasurama learned Kalaripayattu from Lord Shiva and then imparted the knowledge to twenty-one of his disciples. It is believed that Parasurama and his disciples have established 108 Kalari schools in Kerala. 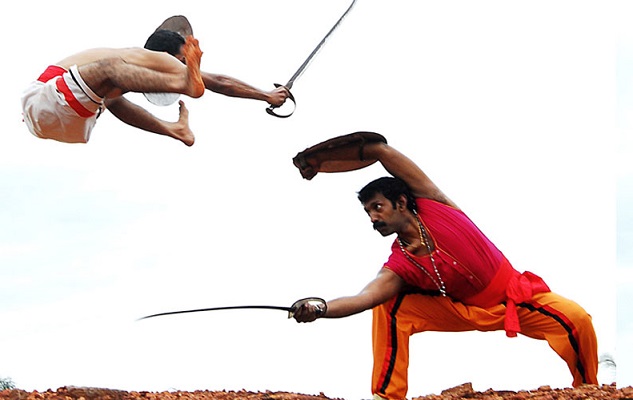 But from historians view point, Kalaripayattu evolved during the Sangam Period spanning from 3rd century BC to 3rd Century AD. After the 12th century AD, Kerala came under the rule of warring chieftains which resulted in private armies and mercenaries fighting for control. Kalaripayattu even became a norm in settling disputes between local chieftains and landlords. Exponents of Kalaripayattu also known as Chekavars, representing local chieftains fought to death in duels to settle disputes. But the golden period of Kalaripayattu was between AD 1500 to 1700.  Vadakkan pattukal (Northern Ballads), Ballads of Kerala, immortalised the valour and chivalry of Payattu Gurukkal (experts of Kalaripayattu). Even after many centuries the valour of Unniarcha, Thacholi othenan and Aromal Chekavar lives on.

Kalaripayattu also influenced almost all dance forms that originated in Kerala. Dance forms like Kolkali, Mudiyettu, Pooram kali, Patayani , Thitambu Nirtham and Kadhakali had borrowed body movements from Kalaripayattu. The body control achieved by students of Kalaripayattu also helped them to crossover as dance artists. Only a thin line divided Kalaripayattu as a fighting technique or as an art form. The resemblance is striking.

Kalari Payattu is taught inside a Kalari by Kalari Gurukkal (Teacher of Kalari).  Traditionally Kalari is constructed by digging out earth and forming a rectangular sunken area, three feet deep and forty-two feet in length and twenty-one feet in breadth. The south west corner of the Kalari is Poothara ( ‘poo’ means flower ‘thara’ means floor) reserved for the guardian deity of the Kalari.

The Poottara is a seven or nine -tiered platform constructed as a tapering quarter circular steps. Between Poothara and the western main pillar is Gurustana (Abode of the Guru). Poothara and Gurustana are sacred areas of worship and usually a traditional lamp is lit. Ethics is very important in Kalaripayattu teachings. The importance given to the deity and Gurustana are just an indication of its traditional standing.

Kalari entrance is at the east. Steps are constructed to reach the floor of the Kalari. Kalari is also constructed in different ways with different sets of dimensions and bears different names.

The traditional dress for a Kalari student is a Langotti (a loin cloth cut in a special shape to be tied as an underwear). The rule of thumb for Kalari training is whatever ailment required as a result of injury (cuts and bruises or sprains) during training is done at the Kalari itself. Usually traditional Kalari teachers will have good knowledge in Ayurvedic treatments. They will be knowledgeable in the field of traditional medicine and massage. Student are given a body massage by the teacher to increase their body flexibility. Kalari Thirummal (Massage) is different from other types of massage. This also involves Marma Chikiltsa (curing by applying pressure on Nerve points) . During training the students will apply medicated oil on their body.

The advantages of learning Kalaripayattu

Kalaripayattu is not just another martial art but it’s a means to healthy living. It involves a way of life and has strong links with Ayurveda (traditional herbal treatment of India) , Kalari Chikitsa ( Kalari medical treatment) specialises in curing back pain and Spondylitis. Uzhichal ( Kalari Massage) is unique and improves health and wellbeing of individuals and makes body supple.

Learning Kalaripayattu helps in coordinating and synchronising the movements of hands, legs, and brain. It improves flexibility and strength. Researches have shown that it improves body immunity. It also improves stamina and above all it helps to stay fit.

It is proved to improve concentration, patience, self-discipline and self-awareness.

Kalaripayattu and places to learn in Australia added by admin on October 21, 2017
View all posts by admin →