By admin on January 23, 2016Comments Off on Let’s cheer Kevin Rudd for United Nations Secretary-general Post 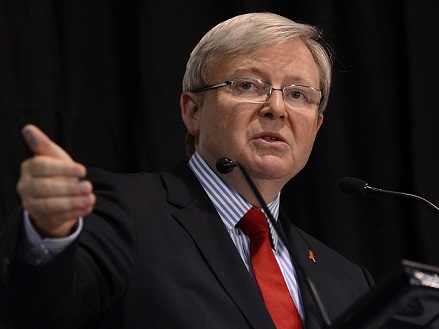 It is no secret that former Australian Prime Minister Kevin Rudd is being considered for the top job at the United Nations. After leaving active politics in Australia, Kevin moved to US to pull the strings and to an extend he has succeeded in knocking the right doors. The current secretary general Ban Ki Moon will finish his term this year. Ban Ki-moon was elected as UN secretary-general in 2006.

The Australian Federal Government has indicated that it will consider backing Kevin Rudd for the top job at the United Nations, if the former prime minister puts his hat in the ring. Not just the hat, Kevin has already put his whole body in the ring too. Foreign Minister Julie Bishop said Mr Rudd has yet to apply for the position.

As the Prime Minister of Australia, Kevin botched Australia’s strict immigration policy for a softer one which resulted in chaos. It was blamed then that Kevin took the softer approach as his eyes are focused on the top job at the UN. Mr Rudd has maintained a closer relationship with UN since then. Kevin pushed for Australia’s membership of the Security Council and also served on the Secretary General’s high-level panel on global sustainability. He also served as a friend of the chair at the UN’s climate change conference in Copenhagen in 2009.

Member countries are due to put forward their nominations for the positon within weeks. Murdoch’s media in Australia reported that Mr Rudd is unlikely to be Australia’s official nominee. But given the indications from the Federal Government, Kevin will be Australia’s choice as there are no other candidates in the ring that matches his stature. Rudd’s spokesperson told The Australian that he was not a candidate and the next secretary-general would likely be chosen from Eastern Europe. As usual Murdoch’s media has already started spreading venom against Mr Rudd.

The brilliant but baby faced, Kevin Rudd has wide ranging experience in foreign service. Before entering politics, he was a career diplomat with South Korea’s Ministry of Foreign Affair. Multi lingual Rudd has friends in both Chinese Government and US administration. He maintains a closer personal relationship with current President Barrack Obama as well as his possible replacement Hillary Clinton.

Croatian Foreign Minister Vesna Pusic, former UN General Assembly president Srgjan Kerim from Macedonia and former Slovenian president Danilo Turk have been endorsed by their governments for the role. It is believed that one of them are most likely to succeed Ban Ki Moon. Having been led over the past three decades by a South Korean, a Ghanaian, an Egyptian, a Peruvian and an Austrian, the time has come for an Eastern European to take charge. That is exactly what is going against Mr Rudd at this crucial juncture.