By admin on October 1, 2017Comments Off on Magpie Attack 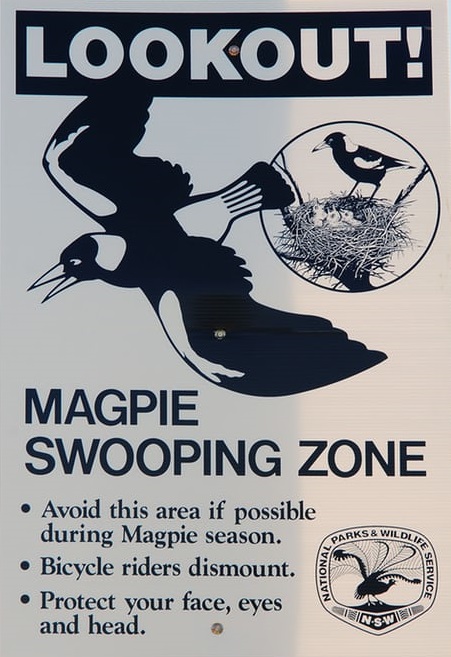 Indians  in Australia prefer to call them, “white and black crows” but unlike the European magpies, Australian magpies are not from the crow (corvid) family, though they belong to the broad corvid lineage. The early European settlers to Australia named them ‘Magpies’ due to their colour similarity with European Magpies.

They are good mimicry artists as well as singers, with an ability to make wide variety of calls and can mimic the sounds of over 35 species of birds and even humans’ dogs and horses. But the likability of the species ends there. They are best known for their swoop and peck. From August to November is Magpie breeding season and they swoop intruders if they feel threatened. They mostly target eyes and ears which makes it even more dangerous. To make things worse, once they target you, they don’t stop it at one attempt. They keep on charging back aggressively to attack. The male magpie usually carries out the attacks to protect his offspring, which usually inhabit the nest for six to eight weeks between August and November. You are more prone to attack when you walk through high foot areas like Parks.

The early European settlers of Australia were baffled by the bird’s behaviour. Australian Newspapers from 1870 onwards carried many stories of Magpie attacks which resulted in people going blind and even resulting in accidental death due to their attack. 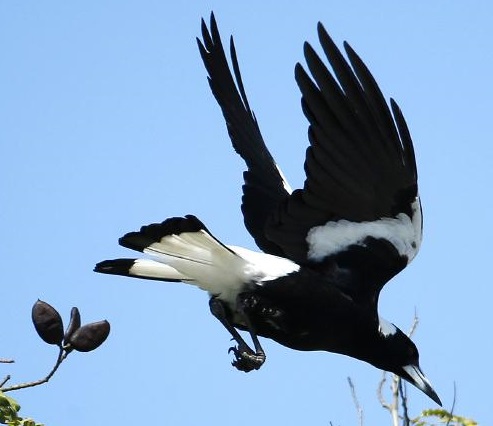 According to Griffith University behavioral ecologist Dr Darryl Jones, only around 10 percentage of the Magpies attack and of that about half of them target pedestrians. The remaining half go for either cyclists of posties and only a very small group of magpies’ attack everybody. But considering the population of Magpies in Australia, this still is a large number and every year around 3000 magpie attacks are reported around Australia. Once in Brisbane one agitated magpie had cut the faces of more than a hundred children.

If this is not terrifying for you, there is more. Magpies have long memories. They actually remember people and faces and attack the same people each year. So the usual walkers and those living near Magpie populated areas are put on notice.

How to protect yourself from Magpie attack

There are many ways we can protect ourselves from Magpie swooping. Be alert when you are walking through Parks and known magpie nesting sites. There is a website to know places where Magpie attacks are reported. https://www.magpiealert.com/

If you are riding a bike and you find them keep on swooping on you, it is best to get off your bike and walk.

Never try to provoke the magpies and educate your little monkeys not to do that as they are territorial birds and will try to protect their nest. Moreover, they have long memories and once they target you it could become a lifelong menace for you.

Researchers even suggest making friends with them by feeding them. This works especially when you are living near a magpie populated area. Unlike humans they don’t attack friends.

If possible, carry an umbrella.

When you are attacked try protecting your eyes with your hands. There are incidents of people going blind and your eyes are two rationed for a life time.

For those who are interested to know, how the early European settlers viewed these intelligent birds, we have three newspaper reports dating back to 1875 and 1876. This is a good read.

The ferocity and courage of the Australian magpie, more especially, during the season of incubation and rearing of their ‘young; are well known to naturalists. They will fiercely attack even human beings who may happen to go near their nests, and young ducks and chickens are often killed by them.

A correspondent of the Geelong Advertiser, writing from Drysdale, thus refers to a battle which took place between a pair of magpies and a game hen :—” My attention was directed by a great noise to a hen with a brood of four or five chickens, a game fowl, formerly in the possession of a gentleman, deceased, well known for his penchant for these fancy birds. Two magpies were fiercely attacking the brave mother, who, with the courage of her race and the instinct of maternity, was defending her brood. On my appearing on the scene, the brood ran to me, but the combatants took bat little notice of my presence. The male bird, soaring some 30ft. high suddenly dropped. It was in vain then hen tried to escape, the scattered feathers showed the accuracy of the ” fell swoop. Nevertheless, the hen strove to meet her agile enemies by flying into the air, charging with in dubitable resolution. After the battle had lasted some time, I drove the assailants off, who retired sulkily to a neighbouring fence, while the hen, collecting her brood, scuttled off to a place of safety, uttering defiant cries, as though she challenged a renewal of the combat at a time when she should not be hampered by what advertisers call ” encumbrances.”

THE AUSTRALIAN MAGPIE; ! ‘The Banner of Belfast says: — ” The ‘Australian magpie has always been looked ‘upon a most useful bird, and to the agriculturist its services’ are in a measure indispensable in as much.as it preys on grubs and; creeping insects -which are the precursors in many instances of great destruction amongst crops. Apart from its general usefulness in this respect the magpie is a public benefactor,’

If the following may be taken as a criterion –  On- Saturday morning two gentlemen; who were walking in the, direction of Belfast had their attention attracted by the shrill screeching of two of these birds which at first sight appeared to be fighting. A closer inspection however proved this supposition to be erroneous. For on the ground were a large black snake, with which the birds were engaged in deadly conflict. The attitude of the snakes was in the defensive in the extreme. But with such tact the magpies approached him that it was pretty clear from the first that his snake ship was a gone coon.

Our informant states that one of the bird would fly up a little and then make a feint at the reptile’s head while the other pinned by the back. This went on for some time and the snake evidently was getting the worst of the battle. It was standing almost erect on its tail, with its jaws distended and making desperate darts at the aggressors, who very adroitly evaded his attacks. Finally, one of the birds flew up in the air immediately above the snake. And with almost incredible rapidity darted down and seized the reptile by the back of the head and prepared to fly away with it. The weight of the snake was evidently too much for the puny ornithological specimen in black and white. But gradually it ascended, the snake writhing and wriggling to free itself, but without avail. When a considerable height in the air as our informant expressed it, down came the snake wallop, on the metalled approach to the bridge, the bird descending also. The spectators then with a stone gave the snake a coup de grace and the magpies flew away in triumph. We have before heard the antipathy of the laughing jackass to snakes, but never an instance of magpies being useful this way. After this we should hope no would willingly destroy a magpie.

The Commissioner of Customs has received a strong letter in favour of the continued protection of the magpie from a farmer and vigneron. This individual has carefully investigated the bird’s habits,

and asserts that it has done much to preserve his crops and trees from insect pests. He considers that but for the magpie he would have had a host or caterpillars, moths, beetles, and locusts down upon him. In further testimony in favour of the bird, he relates that he has often seen magpies attacking snakes, and even chasing hawks away from the neighbourhood of hencoops. After this latter statement one is inclined to reflect that there must be some intelligent examples of the species in his locality.

Magpie Attack added by admin on October 1, 2017
View all posts by admin →

Do you think Deepak Dhankar deserves the guilty ve...
Police looking for missing Indian woman from Cala...
To tip or not to tip in Australia
Lords
Finally, found a Good Car Mechanic in Melbourne
Holi Celebrations in Perth 2019
Ramdan Eid Bazaar in Sydney