By admin on September 17, 2013Comments Off on Malayalee Doctor Manu Gopalan Convicted in Australia for rape

Manu Maimbilly Gopal, 39, a former  employee of the Sunbury Medical Centre in O’shanassy St, accused of digitally penetrating two women for his own sexual gratification February last year , has been found guilty of raping  by the Supreme court in Australia. The Supreme Court Jury found him guilty of two counts of rape after a two weeks trial. Justice Geoffrey Nettle remanded Gopal for a pre-sentence hearing on September 26.

One of his victims, an 18-year-old student, described in  the court how she shielded her face with her arm during the examination in a “silent scream”. She made an appointment with Dr. Gopal for stomach cramps. Without asking for her consent or explaining why he needed to conduct a vaginal examination, Dr. Gopal violated her modesty. This examination lasted around four minutes.

Gopal’s second victim, a married mother of four, went to the clinic at about 5pm on Saturday, February 25, complaining of a bad pain to her right side.  The court heard that Dr. Gopal performed the same finger action he had done with his first victim. The patient had to push Gopal to escape.

Gopal, whose wife and young daughter live in India, was arrested at Melbourne International Airport on March 1 as he waited to board a flight to the Indian city of Kochi after being told police wanted to interview him about the sexual assaults. He had bought a one-way ticket.

Dr Manu Maimbilly Gopal raped the first of his two victims on the day his boss went to Queensland for a holiday.The Indian doctor, 39 – who was found guilty last week by a Supreme Court jury of two counts of rape and will appear in court on Thursday for a pre-sentence hearing – had been hired by Dr Phillip Wood, who owned the Sunbury medical centre, to work after hours at the clinic.Dr Wood and his wife, Leanne, who worked as one of the practice managers, were determined to open the O’Shannessy Street clinic at night and on weekends to help Sunbury residents who needed medical attention out of normal office hours.None of the day staff, either doctors or administrative staff, were to be involved, which was why the Woods decided to hire Gopal to work at the after-hours clinic when it opened in November 2011.

Gopal had gained his degree, a Bachelor of Medicine and a Bachelor of Surgery, in 2001 from the Calicut University in the southern state of Kerala in India.After his graduation he worked in a hospital in Kerala and then as a GP in a community health centre. In November 2008 he passed the Australian Medical Council Offshore MCQ examination, and in February 2010 completed the international medical graduate clinical bridging course at Monash University.In June 2011 the Australian Health Practitioner Regulation Agency received an application from Gopal to work in a limited capacity at the Sunbury Medical Centre.He began working after hours at the clinic from November 2011 but his registration was initially limited, meaning he had to be supervised by Dr Wood for the first three months. He became eligible to work unsupervised on February 12 last year.The Woods left a brief holiday in north Queensland 11 days later on February 23.They had intended to close the after-hours clinic while they were away but Gopal convinced them to keep it open, arguing Dr Wood was only a phone call away if needed.Gopal also told the couple he needed the money.

It was just before 9pm that night when Gopal’s first victim, an 18-year-old full-time student who lived with her parents, came to the clinic.The young woman, whose parents were overseas, was feeling sick with stomach pains and her boyfriend suggested she see a doctor.Gopal led her into the consulting room and asked her if it hurt to have sex. She was shocked at the question and said no.Gopal then asked the young woman to get on the examination bed so he could examine her abdomen. She lay down and he felt her stomach through her shirt. She pointed out the area where she was in pain and he then told her to roll on to her stomach and pull her underwear down and her skirt up.Gopal then asked her if she wanted him to put on gloves. She said she did and Gopal then went to lock the door.He asked the young woman to roll on her back again, remove her skirt and underwear, then lift her knees and spread her legs.Without telling her what he was about to do and without asking her consent, Gopal inserted two fingers into her vagina.The young woman was scared and put her arm over her face in a “silent scream”.She believed Gopal’s actions were sexual and not a normal medical procedure.She sat up and tried to close her legs, forcing Gopal to stop the examination. Gopal told the young woman after she got dressed that she had a haemorrhoid and he prescribed some medication. She left the consultation room upset and shaking. She had to unlock the door to return to the reception area. Gopal followed her out and told her to re-book for a Saturday appointment before asking the receptionist to bulk-bill the young woman for a double appointment. The young woman later cancelled the Saturday appointment.  She left the clinic with her boyfriend at the time before she burst into tears, collapsing in his arms. The young woman told her boyfriend what had happened and they discussed going to the police but decided they should be careful about making accusations against a doctor. She then went to see a female GP at a different clinic for a second opinion. When she told the GP about her consultation with Gopal, the GP urged her to go to the police which she did on February 26 .

A day after Gopal raped his second victim, a married mother of four. The second victim had been experiencing pain in the right side of her abdomen for several days when she went to the clinic about 5pm on the Saturday and saw Gopal. She described her symptoms to Gopal before he asked to get on the examination bed so that he could feel where the pain was coming from. When he hit the spot, she cried out in pain. Gopal told her it was not appendicitis, but it could be her ovaries and that he needed to conduct an internal examination. The woman was reluctant and asked Gopal if it was really necessary but he insisted. She thought it would take too long to get an appointment with her normal GP so she consented to the examination. Gopal then pulled the curtain around the side of the examination bed, but remained on the inside of the curtain as the woman removed her shoes and trousers. As she was about to remove her underpants, Gopal told her not to worry and he would just move them to one side. He told her to push her legs out to the side a bit. During the examination, Gopal asked her: “Do you want me to do it softer? Do you want me to do it faster? Does it feel good now?”  The woman started to question what was going on and told Gopal several times that he was not touching the area where she was experiencing pain. The woman believed Gopal was trying to arouse her and became upset and stopped the examination. Gopal asked if she was happy and she told him she wasn’t. He told her she had an infection and gave her a prescription and a referral for an ultrasound. When she went to leave the room, she discovered the door was locked. The woman then told the receptionist she wanted to make a complaint against Gopal before driving to her sister’s house where her husband and children had been visiting. She began to cry and told her husband she thought she had been sexually assaulted. Her husband called the police. When Gopal was informed by the clinic on February 26 without explanation that his employment had been terminated, he booked a one-way flight to the Indian city of Kochi, departing at 11am on Thursday, March 1.

Police contacted Gopal on the Wednesday afternoon, February 29, to advise him he was being investigated for sexual assault. Gopal agreed to attend the Fawkner Police Station at 4pm on March 1 but then changed his flight so that he was booked on the 1.05am flight to Kochi on March 1. At 11.30pm on February 29, after Gopal had passed through customs and was waiting to board his flight, he was arrested. 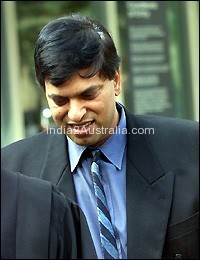 This is not the first time an Indian Doctor is convicted in Australia on sex charges. In 2002 Dr. Sabi Lal was charged with digitally raping a patient, indecently assaulting her and then attempting to pervert the course of justice. For these charges he was given a two and a half year suspended sentence.

Dr. Sabi Lal was de- registered in 2003. But in 2009 Dr Lal was granted registration on the condition he see only male patients aged over 16. 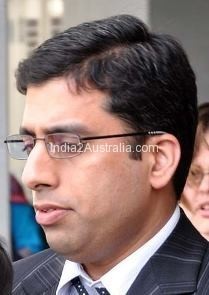 An Indian-born doctor Sohail Ahmad Khan Durani was convicted to two years and four months in prison for sexually assaulting a patient while working at Royal Perth hospital in 2011. He was convicted on three counts of indecently assaulting the woman by grabbing her breasts and two counts of digitally penetrating her without consent. He was eventually de registered from practising.

Dr. Arvind Balakrishnan , a doctor of Indian descent practising in Sydney was convicted for sexually assaulting a patient.

In June 1993, Dr. Arvind Balakrishnan whilst conducting a physical examination of a female patient, in his consulting rooms did the following improper or inappropriate actions –

(a) Suck on the patient’s left breast nipple for one to two minutes.

(b) While sucking on her left breast touched the patient’s right breast with his hand under her bra.

On 8th November 1993 around midday, the practitioner whilst conducting a physical examination on an undressed female patient,  for stomach pains, did the following  inappropriate actions.

Dr. Arvind Balakrishnan was de registered as a medical practitioner in NSW.

NB: International medical graduates are more likely to have complaints made against them than their Australian-trained counterparts a University of Melbourne study has found. 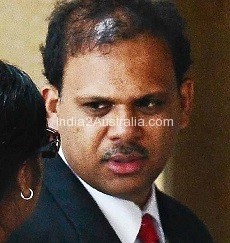 Moodley had been working as a GP at Gatton, Laidley and Plainlands – west of Brisbane – when he sexually assaulted his patients. He pleaded guilty to nine counts of sexually assaulting patients, aged 17 to 40 over a period of 6 years. He had been suspended from practice since 2009, based on the sexual assault charges.

One of the complainants – a 36-year-old woman who had attended Gatton Plaza Medical Centre for back and neck pain – noted that the doctor was groaning as he rubbed himself from side to side against her upper thigh and hip.

Another of the victims – a 35-year-old woman who saw Moodley when he was working at a Plainlands doctor’s surgery – made four separate complaints against the former GP.

Judge Greg Koppenol in January ordered Moodely spend a minimum of 16 months of the four year term in jail.

Malayalee Doctor Manu Gopalan Convicted in Australia for rape added by admin on September 17, 2013
View all posts by admin →