By admin on April 10, 2013Comments Off on Mehndi Designs

The word Mehndi brings in images of newlywed brides with intricate floral designs adorning their arms, hands and legs. Mehndi which is also popularly known as Henna has been used for cosmetic and medicinal purposes for centuries. Mehndi has been pre dominantly used in India, Pakistan and Arabic Countries. Today Mehndi has a global appeal. It is used for body art, hair coloring, temporary tattoos etc. Use of Mehndi is not just restricted to wedding ceremonies or festivals. Youth is looking at Mehndi as a versatile fashion accessory.

Existence of Mehndi dates back to 2100 BC. Babylonians used Mehndi paste as a dye to color their Hair. Babylonians also used to apply paste of finely ground Mehndi leaves on their hands and legs to cool the body. Cleopatra is known to use Mehndi in her beauty regimen for maintaining her lustrous hair. Chinese Monks started using Mehndi leaves and pastes in medicines since 1232. In India and Pakistan, Mehndi is considered to be a symbol of fertility and love. Hindu and Islamic weddings require the bride to adorn auspicious Mehndi designs on her hands and legs.
It is also believed that darkness of Mehndi stain symbolizes deep love between the newlyweds. Indian Mehndi designs are intricate and floral. These designs use different symbols like Fish, Elephant, Pot of Water, Hearts etc to depict a theme. Arabic Mehndi designs rely heavily on bold floral patterns.

Why is Mehndi Popular across the globe?

Mehndi or Henna has earned a global recognition thanks to its versatility. Mehndi does not leave permanent stains on the skin. Mehndi stains fade away in 10-15 days. People can therefore use Mehndi to sport different exquisite designs. They don’t have to worry about sticking to the design for life long. They can change the designs based on the occasion. Non- permanent nature of Mehndi has made it big in the world of temporary tattoos. These Mehndi Tattoos are quite a rage among the youth. These tattoos are absolutely painless, economical and they are temporary. Natural Mehndi tattoos do not harm the skin.
Many people also opt for Black Mehndi tattoos. Black Mehndi tattoos do not belong to the Mehndi category at all. These Black Mehndi Tattoos are actually dyes. These Dyes can adversely affect your skin and can also cause scarring. It is best to stick to natural Mehndi when it comes to making bridal designs or fashionable Tattoos. Mehndi Tattoos have gained tremendous popularity in West because of its flexibility and wide choice of designs. These natural Mehndi tattoos are also preferred because they are absolutely safe on the skin. If you have a sensitive skin, it is best that you do a patch test before getting a temporary Henna tattoo.

Mehndi is widely used as a hair colorant. It imparts a reddish- orange tinge to the hair. Mehndi powder is mixed with decoction of tea leaves or tea dust to create a Mehndi paste. Many people also add other ingredients like lemon juice, powder of Banyan tree roots and a herb called Mahabhringraj to enhance the effectiveness of the Mehndi. Lemon juice helps in fighting dandruff, while banyan tree root powder helps in enhancing the density of your hair.
Mahabhringraj has been used in Ayurveda for preventing hair fall and for promoting well being of the hair.  Mehndi also has the ability to deeply condition your hair. Women who have extremely dry or frizzy hair should avoid using Mehndi for long time. In case you need to use Mehndi for conditioning your hair, then it is best to mix it with unsweetened yoghurt instead of using decoction of tea leaves.
Mehndi is also used in body art. You can create beautiful Mehndi designs using a Mehndi cone or Mehndi tube. These cones and tubes are commercially available. It is important to remove any traces of previous Mehndi when using it for Body Art. You can remove the old Mehndi design using salt water. There are numerous Mehndi stencils that are commercially available for tracing Mehndi designs on your body.

1.    Prevents hair fall:If you are suffering from excessive hair loss. Trying using 4 parts of mustard oil heated with one part of Mehndi leaves in it. Strain the leaves and use the oil regularly. You will see reduced hair fall in just about a month’s time. This oil also aids hair growth.

3.    Treats migraines: Migraines can be really disturbing and painful. Flowers from Mehndi plant can be mixed with vinegar and applied on forehead to get relief from Migraine.
4.    Cures heat stroke: Mehndi has cooling properties. You can apply paste of Henna leaves on your forehead and your hands and legs to reduce the body temperature and cure heat stroke. Ayurveda also prescribes paste of Mehndi leaves for combating fever.
5.    Treats skin conditions: Mehndi paste is used widely in treating scabies, Eczema, Vitiligo and Fungal infections.
6.    Provides relief from arthritic pain: Arthritis and osteoporosis patients can gain substantial relief by applying Henna powder mixed with sesame oil. It reduces inflammations and swelling. It facilitates mobility in arthritic patients.
7.    Treats Dysentery: Bark of Mehndi plant can be ground with fine paste and consumed in small quantity to stop loose motions.
8.    Conditions nails: Apply Mehndi paste on your nails and cuticles and keep in on for 30 minutes. Wash it off with tepid water. You can buff the nails and then apply Tea Tree oil or Olive oil for deep conditioning the nails. You will notice healthier nails after this treatment.
You can buy Mehndi in powder form or it is also available in ready to use paste form. It is best to use Neutral Mehndi in powder form as it is devoid of any chemicals and you can use it as per your needs. 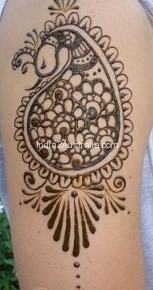 Indian Mehndi Designs are extremely intricate. These designs are more like drawings. They feature objects and animals. These objects or animals are placed in the centre of the design and then intricate and exquisite designing is done around them. Indian brides are adorned in Mehndi designs up to their arms and knees. Indian Mehndi designs are heavily dependent on symbolic representations. Mehndi is considered to be extremely auspicious ad it symbolizes festivity, joy and prosperity in Indian culture.

Mehndi patterns of Indian and Pakistan are mostly corresponds to  birds and tropical plants of their region.  Ornate, arabesque designs may consist of delicate paisleys , lace like tracery, peacocks , mangoes , leaves , heart and faces 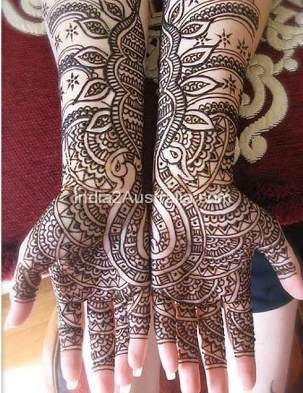 Arabic Designs are different from Indian Mehndi designs. These designs do not use intricate patterns. Arabic design uses simple floral patterns which are arranged in ascending or descending order. These designs are extremely easy to make. You can easily create an Arabic design on your hands by yourself. Arabic Mehndi designs do not cover the entire palm or hand like Indian Mehndi Designs. They live most of the area blank. Arabic designs are simplistic yet classy. These minimal designs create maximum impact with deep and thick bordering. Arabic designs are widely popular across the globe. Belly dancers combine traditional Arabic Mehndi designs with modern designs in order to create a dazzling look for their performance. Many Mehndi artists create more impactful designs by varying the shades in the design and the borders. They remove the dried Mehndi from intricate designs some time before removing the dried Mehndi on borders. This makes the borders and shading pop out of the entire Mehndi designs.

In ancient civilisations marking on the body which includes tattooing or making designs with henna or other colouring agents were considered as lucky charm to ward off evil eye or to guard against black magic. In India mehndi is a very important part of wedding ceremony and it is believed that the deeper the colour obtained on the skin the longer the love between the couples will last.

A Muslim never makes mehndi designs of animals or faces on hands because they pray with hands open wide and the palm facing the eye. Only floral or vine like designs are permitted as they will distract from prayers. But as hindus prays with their hands closed, they apply design of their choice. In a similar way religious symbols will be not be painted on feet.

Mehndi Tattoos: Mehndi is becoming quite popular for body art. Young girls create delicate floral designs on their arms. These designs symbolize amulets or arms bands. There is wide range of simple and exquisite designs available in the market for such body art. Boys have also started using Mehndi body art. Mehndi body art for men uses broad and strong designs. Most commonly used Mehndi body art designs for men are skulls, barbed wires and other heroic symbols. Mehndi is popular in body art because it is flexible and non-permanent in nature.

How to make a Henna Cone 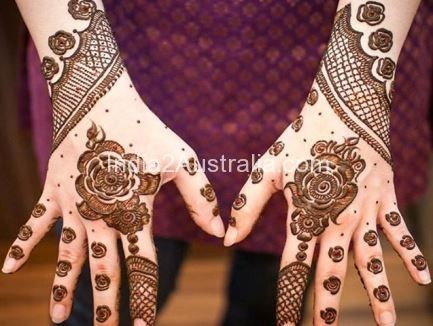 Popular every day Indian Mehndi designs are simple and easy to draw. They may not be as intricate as bridal designs, but simple enough to be attractive in a gathering.

The thumb rule for mehndi designs on feet is simplicity.  If those designs are intricate ensure that they match with the designs of the rest of the body. 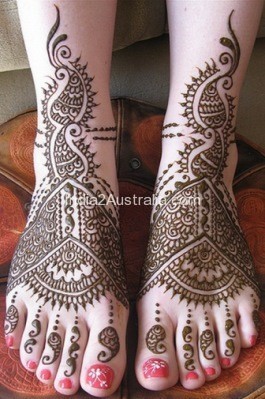 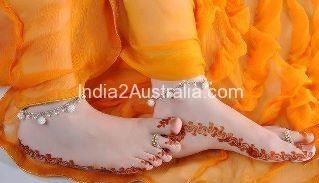 Talented Mehndi artists match the mehndi designs according to the bridal dress. There will be rhythm and style which will attract any gazing eyes. 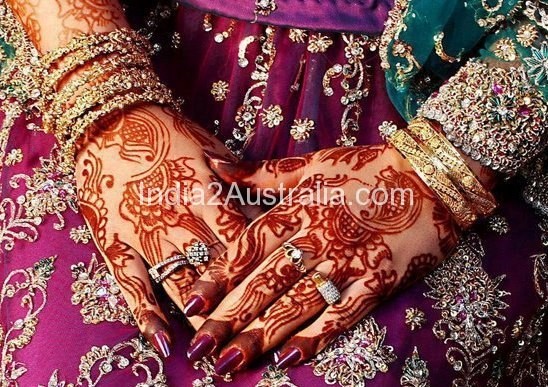 Mehndi designs can be made even more attractive by incorporating different colours with the henna . When you choose the colours, ensure that they are not harmful to the skin. These designs are beautiful to the core because of the contrast in colour selection. 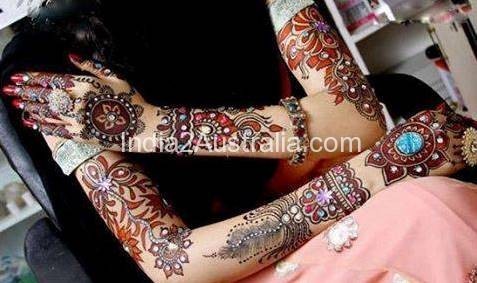