By admin on April 27, 2016Comments Off on NSW Police releases footage of Billu’s Indian Eatery attacker 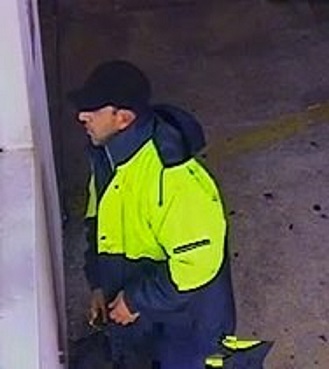 Police investigating an arson attack and a shooting at businesses at Harris Park in August last year have released CCTV of a man they believe can assist them with their inquiries.

Strike Force Selector is a Property Crime Squad investigation into a deliberately-lit fire at a hairdressing salon on Marion Street and a public place shooting targeting Billu’s Indian Eatery on Wigram Street.

It was about 4am on Tuesday 4 August 2015 that emergency services responded to the fire at the salon which had also spread to the newsagency next door.

Four people in upstairs units were forced to evacuate and detectives later found evidence of accelerant being used in the fire downstairs.

An estimated damage bill of about $1 million was caused.

Just three weeks later on Tuesday 25 August 2015, a single shot was fired into an Indian restaurant about 9pm, breaking through a window and hitting a shelf inside.

There were more than 30 diners and staff members inside the restaurant at the time of the shooting. No one was injured.

Strike force detectives have today released CCTV footage of a man they believe can assist with their inquiries into the incidents.

He is described as being of Mediterranean/Middle Eastern appearance and aged in his 50s.

Anyone who knows the man’s identity is urged to contact police.

“We have received information that a number of businesses had been stood over and extorted by a group of people in the Harris Park area during the year, but that victims were reluctant to come forward,” Det Supt Chapman said.

“I’d like to take this opportunity to urge any business owner in the area to come forward and talk to us; your information could be integral to furthering this investigation and you can remain anonymous if you wish.

“The deliberate acts of crime against these two businesses cannot be tolerated.

“It is extremely fortunate that no-one was hurt in either the fire or the shooting, because the potential for loss of life or serious injury was very real.

“In the case of the fire, CCTV from the premises has shown how quickly that fire ignited and travelled through the building. Four residents upstairs were lucky to escape.”

Police are urging anyone with information about these incidents to call Crime Stoppers on 1800 333 000 or use the Crime Stoppers online reporting page: https://nsw.crimestoppers.com.au/ Information you provide will be treated in the strictest of confidence. We remind people they should not report crime information via our Facebook and Twitter pages.