By admin on March 2, 2018Comments Off on Public Breast feeding debate erupts in Kerala over a magazine cover 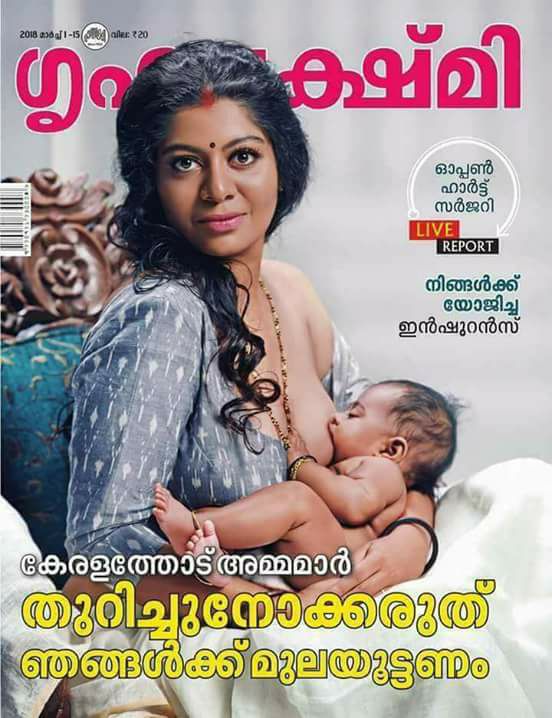 A magazine cover which shows a woman breastfeeding her baby has divided Kerala, with people debating against and in support of it. A simple magazine cover in the March issue of Grihalakshmi, published from Kerala, the southern state of India with a headline “Mums tell Kerala: don’t stare – we need to breastfeed” has caused outrage in the conservative Kerala community which values pretence of moral values more than anything. The sole reason for the publication was to increase the circulation as Malayalees will buy anything that shows a bit of naked skin. But on a positive side, it is opening up discussions on usually covered up subjects.

Gilu Joseph, the model appeared in the cover is ridiculed in both social media and TV channel discussions. But Gilu stands by her decision to pose for the magazine cover saying, “I thought, what would be wrong with me doing this?” she said. “I am proud of my body, so why not use it for a noble cause?”

Gilu on a video posted in her facebook page asks “which god will be angry if you feed your child?”

Gilu Joseph also added that the point of the cover and the campaign was, “breastfeeding is a beautiful thing and you don’t have to be worried”.

The media around the world including BBC and The Guardian have published news stories about the Grihalakshmi Magazine cover. The campaign also has drawn criticism for featuring an unmarried model rather than an actual breast feeding mother. The 27-year-old Model Gilu Joseph is unmarried and have no children of her own. Many raising their voice against it saying that it is cheap sensationalism and exploitation. But many others describe it as a “path-breaking step”.

Breastfeeding in public is considered as contentious issue around the world. Understandably many mothers feel uncomfortable doing it in public. But in Gujarat, the western state of India, women usually breast feed in public without any hesitation.

While Kerala erupts over the public breast feeding question, there are people making money by posting their breast feeding videos in Youtube, exploiting a special market constituting of people who likes to watch them. But at the end of the day the question remains, should women breast feed in public?  There are people who don’t hesitate to rape a 6-month old child and kill to satisfy their lust walking around in public places –  could a breast feeding mother feels safe doing so?  Should the woman risk their life by doing so?

Public Breast feeding debate erupts in Kerala over a magazine cover added by admin on March 2, 2018
View all posts by admin →