By admin on November 23, 2013Comments Off on Roses and Rose diseases

Roses belongs to the plant family Rosaceae which comprised of more than 100 genera, which also includes flowers of fruit bearing trees like Apple, pears, apricots and plums. The Rose family derives its name from its largest genus’ Rosa’ 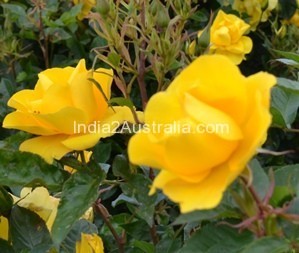 Romans were rose lovers. Roses represent romance and they seduce us with its fragrance and delicate petals. Roses were introduced to England and France by the Romans. Many varieties of roses were produced through breeding over the centuries.  In the late 18th Century repeat flowering was introduced to roses in Europe by breeding with the Chinese variety Rosa Chinensis from China. In 1867 Hybrid teas (Large flowered ) were introduced. 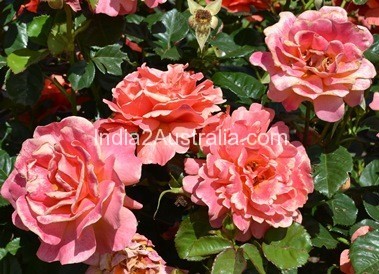 Cluster roses known as Floribunda roses were introduced in 1875. A cross of roses developed from this cross is known as Polyantha roses. These two classes Hybrid Tea and Floribunda account for bulk of the roses offered today. 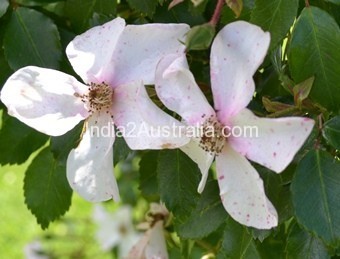 Today most roses are cultivated varieties. Cultivated roses, generally result from selective hybridisation or breeding.  Cultivated varieties are usually referred to by their registered trade, or accepted name and placed in single quotes such as ‘Peace’ Rose. In addition, because trade names often change from country to country, rose cultivars are also given a code name, represented by a few uppercase letters of the hybridizer’s name, followed by a few lowercase letters indicating the specific cultivar. For instance, ‘ tropicana’ is known as ‘ Superstar’ in Europe.  Is registered with the code name ‘ TANorstar’ because of hybridizer is Mathis Tantau or Holstein , Germany. Finally trade names of roses are often registered with a trade mark, such as ‘Peral Meidiland’ . 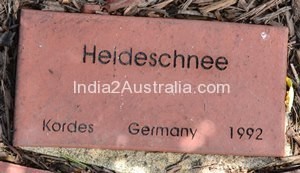 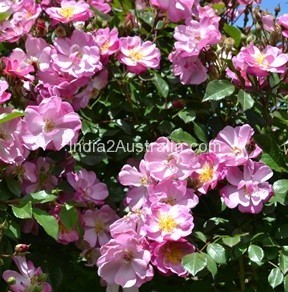 Container Roses  – Smaller type roses like miniature and polyantha roses are best selections for planting in a container. 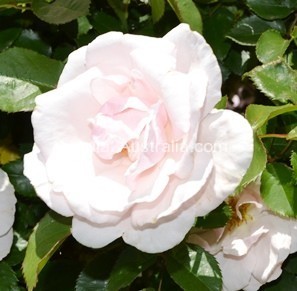 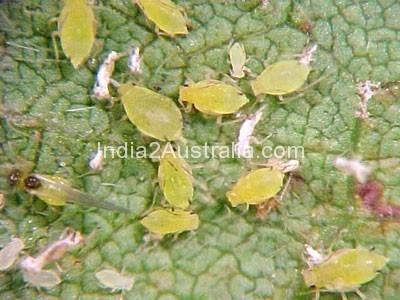 Aphids or greenfly is a soft-bodied insect about the size of a large pinhead which sucks the sap of the new shoots. It can be green or reddish depending on what it has been eating. They are capable of multiplying into thousands within a few days.

There is no need for any stronger insecticide to kill aphids. . Pyrethrum or one of its synthetic equivalents  will be enough. Ladybirds and lacewings greedily devour aphids. They are best altenatives for those looking for biological control methods. 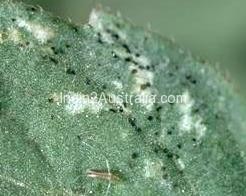 Thrips of thunder flies are almost invisible tiny black specks and like aphids they become a threat, when they appear in large numbers, most usually in warm and dry weather. They sneak into the flower buds as the petals begin to unfold.

Any insecticide will kill them but pyrethrum is just fine, but you have to spray every few days while the outbreak lasts to catch them before they get inside the flowers.

Usually only a few will be munching on the leaves. If there are lots of them, biological control is the best. The bacterium Bacillus thuringiensis spores can be bought under trademarks as Dipel, mix them up in water and spray them on like any other spray. The caterpillars will die of fatal disease. Carbaryl  and Marvrik are insecticides available against caterpillars. 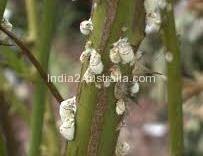 Scale insects spend most of their time squatting in one spot on the stem of their host plant and sucking the sap, protected from the enemies by a shield of wax. White scales are the most common on roses. Their wax shields effectively protect these insects from insecticides. Methylated spirits scrubbed over the scale with an old tooth brush will be effective in controlling them. It is a lot easier to spray it with white oil. Do a follow-up spray about a fortnight later. The dead scale will hang on a while before falling off. 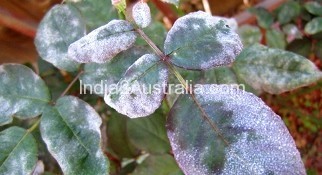 It is most common during periods of drought and at the beginning and end of the season, when the days are warm and nights are cool. Mildew usually begins its attack against the young growth. It covers with greyish powdery looking mould that puckers up and grossly distorts the leaves.  The mould is an advanced symptom. Mildew growth may also be found on the stems, flower stalks, calyces and petals

Heavily infected flower buds frequently fail to open properly A day or two before it appears the leaves will show a slight puckering and distortion.

Fungicidal soap and sulphur are effective against Mildew. Ensure that the fungicidal soap is soft potash derived soap rather than an ordinary soda based one. Sodium is not a good addition to the soil, especially for roses.

Wettable sulphur is effective, but it has two serious drawbacks. First it is inclined to build up in the soil, to the detriment of the soil especially the worms. Sulphur can’t be used in hot weather, as it will burn the foliage it is supposed to protect.

Bordeaux mixture is also effective against Mildew. The most favoured mildew fungicides are Triforine and Myclobutanil . 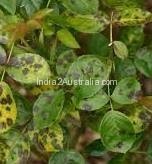 It is a disease of moist climate. Its spores need warmth and moisture to germinate. Black spots develop slower than mildews but mildew lives on the surface of the leaves but Black Spot gets inside.

If you see black spot starting to appear, the first thing to do is to strip every infected leaf and burn it to contain the infection.  Systemic fungicides like Triforine and Myclobutanil are effective against black spot.

Open up the rose bush to create more air movement through the middle and that minimises the risk of humidity.

Watering the rose foliage creates the right environment for the proliferation of the disease, so never water the foliage. Always water around the roots of the rose and give it a good soaking. There are plenty of safe and organic ways to treat black spot. Try using two teaspoons of bi-carb soda in 5 litres of water, add a couple of drops of detergent or a couple of drops of seaweed extract. This makes an excellent and inexpensive fungicide. Or use Bordeaux mixture or one of the other copper based fungicides. Nutrition and spraying will control most black spot but from time to time some bushes will be chronically affected. The only thing to do is to rip these out so they don’t infect any of the others. 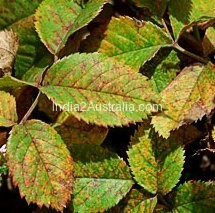 Rust is rare in Australia, even though it is disease found in hot and humid regions.  The first symptoms are not very obvious dark mottling on the upper side of the leaf and then the characteristic bright orange dots appear on the underside, soon spreading to the rest of the leaf. The first thing to do is to remove all infected leaves and burn it. Then spray with the fungicide.  The most effective fungicides are sulphur and heavy metal based like Zineb and Mancozeb.

Honey fungus and  cinnamon fungus are most common that destroys the roots. Both are not common in Australia which can cause the sudden death of the plant. Removing the plant including the whole of the roots and destroying it the best thing to do. 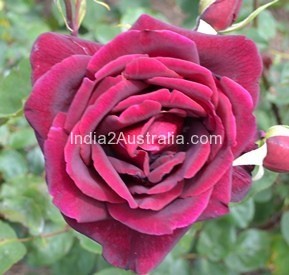 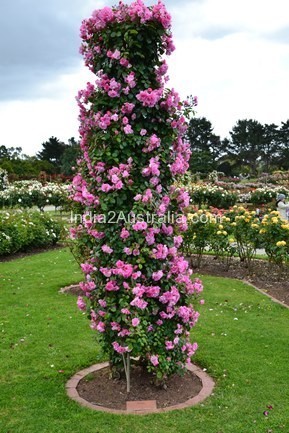 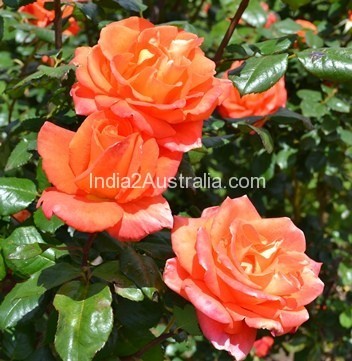 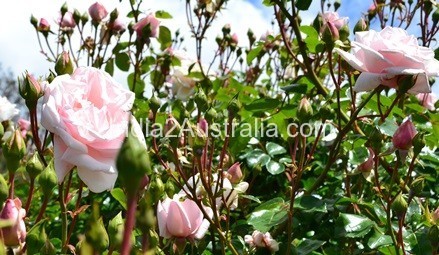 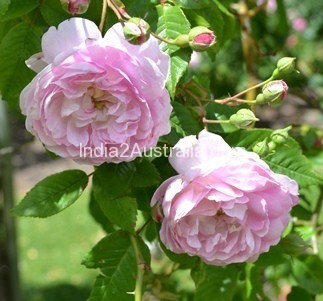 Roses and Rose diseases added by admin on November 23, 2013
View all posts by admin →