By admin on September 19, 2017Comments Off on Sagardeep’s son will wear a turban in School – A wrong decision indeed 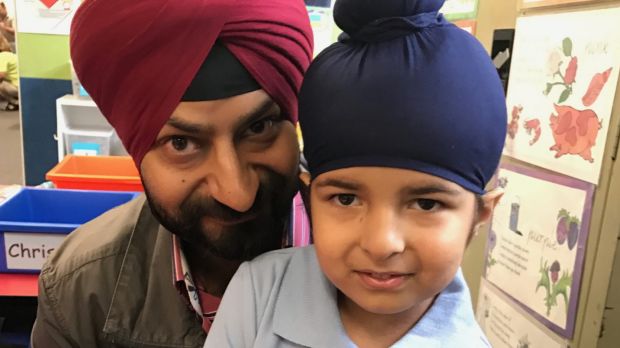 The five-year-old Sidhak Singh Arora, was due to start prep at Melton Christian College, in Melbourne’s north-west, this year. But his head gear does not comply with school’s Uniform policy, which prevents students from wearing any type of religious head covering. Based on that the school refused entry for Sidhak. Sagardeep wanted his son to attend the Christian school because of its good reputation. Sidhak’s cousins already attend the school, although they do not wear turbans. His family took the fight to VTAC a few months back.

Sagardeep Sigh told the media that the case will set a precedent for everyone else who want their children to practise their religion. Sidhak currently attends a State School, where he can wear a turban. Now the family will have to contact the school with the new ruling to resolve the issue. But the school can still refuse him entry on other grounds.

Needless to say, this is a ridiculous ruling with overbearing consequences on future generations. This is not an issue of religious freedom in schools, but infact limiting the freedom of children and allowing parents to pressurise their children to wear outdated and comical religious attires. Young children should be given an opportunity to feel that they are equal in all senses and School Uniforms are a measure to achieve that.

Most religions have their own customs, symbols and traditions. Some of these symbols and traditions may be confronting for others. Imagine your classroom with all the girls wearing a Niqab showing only their two eyes. Even teachers may find it confronting to address such a class. What about the niqab wearing children? Don’t they deserve the freedom at least at such a tender age. As they grow enough to make their own choices, they can wear it if they wish. Allowing religious symbols and attires in schools will open up an opportunity for parents blinded by religion to enforce their whim on their children.

Children who have no wish to wear these religious symbols will be pressurised by parents and at the end we will end up with a nation that lacks tolerance for each other. This will only enforce the belief in children that because of their religion they are different from others. Let the children grow above the narrow confines of religion. The right to freedom of religion should not mean that one can exercise that right at any time or place without limitation. Limitation of religious clothing in schools should be viewed as reasonable and infact a school with a School Uniform policy like the Melton Christian College should have been allowed to stick to their argument.

The question here is – do the parents have the right to enforce religious clothing on children, who are unfortunately born into a religion without their consent. Should they rather be taught the lessons of equality in classrooms instead of the outdated and never going to be updated religious lunacy.

Sagardeep’s son will wear a turban in School – A wrong decision indeed added by admin on September 19, 2017
View all posts by admin →