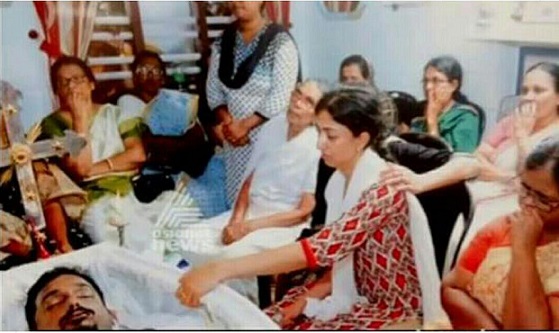 Sofia Sam, 33, and Arun Kamalasanan, 35, are on trial for murdering Sofia Sam’s husband Sam Abraham at his Epping home in October 2015. They have both pleaded not guilty. We are bringing you a coverage of what happened in the Melbourne Supreme Court during the 1st week of trials.

The trial of Sofia Sam and her lover Arun Kamalasanan has begun before Justice Paul Coghlan, in the Supreme Court in Melbourne on 29th January 2018.

Kamalasanan and Sofia Sam wrote diaries and exchanged the diaries between them during their illegal affair. Diary entries were read aloud in the Supreme Court by Prosecutor Kerri Judd QC,  to prove that they were carrying out an illicit affair for two years which resulted in the murder.

Entries from Sofia’s diary are as follows

“Brought this diary for $3, you know why I need this diary?  it’s a secret I will tell you later OK.”

“We never know why we like someone more than others why……… we love someone without a reason. Why we feel happy for them……..some relations has no explanation.”

“Was waiting…with your memories on my mind I’m waiting for you.”

“You are unable to meet me. I’m unable to live. Miss you a lot. What kind of senselessness is this? I fail to understand.”

” I wish to sleep in your arms but I can’t do that. I want to be yours but you are not mine. You are the one for me but you don’t belong to me.”

“I do remember you first in this day. I’m the lucky girl in this world. But on the other hand I am still the unlucky girl.”

“Miss you a lot dear. Can you hold me tight? I want to drift away in your love. I want to forget myself in your arms hug me tight…hold me nude”

“Why am I made with a heart of rock. Why I am so cruel. Why am I so cunning…why you make me a bad person”.

“I wish to sleep in your arms but I can’t do that, I want to be yours but you are not mine, you are the one for me but you don’t belong to me,”

Entries from Kamalasanan’s electronic diary are as follows

“It may take thousands of books to describe how much I love my love, my eternal love,” he wrote.

“I am afraid ……… how many more days I need to live in pain without her?”

After arriving in Melbourne, Kamalasanan wrote in his diary, “Met my love for the first time in Melb. after seven months. Yes, I reached near her. A promise, to be there, wherever you go,”

“She’s best match for me in all ways. What to do. I am sure that one day she will be mine, this life or next. I will wait for her. I am afraid……how many more days? ’ I need to live in pain without her.”

Prosecutor Kerri Judd QC told the jury that Mr Kamalasanan had come to Ms Sam’s house on the night her husband died and brought Cyanide with him, though there was no sign of forced entry. Kamalasan admitted to the Police in an interview that, he had some knowledge of how Cyanide was extracted.  Sam, his wife and their six-year-old son slept in the same bed on that fateful night. Even if Sofia Sam did not administer the poison herself, she must have known and had been complicit in what was going on, QC told the Court.

An autopsy performed on Abraham found high levels of cyanide as well as the tranquilliser clonazepam.

Kamalasanan’s flatmate Aji Parameswaren’s testimony revealed that Ms Sam had visited Mr Kamalasanan at his St Kilda flat two or three days after he moved to Melbourne. Kamalasanan allegedly told Aji Parameswaran not to tell anything to his family in India about Sofia Sam. In early 2015 the pair were seen having lunch sitting very close, shoulder to shoulder. During the period of 2014 and 2015 Sofia Sam sent four money transfers to India, using Mr Kamalasanan‘s address. The pair operated a joint bank account since 2014.

Kerri Judd QC told the jury that there are two possible ways Sam was killed. He may have drugged with sleeping pills before being administered with Cyanide. Kamalasanan administered Cyanide by sneaking into the house and pouring orange juice laced with Cyanide into the mouth of the diseased. Or Sofia Sam put Cyanide in either an avocado Shake or an Orange Juice she prepared for him. The prosecutors also alleged that Sofia Sam plotted with her lover Kamalasanan to murder Sam.

Kerry Judd QC also told the Jury that Sofia Sam and Arun Kamalasanan knew each other from their college days in India and they were having an affair at the time of the murder. The jury also heard that Mr Abraham’s car was transferred into Kamalasanan’s name following his death.

The Jury was given a detailed account of what happened on the day of Sam Abraham’s death. On the morning of his death, Sofia Sam telephoned her sister Sonia. Sonia and her friend Anu, both Nurses rushed to Sofia’s home. Both frantically tried to give CPR to Sam Abraham but it was difficult to administer CPR as there was a lot of blood and foam coming out of his mouth. An emergency call was made after the pair arrived and the court was played the audio recording of it. Several people were speaking to the operator and a woman believed to be Sofia Sam could be heard sobbing in the background. The emergency team arrived at the scene and took over the CPR. Paramedic Steve Hoe checked the body temperature, which was at 27.7 C, ten degrees lower than normal. Sam was pronounced dead and the Police were called.

The jury was shown photos of Kamalasanan meeting Sam in the CBD before having lunch together at a food court. The detectives spied on Sofia and Arun duo for months, after the murder. Sofia and Arun who ran errands, shopped for groceries together and met for lunches. The prosecution has produced surveillance evidence of more than six months.

Dr Michael Burke of the Victorian Institute of Forensic Medicine, gave evidence on detailing his research into the involuntary swallowing of something and reflex people have when sleeping.  He told the court that putting liquid into a sleeping persons’ throat causes him/her to swallow it. Dr Burke conducted the autopsy on Mr Abraham and found the cause of death was cyanide, which was found in the 33-year-old’s stomach.

Toxicology expert and Associate professor Naren Gunja told the Jury that Sam Abraham had a reading of 35mg/l of Cyanide in his blood and high level of Cyanide were found in Abraham’s liver and stomach. Naren Gunja also informed the court that this level of Cyanide can enter the body only through ingestion. Gunja said absence of erosion and red spots in Sam’s food pipe points to the possibility that Cyanide was administered in small doses, not more than 50ml at a time into the mouth of the victim while he was sleeping without rousing him. It is possible as Sam Abraham was sedated before being administered with Cyanide laced Orange Juice or a poisoned avocado shake. The traces of tranquilizer Clonazepam and lead were also found in Sam’s body in during autopsy.

High level of Cyanide poisoning in one dose would often bring vomiting and seizures before the victim would go into coma and cardiac arrest. The Cyanide poisoning would turn the effected person into blue and obviously would be thrashing about and convulsing before death. Absence of vomit points to the fact that Sam was poisoned in small doses.

Charlie Hebdo – Freedom or Foolishness?
Mooladhara Chakra
Jora 10 Numbaria
Why I don’t touch the feet of my Guru?
Jatinder Panesar Charged over the Fatal Crash in S...
Do you know when was the first time Mahatma Gandhi...
Holey dollar – Australia’s first coin