By admin on February 22, 2015Comments Off on Shikhar Dhawan, The man from Melbourne

MCG is the mother of all Cricket Grounds. Fortunately for Shikhar Dhawan, the Indian batsman of ICC World Cup 2015 match against South Africa, has more than one reason to celebrate. It was a big day as he hammered 16 boundaries and two sixes during his 146-ball stay at the crease. Moreover Melbourne is second home to the skilful batsman from Delhi.

Shikhar Dhawan is married to Ayesha Mukherjee of Melbourne since 30th October 2012. The marriage took place as per the Sikh Wedding customs in Vasant Kunj Gurudwara, South Delhi. Ayesha Mukherjee has two daughters from a previous marriage. Ayesha was previously married to a business man from Melbourne. The love of sport in general and a deep passion for cricket were the common factors that connected the batsman and the bride.  Ayesha Mukherji is half Bengali and half British and prides herself as an amateur boxer. Dhawan’s son Zoravar was born in Melbourne on 26th December 2013 and the two daughters from Ayesha’s previous marriage Rhea and Aliyah, make it a big happy family. 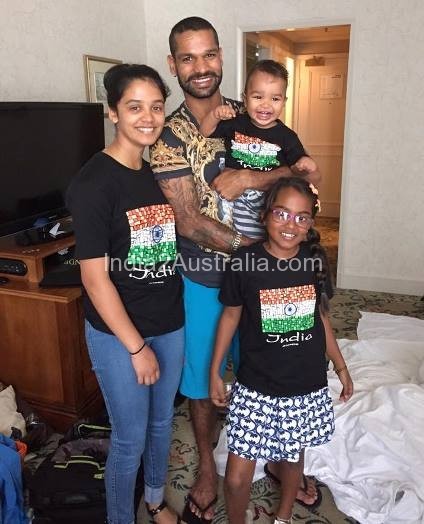 Shikhar Dhawan with family in Melbourne

Ayesha Mukherjee, a practicing Hindu,  lives at the Melbourne Suburb of Narre warren with her twelve year younger husband.

What you may not know about Dhawan

Another passion both Dhawan and his wife shares is passion for Tatoos. Shikhar has 5 Tattoos including a tiger on his shoulder and the name of his wife on his wrist. We are not going into the details of Ayesha’s tattoos.

Shikhar Dhawan met his wife though FaceBook. Bowler Harbhajan Singh, who was a common Facebook friend of both introduced the duo. Dhawan was fallen for her Facebook profile on first sight and it was only a matter of time a friend’s request was sent, which was accepted in no time. That was the beginning of an amazing relationship.

They got to know each other very well as both could easily afford the ticket fares from Melbourne to Delhi, and Ayesha made it a point to attend Dhawan’s Ranji Trophy and IPL matches.

Though Dhawan’s parents were dead against their union, due to the rather large age gap and her baggage of a previous marriage, finally they had to succumb to their wishes. Despite their parent’s reluctance to accept the relationship, both persisted and got married on 2012.

Shikhar Dhawan, The man from Melbourne added by admin on February 22, 2015
View all posts by admin →