By admin on September 22, 2012Comments Off on Shiva Vishnu Temple , Carrum Downs , Melbourne 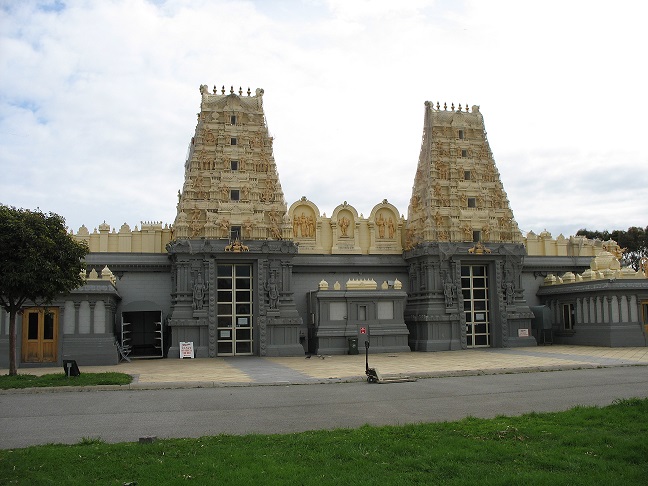 The Foundation stone for the Shiva Vishnu temple at Carrum Downs was laid on 5th June 1988 by Hindu Society of Victoria. Over the years the temple has grown into prominence, as a place of worship for Hindus all around Melbourne. This temple is conceived and built as a traditional Hindu temple in which Pujas and rituals are conducted similar to that of temples in India. After the construction of the large auditorium and Canteen, celebrations of marriages have become a common feature here. If Hindus in Melbourne crave for an Indian temple ambience or want to celebrate Hindu festivals like deepavali , holi, Ramnavami etc. with the community, this is where they should be.
Shiva Vishnu Temple ; Auditorium and Canteen

The vision for the temple includes making it a cultural destination for Hindus in Melbourne. As a first step, a Library, auditorium and a canteen is set up. The temple management gives strong emphasis in celebrating Hindu festivals in the traditional way .
The temple library has plenty of Hindu religious texts. The Library Opening Hours are as follows
Library Timings
The Temple  conducts Hinduism classes on every month. Friday evening Hinduism classes are in English, catering for 5-14 year olds. Classes will be conducted on 1 st and 3 rd Fridays of the month for Primary school children and 2 nd and 4 th Fridays of the month for Secondary school children, between 7.30pm-9.00pm. The interested devotees are requested to contact Temple Manager on (03)97820878 or the Spiritual subcommittee chairperson Mr S. Kugathasan on 0430366909.
The Peacock at Shiva Vishnu Temple Carrum Downs, Melbourne

The Temple  conducts Bhajan Classes. They are either on Fridays, Saturdays or Sundays. If you are interested in either participating or arranging a group bhajan, please contact Kugan on 0430366909.

Indian Restaurants in Australia are infamous for its hygienic standards. The Canteen at the Shiva Vishnu temple is a notable exception. Here the vegetarian food is prepared in a neat , clean and hygienic environment. It is run mostly by dedicated volunteers who are interested in maintaining the high standard set by the management. All the profit from the canteen is used for temple projects and the daily running of the temple.