Should Sikhs be allowed to carry Kirpan in Australia?

By admin on February 14, 2015Comments Off on Should Sikhs be allowed to carry Kirpan in Australia? 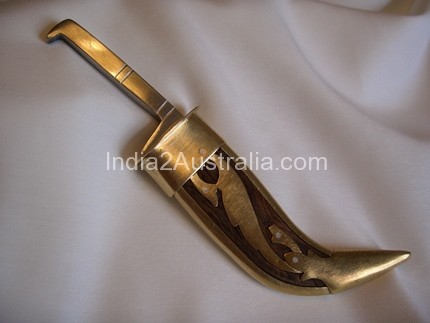 Initiated Sikhs are mandated to wear the five articles of faith. The 5 items are: kēs (uncut hair), kaṅghā (small wooden comb), kaṛā (circular steel or iron bracelet), kirpān (sword/dagger), and kacchera (special undergarment). On 30th March 1699, at Anandpur Sahib in Punjab, the 10th Sikh Guru, Gobind Singh baptised the the five beloved ones, who in turn baptised Gobind Singh himself. The last name, Singh, meaning lion, is given to baptized Sikh males, and the last name Kaur, meaning princess lioness, is given to baptized Sikh females. Guru Gobind Singh instructed the initiated Sikhs to wear the 5K’s. Sikh community carry on with this tradition even today. As the Sikh population in Australia, USA and Canada increases, the issue of Sikh religious symbols has become a biting point. Do the Sikh community have to carry on with the traditions of 5K’s even in this 21st Century, which many consider as irrelevant, un-necessary and out of place?

In 1699, after the baptising ceremony, Guru Gobind Singh addressed the crowd,

” From now on, you have become casteless. No ritual, either Hindu or Muslim, will you perform nor will you believe in superstition of any kind, but only in one God who is the master and protector of all, the only creator and destroyer. In your new order, the lowest will rank with the highest and each will be to the other a bhai (brother). No pilgrimages for you any more, nor austerities but the pure life of the household, which you should be ready to sacrifice at the call of Dharma. Women shall be equal of men in every way. No purdah (veil) for them anymore, nor the burning alive of a widow on the pyre of her spouse (sati). He who kills his daughter, the Khalsa shall not deal with him.”

Obviously the intention of the Guru was not to replace one set of ritual with another. Guru was giving birth to a creed of most advanced reformist followers the world has ever seen. Sikhism was a religion that has evolved with the need of the time. This was in response to the threat the wider community including the Sikhs were facing from the Mughals.

But since then, unfortunately Sikhism has gone down the path of other backward looking religions like Islam. The hue and cries that surfaces in the Sikh community when Kripan gets banned in certain venues due to security reasons, only shows to what depth the followers of this religion has fallen.

The Significance of Kirpan for Sikhs

Kirpan is the mixture of two words Kirpa and aan . Kirpa means mercy and aan means brought forward. It is the mercy of God brought forward in the form of a sword. But now a days wearing Kirpan has more to do with faith and it has become a religious symbol that unites a group of people who believes in Sikhism.

A bystander may feel threatened in the presence of a Kirpan wearing Sikh, especially in Western countries. It is also worth noting that, whenever an Islamic terror incident happens in Western countries, members of Sikh community also become a target of hate crimes as they are taken for Muslims. This is mainly because of the lack of awareness of the general community about Sikhs and their customs and traditions. It is very much unlikely for a Sikh to use a Kirpan to violently attack someone, provoked or otherwise. What prevents the Sikhs using an article of faith for violence is that very faith that makes them carry it with them. Sikhs consider it sacred and it is an integral part of how Sikhs practise their faith. But is it really necessary to follow those traditions in the name of the religion? Is it high time, the Sikh community rise above the narrow confines of religion and accept that, this world has changed quite a lot in the last 500 years.

The word ‘superstition’ is defined as – a belief or notion, not based on reason or knowledge, in or of the ominous significance of a particular thing, circumstance, occurrence, proceeding, or the like. Insisting on wearing the 5K’s which is irrelevant and unnecessary in the 21st century is in fact equate to defying the teachings of the Sikh Gurus. Sikhism was born out of the need to cleanse the society from the superstitions and unnecessary customs and traditions. But five hundred years after the creation of the religion, Sikhism has fallen in the same trap, which the founders of the religion wanted to free them from.

In 21st century anyone let alone Sikhs insisting on wearing the 15th century attire which was created for a specific purpose, can only be termed as idiotic. What Sikh community needs today is another Guru who will re-educate them the values on which Sikhism is based. As long as the religion is under the grip of self-serving individuals, that is not going to happen.

NB: In Australia wearing Kirpan is allowed with certain conditions. But it is not allowed in Schools

Should Sikhs be allowed to carry Kirpan in Australia? added by admin on February 14, 2015
View all posts by admin →