By admin on October 15, 2015Comments Off on Sikh Genocide Remembrance March in Melbourne 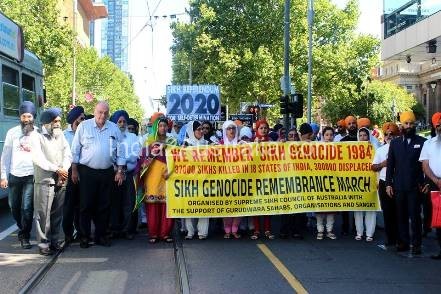 Annual Sikh Genocide Remembrance March is planned on 31st Oct 2015 starting from Alexandra Gardens Melbourne (next to Yarra River) and will finish at Flagstaff gardens.

Thirty years later, the government stubbornly refuses to admit its fault in the religious massacre, despite enormous evidence to the contrary

1984 remains one of the darkest years in modern Indian history. In June of that year, Prime Minister Indira Gandhi ordered a military assault on the most significant religious center for the Sikhs, Darbar Sahib (i.e., the Golden Temple) in Amritsar, Punjab. The attack killed thousands of civilians. On October 31, 1984, Mrs. Gandhi was assassinated by two of her Sikh bodyguards.

Her assassination triggered genocidal killings around the country, particularly in India’s capital city, New Delhi. TIME reported on the massacres just days after the violence subsided:

Frenzied mobs of young Hindu thugs, thirsting for revenge, burned Sikh-owned stores to the ground, dragged Sikhs out of their homes, cars and trains, then clubbed them to death or set them aflame before raging off in search of other victims.

Witnesses watched with horror as the mobs walked the streets of New Delhi, gang-raping Sikh women, murdering Sikh men and burning down Sikh homes, businesses and Gurdwaras (Sikh houses of worship). Eyewitness accounts describe how law enforcement and government officials participated in the massacres by engaging in the violence, inciting civilians to seek vengeance and providing the mobs with weapons.

The pogroms continued unabated, and according to official reports, within three days nearly 3,000 Sikhs had been murdered, at a rate of one per minute at the peak of the violence. Unofficial death estimates are far higher, and human rights activists have identified specific individuals complicit in organizing and perpetrating the massacres.

“Almost as many Sikhs died in a few days in India in 1984 than all the deaths and disappearances in Chile during the 17-year military rule of Gen. Augusto Pinochet between 1973 and 1990,” pointed out Barbara Crossette, a former New York Times bureau chief in New Delhi, in a report for World Policy Journal.

Thirty years later, those who survived the violence have yet to receive any semblance of justice. Most perpetrators have yet to be yet to be charged and held accountable for their crimes, and many of the affected families continue to live in poverty and disenfranchisement to this day. The Indian government’s formal position for three decades has been that accountability comes in the form of silence.

The Indian government is certainly not the first to massacre its own citizenry. Yet, as Crossette points out, so many of the nations complicit in ethnic cleansing – including Chile, Argentina, Rwanda and South Africa – have recognized the importance of addressing past atrocities.

Yet the Indian state stubbornly refuses to admit its fault and take ownership of its participation in mass violence, despite enormous evidence to the contrary.

It would help if we started with language.

The term commonly used to describe the anti-Sikh pogroms of 1984 is “riot.” The word riot is problematic because it implies random acts of disorganized violence. It invokes images of chaos that overwhelms law enforcement and the government that is there to protect its people.

The anti-Sikh violence of 1984 was not a riot. The massacres were not spontaneous, anomalous or disorganized. According to a report belatedly commissioned by the Government of India in 2000, “but for the backing and help of influential and resourceful persons, killing of Sikhs so swiftly and in large numbers could not have happened.”

Our failure to properly define the problem has also meant that it has not received the appropriate response; neither the Indian government nor the international community has treated the violence for what it is – a crime against humanity.

If we were to accurately update the language we use to describe the anti-Sikh violence, maybe we could then finally begin a proper discussion about accountability and reparations. Acknowledging the malicious intent underlying the massacres is the first step towards reconciliation.

Although 30 years have now passed, India has a historic opportunity to make amends and seek reconciliation while those directly affected by the violence are still alive. It behooves the Indian state to seek closure on this issue, while the primary stakeholders – survivors and perpetrators alike – are around to reach a resolution. Until then, political stability will remain a challenge as minorities in India, including its more than 21 million Sikhs, will continue to feel alienated and targeted by their own government.

Sikh Genocide Remembrance March in Melbourne added by admin on October 15, 2015
View all posts by admin →