The death of Indian student in Maribyrnong detention

By admin on February 19, 2014Comments Off on The death of Indian student in Maribyrnong detention

Dalvir Singh, 27, died at the Maribyrnong Immigration detention centre here on February 13th allegedly by hanging himself. The Government is yet to release more details about the incident as it has to follow certain procedures before doing that. The Indian community members have sought more information from the government over the tragic incident and expressed their concern. It is sad to see a young life lost, whatever may be the reasons behind it.

Lashing out at Immigration Minister, Tim Singh, former mayor of City of Darebin, said, “We need to take a humanitarian approach. Australia needs to be sympathetic towards the plight of students to rebuild confidence in our education industry and build Australia’s reputation. Such a cold response from the government will not help build bridges.”

But this is not the time for blame game as it is a fact that many students from India are here solely for the purpose of exploiting the loop holes in the system to gain Australian PR. Australian Immigration department is one of the worst managed white elephants in Australia infamous for its inefficiency.  It is a practise for successive governments to highlight the illegal boat arrivals to take the lime light out of the underperforming, possibly corrupt and inefficient immigration department. It is easier for international students to gain Australian PR after the completion of their studies here. Many educational institutions have come up solely for the purpose of milking this market sans any ethics.

The government expressed its sympathy to the family and friends of the deceased man and will provide support to the police and other authorities as appropriate to assist with their investigations. 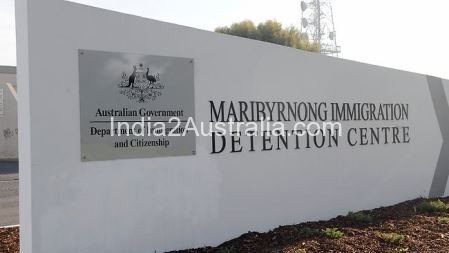 Maribyrnong Immigration Detention Centre is an Australian immigration detention facility in Maribyrnong, Victoria. The centre was originally opened in 1966, as the Maribyrnong Migrant Hostel, then later the Midway (Migrant) Hostel in the late 1960s. The Phillip Migrant Hostel was added later.

The current Maribyrnong Immigration Detention Centre was opened in 1983, set up for people who have over-stayed their visas, had their visa cancelled, or who have been denied entry into the country through international airports and seaports.[1] Maribyrnong Immigration Detention Centre is operated by Global Solutions Limited, formerly part of Group 4 Securicor on behalf of the Australian Government.

The death of Indian student in Maribyrnong detention added by admin on February 19, 2014
View all posts by admin →